Question—Would you kindly give me your opinion of Western Savings and Loan Association of Winnipeg? Is this a safe company with which to invest?—O. S. W., Ninette, Man.

Answer—Western Savings and Loan Association operates under the jurisdiction of the provincial authorities in Manitoba, Saskatchewan and Alberta. The financial statement of the Association has shown increasing business and an improved condition over the past few years, and at December 31, 1932, assets had increased to $375,968 from $169,620 shown at December 31, 1930. Over this period, the investment in first mortgages increased from $159,871 to $261,235; investment in Dominion of Canada bonds had increased from $5,668 to $93,195, and cash from $4,081 to $13,263. During the past year, the company has

made loans on certificates which totalled1 $7,975 at December 31. 1932. The investment in Dominion of Canada bonds has ¡ increased by $73,000 since September. 1931. These assets are the security behind the liability of the Association to certificate holders. This liabilitv has increased from ! $132.098 at December 31. 1930. to $285,685 at December 31, 1932, and naturally increases as more certificates are sold and additional payments are made on outstanding certificates. The surplus in favor of certificate holders, that is the difference between assets securing the liabilities of the Association on certificates and the actual amount of liabilities, has increased from $37.532 at the end of 1930 to $90,283 at the end of December, 1932. The first mortgages in which the Association has invested its funds are on improved urban properties occupied by the owners and these properties ; are located in the larger centres of Western 1 Canada.

It is, of course, impossible to predict what will happen over the next ten years. Everything depends upon the ability of executives of the Association to make a judicious selection of mortgage risks and to keep arrears on mortgages at a minimum. So far the Association appears to have made good progress, and we have no reason to believe that under normal conditions it cannot continue to do so.

To secure that full advantage from an investment with Western Savings and Loan Association, it is necessary for you to maintain periodic payments throughout the whole term of the contract. It would take several years before a withdrawal value would be equal to the amount of money that had been paid in, and if you found it necessary to discontinue the periodic payments during the first few years, your investment would not prove satisfactory. Before entering into any contract with a savings and loan association of this kind, the investor should fully consider his ability to complete his part of the contract. In this type of savings plan the experience has ; been that many investors are unable to continue their payments to maturity.

Question—I have received $5,000, as proceeds of a life insurance policy, which I wish to invest in a safe bond bearing a fairly good rate of interest. I have been advised to buy six per cent bonds of the Province of Saskatchewan, maturing March 15, 1952. While I would like a good return on my investment, I am not in a position to take any risk. What would you advise?—A/. A. W., Atwater, Sask.

Answer—Investment of the $5,000 you received as proceeds of a life insurance policy will depend to some degree upon your other investments. Since you are not in a ixisition to take a risk we would suggest that at least part of your funds should be placed in Dominion of Canada bonds or Dominion guaranteed bonds. The return to be secured from Province of Saskatchewan bonds is high, but the Dominion of Canada bonds are more marketable.

Saskatchewan has made good progress during the past fiscal year in balancing its budget, but has secured substantial loans i from the Dominion and from the banks which do not strengthen its financial position. The fact that the bonds are selling to yield well over six per cent indicates that investors as a whole do not rate these bonds as a first-class risk at the present time. ; Doubtless the position of the province will be considerably strengthened in the next few years and investment in the bonds at ! this time will in such case prove satisfactory, j but such improvement cannot be prophesied j j at this time.

Subscribers to Machan' a Magazine desiring advice in regard to Canadian industrial investments, or life insurance problems, will be answered freely. Enquiries should be addr ssed to the Financial Editor of Maclean’s Magazine and a stamped, addressed envelope enclosed. 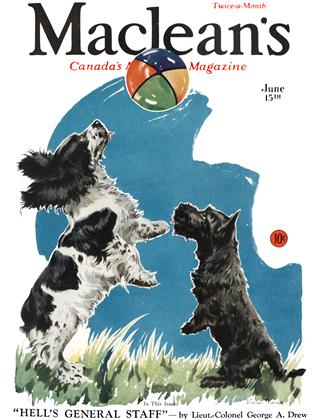