THE CONDUCT of Japan in Manchuria is justified, according to W. Kirkpatrick, a British Member of Parliament, and in The English Review he tells why.

“The truth is that while China is divided into a variety of different races and languages, and is not even nominally a federation of states, Japan is a unified, well-organized, united kingdom. I have, indeed, heard Japanese friends express pride and pleasure that Japan is comparable with England.

“I am more than ever convinced now that the only possible chance of peace coming to Manchuria is with Japanese guidance, surveillance, and even temporary suzerainty.

“I join issue with the League’s finding that ‘the sovereignty over Manchuria belongs to China.’

“On the fall of the Manchu dynasty in Peking. Manchuria came under the sway of Chang-tso-lin and his son and successor Chang-hseuk-liang, neither of whom acknowledged the suzerainty of any Chinese authority. The Lytton Report explains that Chang the younger ‘seems to have looked upon his relations with the Chinese Government ... in the sense of a personal alliance.’ The ‘personal alliance’ encouraged the younger Chang to further despotism and to the oppression which had characterized the rule of his father.

“The Manchus, let it be recognized, are a very real people and are as distinct from the peoples in the Yangtse valley and Canton as are the peoples of South and Northern India. A deliberate and definite self-determined desire manifested itself in Manchuria for peace at home. This movement was initiated by leaders of the people in Manchuria itself and was encouraged by many prominent and exceptionally capable men in China, who retained an intense traditional loyalty to the Manchu dynasty, and hoped and worked for its restoration for the previous twenty years.

“It is impossible not to appreciate Japanese reluctance to accept the League’s dictum that the movement of Manchurian selfdetermination wras ‘conceived, organized and carried through’ by ‘a group of Japanese military and civil officials.’

“Japan is no less and no more justified in her approval of the displacing of adventurers w'ho had no title to rule—who ruled by the force of mercenaries and by extortion—than we were before and after all India came under the Crown, in approving and assisting the setting up of rulers in disorganized states in India. And history proves that we were justified.

"Japan is being misunderstood. To me. her motives are as simple and as clear as have been her asseverations at Geneva. She has a duty to herself, to her own tw'o million nationals in Manchuria, and especially to the twenty millions of Chinese refugees who have sought sanctuary in Manchukuo from chaos, communism and banditry.” 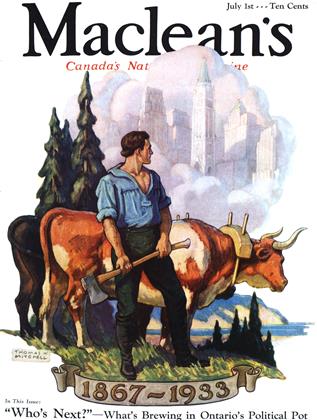