SUMMER is one of the best of all times to give a party; many parties. We are set for pleasant things. Summer and good times have come to be synonymous.

And good times require good things to eat and to drink. No matter what kind of a party or where the setting, the refreshments provide the accent.

Of course it is a very good accent, if the hostess knows the art of entertaining.

There are a few basic rules, and after that there exists any amount of scope for individuality.

The safe principle and the sane one for summer is to keep things simple. One food, if you like, and one drink. But both perfect.

Crackers and cheese? Certainly. But crackers that are the crispest and a cheese with that certain something; a subtle conserve or a tart jelly maybe or some crisp celery, if you like that motif. It is just as simple as that.

The beverage, too, may be the easiest to serve—but it must be just right. Cold, tall ; a drink to do its job of cooling, of refreshing, of complementing the food. A bottled beverage probably that you know is right. Pre-chill and serve with plenty of ice in biggish cubes or pieces so it won’t melt down and dilute the delicate flavors of your ginger ale or what-is-it. Sometimes you may wish to make up some nicely balanced mixture— but don’t do it unless you know you can make something as good in its way as your perfect bottled beverage. Experiment all you please, but not when you have important guests.

First aid to all summer hospitality lies in the ever-ready supplies for the filling of tall, thin glasses. Morning, afternoon or evening, the cold drink is in request. Sometimes it is enough in itself. At other times, you will want some dainty trifles to serve with it. Perhaps sandwiches or a big tray of zestful hors d’oeuvres; savory or sweet biscuits, cookies or cakesall the afternoon or late supper fixings. Or again it may be an’entire luncheon or dinner. You will want a cold beverage at all times, so be sure there is plenty “on tap.” A serene knowledge of this fact lays a good foundation for happy hostessing.

Tall bottles of ginger ale. carbonated water and a fruit juice or two have become staples in every smart household. They are the easiest things to serve, yet the most sophisti-

cated. A fine bottled beverage needs no dressing up, yet for variety it will enter into all sorts of successful combinations. Count them as a principal asset in hospitality.

SUCH BEVERAGES are easy for the summer party. And the refreshments should at least seem easy; effort must not be visible. The time to make sandwiches is earlier. Freshness is just a matter of making neat waxed-paper bundles and keeping them in the refrigerator. Canapé spreads and savory things for open-face sandwiches can be blended beforehand, but spread at the last minute if the base is a crisp one of toast or crackers, to prevent making it soggy. Better still, summer cottage or porch informality is well expressed when the guests choose and spread their own savory tidbitscrisp toast, assorted crackers and small dishes holding different piquant mixtures. and what you like in the way of relishes and accessories such as olives, pickled gherkins, pearl onions, salted nuts. Minced ham mixed with chili sauce or salad dressing; devilled tongue with a mustard dressing; minced chicken with green pepper, pimento and capers to give it character; different kinds of cheese; fish pastes and thin curls of smoked fish—these are just a few of the things people like when hearty outdoor life gives appetite.

Did you ever try a dub sandwich party on these roll-your-own lines?

Provide the same kind of fillings -sliced tomatoes, sliced cucumbers marinated beforehand, chopped hard-cooked egg, crisp lettuce or finely shredded green cabbage or lettuce marinated in dressing, brown and white bread. Have a toaster for those who want to use it. and plates and knives on the buffet table; then let each guest assemble his own double-decker. You’ll have a big bowl of dressing, of course, perhaps two kinds; and something in the way of pickles or olives for zest. With cold drinks at hand maybe a pot of hot coffee or chocolate, too. for a choice -the gesture of perfect hospitality will be to turn your guests loose, give them a free hand and a comfortable place to enjoy their own artistry.

For sandwiches made beforehand, the layer or ribbon type is always good because it can be built up in solid blocks, closely wrapped in waxed paper and kept in the refrigerator until serving time. R is just a case then of slicing down through the variegated layers; and if these are large, of cutting them into fingers crosswise to keep all the fillings represented. Cut the bread slices thin so that you can use a number of different fillings.

One good combination consists of finely minced chicken with dressing in one layer, ground nutmeats in' the next, followed by olives, crisped bacon, tart jelly and grated cheese between the successive bread slices. Put a weight on these layered sandwich blocks or wrap them very thickly SÍ) they’ll be pressed closely. E'or another good series of fillings, you might like minced tongue, a snappy relish, minced ham. and one or two layers of finely shredded vegetable moistened with dressing. Five, six or seven thin slices of bread with fillings between may be used -and the bread may be brown, whit&or the two alternated.

SOMETIMES you will want something hot and savory.

heat until the cheese is soft, add one-half cupful of dry ginger ale, then two eggs which have been slightly beaten. Stir until the mixture thickens, then serve without delay on fresh buttered toast or crisp crackers. Garnish with crisp slices of broiled or fried bacon.

Truly it is forethought that goes farthest in assuring a happy week-end. Have all the food possible prepared in advance, menus planned in detail, and arrangement made for those between-time snacks which are inevitable.

Provision for the cold supper or the picnic or whatever is apt tobe the order of the day’s secondary meal or even its main one. This includes such things as desserts of the molded sort or those ice-box cakes that demand twenty-four hours standing pastry shells all ready perhaps for easy final filling, loaf cakes and cookies which will keep a few days, salad dressings and other necessaries.

A beef tongue, simmered to tenderness, cooled in its soup and skinned later, is an admirable thought. Cold tongue is line alone or to combine with other meats or fowl.

Chickens, stewed as a forerunner of hot chicken pie, offer a good short cut. It’s just a matter of finally arranging the carved chicken in baking dishes, with good white sauce to cover and then a baking powder biscuit crust. (Insert a paper funnel or two through the crust, so the sauce can boil up in it, to settle back again later to do its duty within the pie.)

Then there’s the baked ham. A whole or half ham gives you a grand feeling of security against keen appetites.

Simmer the ham in water to cover until it is tender. Cool in its liquor, then remove the skin, crosscut the fat, stick the intersections with whole cloves, and spread the surface with a good coating of sifted crumbs and brown sugar. Sprinkle with ginger ale. Bake in a moderate oven, pouring ginger ale into the pan and using it for basting after the top has crusted. About an hour is usually required.

A ham done this way is a luscious thing, hot or cold.

serve at once. If the ingredients are not thoroughly chilled before adding the ginger ale, less water should be used so that the amount of ice necessary to chill the mixture will not dilute it too much. This amount will serve twenty-five to thirty people.

Combine the fruit juices, sugar and cherries which have been cut in pieces and let stand in the refrigerator until just before serving. Add ice and the charged water and serve immediately. This amount will serve about thirty people.

Crush the mint leaves in the lemon juice, add sugar syrup and ice cubes and till up the glass with chilled ginger ale. Deliciously refreshing.

Combine the fruit juices, sugar and water, stir until the sugar is dissolved and chill. Add the ginger ale and serve in tall glasses over cracked ice. Six to eight servings.

Combine the chocolate syrup and the cream in a tall glass and add the crushed ice. Fill the glass with ginger ale and serve at once. 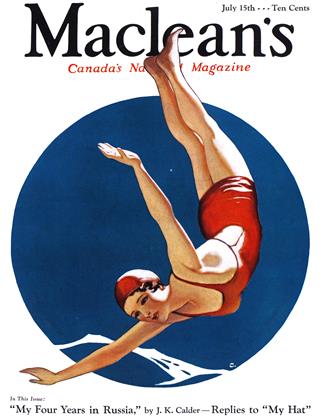