Hundred; of thou;and; of dollar; are tost annually in Canada through careless Investment. Fraudulent and worthless securities are being constantly poured on to the market to trap the unwary. A general observance ol this simple maxim will assist in the reduction and elimination of this economie waste—

FROM 1924 to the end of the boom period over half a billion dollars worth of pulp and paper securities were sold to the public. Accustomed as we are to think in big figures, such a sum may not at first appear impressive. It does assume importance, however, with a realization that it is the equivalent of $500 for every man, woman and child in the Dominion.

Some of this money, so readily put up by investors in Canada, the United States, England and elsewhere, took care of maturing obligations. The greater part, however, was expended on the development of the newsprint industry in Canada.

By the end of 1926 the Canadian newsprint industry was on a parity with that of the United States. Three years later it was twice as large. Needless to say the industry did not expand so rapidly without growing pains. These growing pains t<x)k the form of overexpansion, and came close to wrecking one of the Dominion’s major industries.

Efforts were made by the industry’s executives, bankers and others to stave of! demoralization. The lack of any controlling influence, however, was seen in price cutting, secret rebates and other obnoxious practices.

The net result of the so-called Golden Age of the Canadian newsprint industry between 1921 and 1929 was to place the majority of the ojjerators in bankruptcy. With the exception of two companies, no returns have been made on capital for more than two years. Mill oixrations have shrunk to less than fifty per cent of capacity. Few operators have adequate working capital; all have financial problems.

The breakdown of the industry was premia! by a severe deflation in pulp and j>aper security values. The decline was rapid, and few of the many thousands of holders of this type of security were fortunate enough to sell lx*fore the collapse. Consequently a vast army of investors in Canada, the United States. England and elsewhere continue to hold these securities. They art* regarded as having little value, but are held with the hojx that by «ome lucky chance they will again come into their own.

Brosfxcts of an upturn in the newsprint situation were remote at the beginning of 1933. There was no evidence of any serious attempt at co-operation. The market was demoralized. Brice cutting was indulged in at every opportunity and the "official” schedule of rates was seldom observed.

SUCH WAS the state of affairs when at mid-year the U. S. A. Industrial Recovery Bill was passed in the closing days of the last Congress. This act. while primarily designed to help American industry, is of the greatest importance to Canadian manufacturers. Especially is this the case with the newsprint oixrators, who market roughly eighty per cent of their output in the United States.

In the last three years we have supplied American publishers with fifty-four JXT cent of their total newsprint requirements. The balance was made up of domestic manufacture and a small volume of imports from the Scandinavian countries, the latter amounting to about 150,000 tons annually.

The degree of prosperity in the Canadian industry, therefore, may be said to be de-

pendent on the demand for newsprint from the American publishers. The Canadian, English, Australian. New Zealand and other markets are relatively unimportant. They would not keep the mills operating at capacity for more than two months attheoutside.

Bearing in mind that the American market is the largest outlet for Canadian newsprint, the Industrial Recovery Bill looms up as an extremely important bit of legislation. It may become the Emancipation Act for the Canadian Industry. Under the terms of this bill, the American producer can set up a code or agreement of fair competition.

An organization known as the Association of Newsprint Manufacturers in the United States has been created for the purpose of taking advantage of the terms of this Act. At the time of writing, no details are available as to the code. Preliminary information is that no quota will lx* established on the volume of newsprint imports; a minimum price for newsprint will lx* set; the code will incorporate a series of business ethics. It will eliminate price cutting as far as the domestic manufacturer is concerned, and will not permit the importation of newsprint on such terms as to nullify the value of the code. In other words, foreign manufacturers will have to adhere to the code laid down by the American manufacturers just as long as they desire to market their product in the United States.

It is presumed that no code will be approved by the Federal Government which contravenes the principles of fair competition. i.e., the American producer will not be allowed to shut out imfx>rts to the detriment of the consumer. This is a phase of the situation which will be closely watched by the American publishers.

The greatest fear is that the Canadian manufacturers will not live up to any code, whether of domestic or foreign origin. The experiences of the past few years have made it apparent that the only way in which a common |x>licy can be enforced is by threat of punishment and having the power to enforce such threat.

CANADIAN newsprint producers cannot take any initative to meet the situation created by the Industrial Recovery Bill until they know particulars of the United States code. Discussions among the Canadian manufacturers have been along lines that an association similar to that in the States might be formed, together with the adoption of a similar code provided it can be effectively enforced.

In order that the Canadian manufac-

turers will live up to the United States code, a proposal is under serious consideration to license companies doing business with the United States. The conditions under which newsprint could be exported to the States would be in line with those laid down in the code.

Such licensing would be in the hands of the Federal Government, which has jurisdiction over international trading. It is believed that this would prove effective in maintaining a policy designed in the best interests of the industry as a whole. The loss of an export license would be a penalty which no company could afford to risk and, for that reason, they would be a party to regulations put in force by the Dominion.

Irrespective of whether or not the manufacturers in this country form their own association or are licensed to do business with the United States, the newsprint industry in the United States and Canada is at the |X)int where marketing arrangements can be stabilized, price cutting and other trade evils of the past three years abolished.

To those who have followed the fortunes of the industry, such a development marks the first step on the road to complete recovery. It does not mean, however, that the manufacturers are going to lx* able to recover their lost earning power overnight. That depends UJXMI an increase in the volume of consumption.

A code will permit business to be conducted on an efficient basis. In time consumption will increase. Caerating ratios will advance, and the manutacturers will again be in a position to take care of their capital obligations.

It is difficult to say how long it will be before the manufacturers are earning a return commensurate with their true capital investment. That is not a major import beside the fact that the industry is on its way back.

The many thousands of Canadian investors holding pulp and paper securities have waited patiently. Another three years may pass before the industry is out of the woods. Meanwhile it will be a period of rebuilding, and those investors who have shown their faith in the industry by retaining its securities are likely to see their holdings increase in value as the recovery gains increasing momentum. 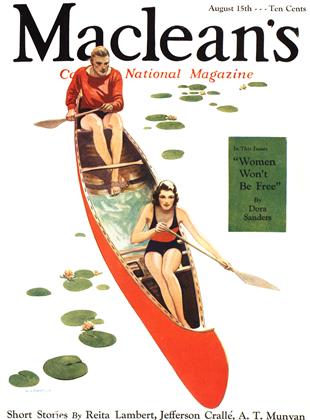