A Department for Young Canadians

Dig In—It’s Up to Us

WELL, WHAT about it? We know all the sad stories— disillusioned youth, lingering engagements, wailing families, shattered hopes weeping Annies and sorrowful Sams . . . millions of tried and true workers must be absorbed again by industry before youth gets a chance . . . the Era of Opportunity is gone . . . years will be needed for readjustment ... we waste away day by day.

Come on, we’re reeking with self-pity. For Pete’s sake, let’s stop whining. After all, there are plenty of us yet who don’t know how to be trimmed.

When a human being is perplexed, worry sets in. That’s the way with countless thousands of us. The key to snapping out of it is action—doing something—it doesn’t much matter what, so long as we go at it for all we’re worth. Take this case of an old Canadian backwoods woman whose daughter and her seven children lost their breadwinner, crushed one day under a falling log. The old soul did what she could —then plied her skilled fingers in every spare minute at the most intricate mat she ever hooked. Spring came, it was finished, and she looked up with a steady grip on life again—saved, she avowed, from going crazy.

What’s next? Let’s get at it! Smash up or dig in—there’s our choice.

Smashing up will do no good. It’s not British, and not Canadian, for the three or four little uprisings of our history have fizzed with us staid Canucks. The cumbersome social machine is out of control, but that’s no reason why we should lose control of ourselves. Statesmen of genius are at their wits’ ends, but it’s no use our going off at half-cock. Débris won’t butter any parsnips.

ECONOMIC IMPROVEMENT and sane social betterment will come slowly. Let’s work for it and keep cool under the collar. Canada is, after all, but one of the nations caught in this cruel backwash of time. All we can do is to face the facts, fight, keep our chins up.

What then? Dig in! What, you’ve got no guts left? Kick some life into yourself and listen:

Think of Laurier, the silver-tongued soul of Canada, knocked out of his legal career at an early age by tuberculosis.

Think of a fellow called Franklin D. Roosevelt. Ten years ago he lay smitten with paralysis.

Think of Ramsay MacDonald, threatened with blindness, warned that the strain of office was shortening his life—but carrying on as Britain’s Prime Minister.

Was it easier for them than for you? There is a truckman near here who gets ready his load of farm produce in the afternoon and evening, starts out with it at three o’clock the next morning on a hundred-mile drive to the city, peddles it from the opening of store doors to their closing— often without a meal—and drives home in the evening. He does it twice a week. In his spare time he farms.

When you and I are ready to give ourselves willingly to the little and big jobs we see to do, we can be our own bosses, and, what’s more, succeed.

T"\IG IN, dig in. At what? Earn your -U' bread on a farm, help out relief workers, pick up odd jobs, try a relief camp, join in sports for unemployed, read, debate— anything, anything to keep you busy. Thinking about your woes won’t stiffen your

morale. “Act, act in the living present.” Learn to hunger for the little things you can do, and the day is won.

Think we should flock to the wailing walls? The march of history is inexorable, and we are called upon to do our part. The youth of this decade is put to the proof. Shall our courage fail?

Learn the lesson of the trials of men in the Great War. There are returned men begging in Canada today, but where is the community where one-time war wrecks are not now the leaders of that community? Today is the testing time.

I AM PERFECTLY aware that being a girl out of work has its advantages; there are no girls in the bread line. We can busy ourselves in the house. But what girl with a business training wants to sew or cook unless it be in her own home— building for the future? We are trained for business. We like it. We need the money, most of all in our youth. We are missing what our elders have had. My ambition was to save enough money to travel, after paying for a nice fat insurance for the future. I wanted to go through the Rockies—a dream which made work a pleasure. Today the height of my ambition is to keep off the rocks.

What to me is the saddest part of the whole business is the hopeless outlook of our older people. They are going through the mill themselves and can’t spare a word of encouragement for us. A few years ago we blithely ignored our elders unless we were in trouble. Then we would ask and get help from them. Now, in the face of this trouble, they are as helpless as we ourselves.

Last year, a man of my acquaintance— a clever man, head of a big business, and a man for whom I had a tremendous respect—committed suicide. A few months later another man whose courage and strength of character I would never question also committed suicide. For weeks afterward I was haunted with the thought: “If men like that can’t face this thing, who am I to keep on going?”

T70RTUNATELY—because of my youth, ■*I suppose—I snapped out of it. But the helpless feeling persists. We look for help to our older people and we draw a blank. Those of our contemporaries who are working do not know just how long it will last; we who are unemployed do not know what is ahead. We can only live for today. Tomorrow and tomorrow’s plans we are obliged to ignore. Our sense of values is slipping. We read about a youth committing a robbery and getting caught. We feel sorry for the poor devil —we think it tough he got caught—probably needed the money as badly as we do ! We condone today what we condemned yesterday.

Respect for our leaders is dying—will die completely unless a sincere effort is made in the not too distant future to restore our faith in the future of our country, which is our future too. We need action. I and thousands of young people like me need work to keep our feet on the ground.

If a leader should rise up now and pipe a tune we like—we will follow. Will it be a tune our older people approve, or will it result in a complete revolt against old traditions—traditions which seem to have failed not only the older people but youth as well? 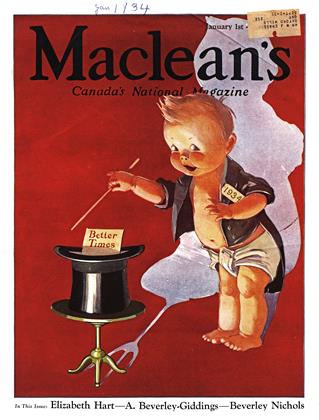