MR. GRAHAM F. TOWERS is a tall, shrewd young man from Montreal who is never surprised by anything.

He was not surprised, to any visible degree, even when he found himself selected to be Governor of the new Central Bank of Canada, his composure perhaps being due to acquaintance with the relative qualifications of the other rumored possibles.

He thinks he will like Ottawa quite well except for the poor train service to Montreal.

He never counts chickens before they are hatched and remains very sceptical about them afterward.

He wears a highly varnished protection of complete imperturbability.

He has a disconcerting practice of gazing at one with eyes which do not blink through rimless glasses which never need polishing.

At such moments of appraisal he displays all the warmth

of human emotion which might be associated with an electric adding machine operating in sub-zero temperature.

If he did not wear glasses and were less tall he would look a little like the Prince of Wales, although he has never ridden to hounds in his life.

He has a talent for agreeable conversation which has deluded many hopeful gentlemen into believing that they were making excellent progress until they reached the point of mentioning what they were after.

At this point he suddenly develops all the loquacity of an oyster with sleeping sickness.

He is never untidy, never hurried and never enthusiastic.

His nearest approach to outward enthusiasm has probably been upon returning from skiing to a comfortably warm room supplied with those amenities which a gentleman likes to expect when roughing it in the mountains.

He looks like a much better bridge player than he really is.

His sense of humor takes the form of a delicate and appreciative irony which misses no opportunity for exercise.

He was bom in Montreal, went to Montreal High School and thus had no contact with real culture until he was sent to Toronto to attend St. Andrew’s College.

He so keenly appreciated the difference between the two cities that immediately upon finishing St. Andrew’s in 1913 he registered at McGill.

He did not finish McGill until 1919 due to a military interlude of three years during which he fitted himself for banking by becoming intimately familiar with the habits and behavior of the Army Service Corps mule.

He graduated from McGill in political economy, intended to become a lawyer, and went to The Royal Bank of Canada in 1920, more or less by accident when a friend of his turned down the newfangled job of economist and passed it along to him.

This job took him to London, Paris, Barcelona and other

centres of interest, but was not as entertaining as it sounded since it required him to spend dizzy night hours counting securities in musty vaults while his travelling companions occupied themselves in near-by places of amusement.

It was too late then for him to become a lawyer so he stuck it out and in 1929 was moved back to Montreal as Chief Inspector of the bank, a title whose exact meaning he was never able to ascertain.

The promotion was, however, quite satisfactory as it brought him into the rarefied atmosphere of the inner group on the Second Floor at Head Office, a happy little family always ready to help anyone in trouble as long as the collateral is sound.

.Two years later he was made assistant to the General Manager which left him still in some uncertainty as to his duties but with no doubt about his working hours.

Last year he became Assistant General Manager and the bank was getting into the embarrassing position of having no more promotions to offer him when Mr. Bennett relieved the situation in September.

His appointment as Governor of the Central Bank of Canada is for seven years, this being a relief to his friends who have been getting fed up with being obliged to congratulate his promotions every few months.

He is now being described as an economist again but will probably manage to disprove this before it goes too far.

He likes plenty of sleep and has sometimes wished that bankers did not have to appear to be so efficient.

He has a clear, clipped manner of speaking which makes him interesting even when he talks atxjut nothing, which a banker often does.

He has for several years belonged to an intellectual organization in Montreal known as the Twenty Club, a group of supposedly bright young men who gather at dinner to seek improvement by self-inflicted oratory mainly on current topics.

He smokes cigarettes and would look silly with a pipe.

He exhibits a sharp temper when it seems wise to do so but usually contradicts people with a meticulous courtesy which permits no quarrel.

Nobody who knows him has doubt as to the painless ease with which he will extract the incisors of any carnivorous gentlemen at Ottawa.

He remembers everything he hears and believes very little of it.

He was thirty-seven at the end of September and looks even younger, though probably not for long now.

At school he was much better at languages than at mathematics but quickly learned that arithmetic does not matter much in banking as long as one is careful always to make his mistakes on the right side. 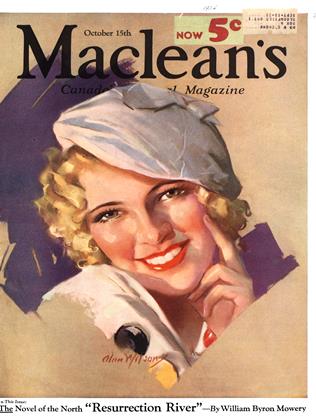