Belle of the Nineties

BELLE OF the Nineties” brings back to us once more the Problem Girl of the movies, Miss Mae West. What Miss West’s latest picture was like before the wrecking crew went to work on it nobody

could possibly tell from the published version, which is a little like a jig-saw puzzle after someone has tipped over the table. From stray bits which were more or less adjacent, I gathered that Miss West was a New Orleans entertainer in love with a prize-fighter, the Tiger Kid (Roger Pryor), and that Ace Lamont (John Miljan) was in love with Miss West. Presently the Tiger Kid stole Miss West’s diamonds and Miss West retorted by putting a sleeping powder in his drinking water during the final round. After this, Ace Lamont tried to kill Miss Katharine de Mille, nobody quite knew why, and the Tiger Kid did kill Ace Lamont. Whereupon Miss West burned down the hotel where they were all stopping and immediately afterward was married to the Tiger Kid by a real clergyman.

None of it made very good sense, but Mae West’s pictures ■arely do. In fact, apart from the clergyman touch, it was

pretty much Mae West as we have always had her. It all seems to point to the fact that reformers should think twice before taking Miss West for a ride; they are likely to come back from the ride with the reformers inside and the smile on the face of Miss West.

MILLION DOLLAR RANSOM” is a Damon Runyon story about a desperate young man (Phillip Holmes) who gets himself kidnapped in order to give his mother something to think about besides her foreign suitor. It works at once, the mother dropping the suitor and sending out frenzied appeals through the newspapers for the return of her brown and white Pekingese, which is a veiled description of Mr. Holmes. This brings some real gangsters into action, and this time Mr. Holmes really is kidnapped and no mistake about it. It’s fairly exciting, but not one of Damon Runyon’s best. Edward Arnold as a reformed gangster chief is good, as usual.

The Count of Monte Cristo

Y\ HATCHING “The Count of Monte Cristo,” I found it VV difficult to believe that it hadn’t been written for the screen in the first place. For the Dumas novel has everything that makes a good movie—pace, variety, suspense, timing—even one of those impassioned courtroom climaxes which make it seem as though the jury system, too, had been invented with the movies in mind.

The story, which you probably know, is about a young French sailor condemned without trial to life imprisonment by political intriguers; and how he escaped, discovers a treasure, and comes back to bring his enemies to justice.

Robert Donat, as Edward Dantes, the hero, gives the dramatic, highly stylized performance that the narrative demands. The picture runs well into two hours, which is a little too long even for a good movie. Still, I have often sat through much shorter movies which seemed to take up considerably more time than “The Count of Monte Cristo.”

You Belong to Me

LEE TRACY is the hero of “You Belong To Me,” but he • doesn’t get half the space in the picture that Little David Holt does. On the other hand, David is called on during the story to do a great deal of suffering. First, he loses his father, then he gets a stepfather of the worst type, and then is sent to a military academy where nobody understands him. His mother (Helen Mack) is very beautiful and kind, but before long she falls out of a stage swing, so he loses her, too.

I wasn’t able to feel quite so sorry for Master Holt as his sufferings demanded, because he seemed such a competent child and just a little uncanny. I did, however, feel a little sorry for Lee Tracy, who wandered about disconsolately wearing a long putty nose and picking up such small crumbs of attention as the audience could spare from David.

IT IS POSSIBLE to feel sympathetic with practically everyone in “Hideout,” which is a picture of great brightness and charm. It is about a young racketeer (Robert Montgomery) who decides to go to the country till certain things blow over. And there he falls in love with a farmer’s daughter and resolves to mend his ways. Maureen O’Sullivan is the daughter, tripping about feeding turkeys, milking cows and even helping with the hay, in crisp little daytime frocks and costly slippers.

It sounds rather silly, but actually it is as well-written, brightly directed and pleasantly acted a picture as you are likely to meet. Robert Montgomery is at his best in one of those blithely youthful parts that make indulgent maternal feeling swell up all over the audience. If you look about you at this picture you will surprise the mother look on some of the most unlikely faces. But you probably won’t want to look about; it isn’t that sort of picture.

She Loves Me Not

SHE LOVES ME NOT” is amusing, too, being the story of a night-club entertainer (Miriam Hopkins) who drops into a men’s university dormitory like a rock into a pond, sending out circles of excitement in all directions; so that the underworld, the press, the moving-picture industry and even the Government at Washington are all finally engulfed.

Bing Crosby is the hero. He had apparently been sent to Princeton to study the higher branches of crooning; which meant in this case that whenever the action got going briskly, everything had to be held up while Mr. Crosby did his homework—songs, improvisations, and repeat choruses. “She Loves Me Not” would have been a good deal better without Bing Crosby, or at any rate with a more moderate amount of him. But it has some bright moments, thanks to Miriam Hopkins, George Barbier and some other talented people.

Chu Chin Chow—The best of the light operas done in the best British-Gaumont style. With Fritz Kortner very fine as the bandit chief. A family film.

Treasure Island—Robert Louis Stevenson’s story pictured very much as he wrote it, thanks to Wallace Beery, Lionel Barrymore, Jackie Cooper and some others. A story for boys that men and women and even old ladies will enjoy.

One Night of Love—Love and comedy, with grand operatic climaxes. With Grace Moore, Metropolitan soprano superb in the leading rôle. Highly recommended.

Judge Priest—Will Rogers as the popular Irvin Cobb character. Or more strictly, Judge Priest as Will Rogers. The best Rogers picture for some time. A family film.

Crime Without Passion—Murder from a slightly different angle. With Claude Rains. A handsome and dramatic, if slightly unpleasant, picture. Not for children.

Cleopatra—The life of Egypt’s Queen, with some added data by Cecil de Mille, and with Claudette Colbert as a rather candybox Cleopatra. Mostly spectacle.

The Last Gentleman—George Arliss very happy in one of his crotchety-old-gentleman rôles. A slight but amusing family picture.

Dames—Another of the Warner Brothers’ show pictures about the show business. With an elaborately photographed chorus and occasional moments of plot. Ruby Keeler, Dick Powell.

The Scarlet Empress—Cossacks gallop furiously through this picture and Miss Marlene Dietrich is photographed in as many ways and from almost as many angles as a Warner Brothers chorus ensemble. Not much story and less history.

Madame Du Barry—There is a good deal of history in this picture and there are moments of beauty, mostly photographic. But Dolores del Rio is rather irritatingly coy in the leading rôle. Adults.

The Cat’s Paw—Harold Lloyd performs with a sedateness which may baffle some of his old admirers. But the story is lively. A family picture.

The World Moves On—It moves pretty creakingly in this picture, which is largely pieced together from a number of much better films. With Madeleine Carroll and Franchot Tone.

The Affairs of Cellini—From the stage play, “The Firebrand,” with Fredric March, certainly no firebrand, in the leading rôle. Frank Morgan as the Duke of Florence takes the picture away from Mr. March and Constance Bennett without much opposition from either. Adults. 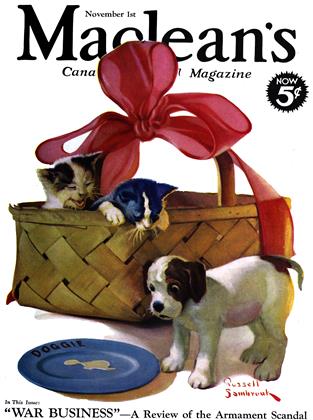