One of the advantages of reaching old age is being able to check up the facts in articles written about old-time events.

Regarding “An Inside History of Canada,” October 1 installment, in which the difficulty of raising money to complete the C. P. R. is mentioned; it will be remembered by those of us on or near the work that Donald Smith, George Stephen, and J. J. Hill of the Northern Pacific Railway came to the rescue of the Canadian Government and the C. P. R. in the last years of construction and raised the money.

The article concludes with the statement that the first C. P. R. train for the West Coast left Montreal on June 13, 1886. The correct date was June 29, 1886. Tire writer was a passenger on that train from Ottawa to Calgary and from Calgary to the Coast, arriving there on July 4, 1886. He was engaged in completing the organization of the Railway Mail Service. There were no members of the Government on board, as stated.

A grand experience was also the record of being the first Easterner to reach the Coast by the first through train. Unfortunately, that first train, which turned around and left Port Moody on July 5, was consumed by fire, excepting the sleeping car, at Beavermouth on the Columbia River at the eastern end of Rogers’s Pass. The writer will never forget the bush fires in the Pass during the week following the destruction of the first train going east. Fortunately, no lives were lost.

A few days before the first train arrived at Port Moody, the site of what was to become the permanent terminus twelve miles farther on was completely destroyed by fire including the small town of Vancouver. In 1888 I saw the start of the great City of Vancouver, then chiefly rough wooden buildings.—W. E. Bennett, Ottawa.

I have been a continuous reader since 1914, when I obtained material for my “orals” at school from your “Review of Reviews.” In twenty years there has not been a single copy that has not had courageous, timely articles by capable writers, and fascinating fiction. I say this in all sincerity and because I look on your publication as an old friend. And congratulations on your new price. It’s the best five cents worth I know. — (Mrs.) J. G. Watson, Chatham, Ont.

I read Dr. Atlee's article, “Should Women Be Men?” and Constance Sisson’s reply. I ’m delighted with the reply. I notice she mentions that in any movie house half the spectators are men, and in any variety show three-quarters are men. This reminds me that our penitentiaries are practically filled by men. How does the boasted superiority of men account for this?

No doubt v'omen will eventually attain to the highest good allotted to them by the Creator. It is an evolutionary process, and when the world emerges from its present darkness, as it surely will, woman’s ego will he satisfied with her position therein.— M. A. Oakes, New Albany, N.S.

Letters such as that of Miss Jollop, of Brandon, can do no one any good, and may do considerable harm to those with weak and immature minds. Like many others, when engaged in discussions of moral questions, Miss Jollop confuses liberty with license and also fails to recognize any duty to the children growing up.

Is it not our duty to see that pictures featuring dishonesty and immorality are thrown out of our theatres for the children’s sake if not for the sake of others?

For anyone to claim that we have no right to do so is sheer imbecility. To brand as hypocrites those who are trying to make the movies a cleaner and more wholesome place for all of us, shows ignorance, absolute and colossal. Miss Jollop is claiming the right to have what she wants irrespective of its effect on anyone else.—R. II. Goodchild, Calgary.

May I congratulate you on the decision to reduce the price of Maclean's Magazine from ten cents to five cents, and at the same time express the hope that this policy will quadruple the circulation and bring the magazine into the homes of some of the thinking people.

I have found both entertainment and instruction in the columns of the magazine, and many of the articles 1 have taken out and preserved because of their reference value. In your last number there is a splendid article dealing with Canadian business, setting out in the clearest and simplest terms the distribution of labor in the various industries and the progress that has been made and is being made throughout the Dominion. I would not know where to turn to get the information that is contained in this excellent article and I am grateful to the author.—H. S. D., Toronto.

Price Down, Quality Up

When the price goes down on an article, the quality too often follows suit, but not so with Maclean’s. It seems to me to be more interesting than ever. — L. W., Toronto.

In your October 15 number, Mr. John Holden shows (he thinks) that the public wants the Mae West kind of motion picture.

The exceedingly clever British picture, “Be Mine Tonight,” a very clean picture but witty and with fine photography and glorious singing, ran for seven months in Melbourne, nine weeks in Hollywood itself, and has played more return engagements to crowded houses than probably any other film. I am willing to wager a bit that it would draw a greater return crowd than any Mae West picture.

Now for another article in your same number, the one dealing with the lighting one should have for varying purposes. It is, or jxrhaps it is not, well known that the English use lights for all purposes of far lower average candle (xjwer than the Americans.

Any time you have the opportunity, observe a group of army or navy officers of either country. You will notice that the British army officer, brought up to read and study in the glimmer of restful low candlepower lamps, does not wear glasses. But observe the American officers, fifty per cent of whom have to use an aid to seeing. They have been brought up where glaring highpowered lights are used and they suffer from a disability at an early age.—R. G. S. Anthony, Trail, B.C.

A Question of Dates

The “Inside History of Canada,” contributed as semi-humorous, is intended to record dates and incidents as facts, yet contains the statement that the late Hon. Sir John A. Macdonald in 1896 won the election with a certain famous slogan and died several months later.

As a matter of historical fact, Sir John died in June, 1891, and the election in 1896 brought about the defeat of the Conservative Party by the Liberal Party under the leadership of the late Right Hon. Sir Wilfrid Laurier, after the Conservative Party had four different and successive premiers since the passing of the old chief in 1891.—R. L, Shelburne, N.S.

Women Don’t Want to be Men

As 1 wash from my husband's shirt the sweat stains embedded there from pitching sheaves for long hours in a hot sun. I wonder if I would like to be a man and do man’s work instead of my own. My strength would not lx equal to tossing sheaves lor ten hours at a stretch, although there are women among us who are doing it. but I feel confident that I could hold down a bench in an office while I handled other people's money, or tabulated laws that are neither heeded nor enforced. I even imagine I could frame a law that would have more fair play about it than many of the laws that go on our statute books.

I also wonder why 1, who have to pay taxes on property that will not sell for what it cost nor bear its own overhead, should not be provided with a power washer, and my husband with new machinery, by those who take our taxes and use them to support in idleness men who could make these articles for us. I am righteously indignant when I hear of men eating the bread of idleness while there are women doing their work.

As I look over uncultivated fields and at large barns and roomy houses which are tottery because men would rather be fed and bedded down in masses like animals than bend their backs with honest toil, I wonder how long it will be before we hear the cry, "There is no wheat in Canada.” For an agricultural country can no more be run without homes than an automobile can lx run without its engine. But man has taxed his ingenuity to give himself a life of ease, until our cities are harboring more men than they C3n use, while the silent places where God meant man to sojourn ore deserted.

This probably will lx the trend when woman can show her superiority over man and reconstruct a sphere where men can be men and women can be women. Then beer parlors will lx replaced by bread parlors, and the needy will be administered to without a relief racket that is costing millions of dollars while the needy are neglected Then people will be allowed to save ana retain their dollars for constructive purjx>ses, instead of having them taken away and thrown into a hole down which billions of dollars have already disappeared.

Do not get the idea that woman would prefer a job of this magnitude to the one for which she was created. One has only to watch a group ol smali girls at play to know they came into the world to be mothers and home-makers. It is the men who shirk the responsibility of providing the homes and families. It was man who let down the barriers for women to come into his kingdom. Men have always liked to laze and be waited upon, preferably behind closed doors. They do not like women competing with them and carrying off the honors, for women have shown they have the qualities which men never could cultivate. Their patienoe carried them into schools, their courtesy into offices, and their sympathy into sick rooms and hospitals—and, mark you, they were given these positions over the heads of male applicants by boards of intelligent men. —(Mrs.) Ed. Watson, Shelburne, Ont.

I realize, being an ex-Canadian, tnat Maclean’s Magazine presents, as does no other Canadian periodical, the newsworthy events of Canadian life as well as good stories and articles of a general nature.— C. H. Samson, Palm Springs, Calif. 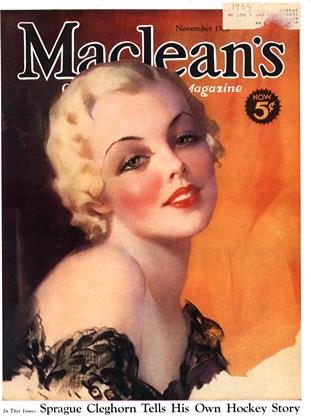