MR. GEORGE WILLIAM ALLAN, K.C., lives in Winnipeg, and is one reason why people admit that men are men out there.

He regards it as an exaggeration to describe him as the Grand Old Man of the West, because he did not settle in Winnipeg until several years after the Red River Rebellion and will not be seventy-five until next August.

He is chairman of the Canadian Committee of the Hudson's Bay Company—a prehistoric institution which used to have a little difficulty in determining whether it was an Arctic expedition, an outpost of empire, a club for gentlemen or actually a commercial enterprise.

He is also president of Great-West Life Assurance Co., and a director of the Canadian Bank of Commerce, Canada Cement, National Trust, British-American Oil, and numerous other concerns which take him East often enough to make him glad he doesn’t have to live there.

He is big, burly, bald and blunt, and vigorously objects to photographers on the ground that they invariably make him look like a great w'hite bull.

He has a deep, rumbling voice which matches his somewhat intimidating exterior, but is never able to conceal his courtesy and kindness.

Allandale, Ontario, was named after his grandfather and the Allan Gardens in Toronto after his father, a Senator and distinguished lawyer of that city. He himself was born in Moss Park, Toronto, but has always felt that this was not his fault.

He went to Upper Canada College for a while, relieved the situation by transferring to Galt Collegiate, and conferred a favor there by transferring again to Trinity College School at Port Hope.

He managed to finish Trinity College School and, under this momentum, proceeded to Trinity College University, studied law with the old Blake firm in Toronto, and became a bachelor of arts in 1880, when he was twenty years old.

He thereupon departed for the West, to employ these scholastic attainments by getting into the lumber business in Brandon when it was still in the tent-town stage.

He landed in Winnipeg two years later, found that lawyers were scarcer than lumber merchants, and forthwith formed a legal firm which has now been in existence there for fifty-two years.

He prospered quickly, thanks partly to the fact that he had attended so many different schools in Ontario and thus had a wide circle of fellow alumni who knew' no other lawyer in the West.

His early years as a legal luminary were spent chiefly travelling the prairies with tent and buckboard examining real estate possibilities for acquisitive gentlemen in the East, and he thus participated in the beginnings of nearly every Western city.

His activities at this time supply whatever factual basis there may be for the countless gargantuan legends w'hich have made him the best smoking-room companion in the highly competitive Western field.

He is probably the only man in Canada who can tell stories better than his fellow' citizen, Mr. E. H. Macklin, and nearly as well as the late Colonel George Ham.

To this talent he adds a judgment in the selection of good food which makes him a dinner host beyond any visible competition. To him belongs chief credit for the delicate transitional operations by which the Hudson’s Bay Company has gradually become a truly Canadian institution, with the Canadian Committee something more than a decorative appendage.

His busiest time of the year occurs when the Governor of Hudson’s Bay arrives from London for the annual visit —a period of social and other complexities horrible to contemplate.

Pressure of business duties prevented him from accompanying the Governor upon the voyage to the Company’s Eskimo subjects last summer, and it is now perhaps doubtful whether he will become even a Senator.

He is a prolific writer of letters to innumerable friends, most of whom, by tacit agreement, do not trouble him by replying unless necessary.

He is conservative in politics but liberal in philosophy, a combination which haá enabled him to emerge undamaged even from his sojourns at the Union Club in Victoria.

He usually spends the early spring weeks of each year at the Union Club, and employs himself there with golf, bridge, cigars and correspondence dealing impolitely with the weather and other current topics.

He also belongs to the York Club in Toronto and the Rideau in Ottawa, but does not seem to mind.

He ventured actively into politics in 1917, and spent the next four years at Ottawa as the Member for South Winnipeg. As a statesman he was highly useful to the Union Government, the usual procedure being that when something really difficult had to be managed he gave a dinner party.

He attends to his wardrobe by ordering a batch of clothes out from a London tailor every ten or fifteen years, and has the faculty of always looking well dressed although he never bothers to have anything pressed.

During the winter months in Winnipeg he wears a coonskin coat which is even frowsier than the specimen treasured in Montreal by Mr. Stephen Leacock, and regardless of temperature walks daily to his office.

For his office in Winnipeg he uses the Hudson’s Bay board room, where he sits on the site of old Fort Garry, surrounded by portraits of historic gentlemen and unequipped with any desecrating telephone.

This arrangement has naturally distressed various of the Great-West Life executives, who attempted not long ago to lure him into a really presidential suite, but nothing resulted except an explosion which sent the presidential glories back to storage.

He likes things to be well-worn and comfortable, especially his friends. 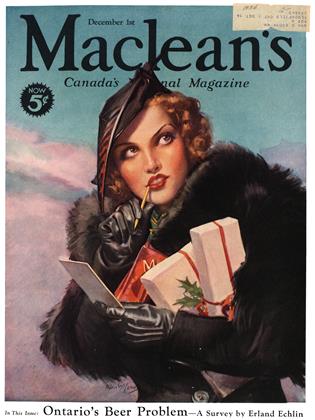