SHALL KNIGHTHOOD flower again? That, and not whether we should have a central bank or what should be done about taxes, promises to be the issue of this parliamentary session. And for good reasons. One is that it is easier to discuss titles than to discuss currency and credits. Another is that, whereas the public monetary knowledge is abstract and vague, titles are a human-interest, hear-ye topic exactly to its liking; a real corner-grocery, Pullman-car, bridge-table question involving people’s votes. Honorable gentlemen who, with an election around the corner, have that man-of-destiny gleam in their eyes, give that fact some thought.

Political Ottawa, for the moment, gives it first thought. In the Parliamentary restaurant, at the Chateau Laurier, in the Rideau Club and in Sparks Street lunch rooms, you meet the man who sees democracy in peril, or the man who sees just as clearly that what democracy needs is titles. Also you meet the statesman who, as he begins to harden his hands for the election by slapping everybody on the back, contemplates his having to vote for titles as a personal, perhaps national, misfortune. Great men, he knows, have been lost to the state for a lesser cause than that.

The perturbation of these statesmen explains a lack of cheers for what Mr. Bennett has done. It isn’t a question of considering titles good, bad or indifferent. What is challenged is the wisdom of disregarding that advice about letting sleeping dogs lie.

The absolute fitness of the two eminent Canadians on whom knighthoods were conferred recently is unanimously acknowledged. No one, and least of all Mr Mackenzie King, would argue that in these particular cases there was party reward, or money homage, or anything of snobbery. Chief Justice Duff was all his life a Liberal, is a poor man, a democrat to the hilt. Mr. Justice Tellier, although formerly a Conservative, has been long out of politics and is likewise without wealth. Finally, in the case of the civil servants and women awarded lesser honors, there is no question of money or of party. On that score, and in some other ways,

In truth, and providing inspired gossip be right, he might have done much worse. He

might—so Ottawa hears—have had a knighthood for himself or something higher; would have had it had he not urged otherwise. Also, by the same report, he might have yielded to pressure, perhaps to his own inclinations, and recommended a knighthood for a certain eminent Canadian exile domiciled not far from Trafalgar Square in London.

Mr. King, no doubt, is aware of all this. Also, and quite significant, Mr. King is not attacking the principle of titles. He assails Mr. Bennett for disregarding the 1919 resolution of the House of Commons; assails him for disregarding Parliament in 1934. Nowhere has he said that he is against titles, or that, in the event of his becoming Prime Minister again, he will discontinue titles; or that, what is more interesting, he himself wouldn’t take a title. His objections are upon grounds entirely constitutional.

Yet Parliament and the country, when they come to discuss titles, won’t stick to the constitution. The correctness of recommending titles after a lapse of fifteen years, and without any new expression of parliamentary opinion, will no doubt be discussed; but only incidentally. The real battleground will be the principle of titles; whether we should return to them. The conflict of 1918-19 will be fought over again. Fought over, perhaps, in the coming election.

A Source of Trouble

THUS TITLES—Canadian titles-run true to their history. From the beginning they have been a source of trouble; breeding jealousy within governments, conflict between Ottawa and London, political difficulties for parties. When, after Confederation, Lord Monck told Macdonald he had been made a K. C. B. and Cartier, Gall. Tilley, Tupper, Howland and McDougald, C. B.’s, there was a row immediately. Cartier and Galt believed they had done as much for Confederation as anybody and declined their honors, while Quebec felt that French-Canadians had been slighted. It was only after there had been a motion in Parliament and Cartier had been given a baronetcy and Galt a K. C. M. G. that the matter was smoothed over.

After that, titles for Canadians came through two channels—sometimes on the recommendation of the Prime Minister, more often through the Colonial Office in London. Alexander Mackenzie declined a knighthood for himself but compromised with his principles by recommending titles for his ministers; and in 1879 (this was after the Mackenzie defeat of 1878) we find Sir John Macdonald writing this curious letter to the Marquis of Lome, then Governor-General:

“I have no remarks to make as to the recommendations made by Mr. Mackenzie ... I beg to say that I hope the practice of conferring honors will not degenerate into a matter of course, and a number of honors be bestowed upon each change of ministers. In our new country many men enter public life, who, although good men in themselves, are from want of early education and manner, as well as of social ix>sition not qualified for honorary position at the hands of the Sovereign. In such cases there is danger of ridicule attaching to the persons honored, which may extend to the honor itself, and impair its value in public estimation, and this danger will be increased when (as must not infrequently happen) the disadvantages of want of education and manner are shared by the wife with her husband.”

AFTER THIS—which was somewhat prophetic— ■ titles came scantily. They came faster, strangely enough, under a Liberal Government. Sir Wilfrid Laurier, although an aristocrat to his finger-tips, had no personal craving for honors, but, like Lloyd George, knew their political value. Partly because of this, and partly because lie was an autonomist, he sought in 1902, to make recommendations for titles exclusively the Prime Minister's patronage, his attempt bringing this snooty note from Joseph Chamberlain, then Secretary of State for theColonies:

“In dealing with this subject I have been desirous of meeting the views of your Ministers so far as possible, but as the resixmsibilit y for making recommendations to the Sovereign. . rests with the Secretary of State and not. with your Ministers, it is his duty to obtain the best advice he can, and he must be the sole judge of what is the best advice.”

Despite this snub, the titles habit grew. Sir Wilfrid Laurier had had himself and live of his ministers knighted in fifteen years: Sir Robert Borden and five of his ministers Ix'came knights within live years. Knighthood was not merely in flower; it bkxmied in the strangest of places, with railway promoters, industrialists and journalists all in the bkxxn. By 1916, luncheon time at the Rideau Club resembled a gathering of King Arthur’s Court, and it would have been impossible to throw a stone on Parliament Hill without hitting Sir Somebody. We had as many Knights of St. Michael and St. George as we had Knights of Columbus or Knights of Pythias.

Even today, after fifteen barren years, the Canadian Honor List shows the following:

The holders of these honors are not all resident in Canada ; some have passed with death within the year; a number are held by military men. Yet honors, even apart from distinguished exiles, are far from extinct.

Trouble in 1918 arose from the fact that some of our knights and barons were not particularly popular. Two or three of them, in fact., were distinctly unpopular. Consequently, when Mr W. F. Nickle, K. C.. moved his famous anti-titles motion, it was amid national applause. Mr. Nickle’s original aim was to abolish only hereditary honors. The idea, however, caught fire; blazed so fiercely that Sir Wilfrid Laurier declared:

“I am quite prepared, if we can do so without disrespect to the Crown of England, to bring our titles to the market place and make a lx>nfire of them.”

There was no exodus to the market place and no bonfire, Continued on page 44

but there was something of a Government panic; so much so that Sir Robert Borden rose to say that the Government, through an order-in-council, would request of the Secretary of State for the Colonies:

1. No Canadian honors, except war decorations, unless with the approval and advice of the Prime Minister of Canada.

3. Appropriate action to see that “after a prescribed period’’ hereditary titles in existence should die out.

Mr. Nickle’s resolution was made Government policy and by a vote of 104 to 71 the policy was carried.

TN 1919 Mr. Nickle returned to the titles war. Encouraged by public applause— all of us were tremendously for democracy in those years he moved another resolution praying His Majesty to:

“refrain from conferring any titles upon your subjects living or domiciled in Canada.”

The debate which followed was one of the most extraordinary ever heard in Parliament. Led by Mr. Nickle and Andrew McMaster—the first a Conservative, the second a Liberal—M. P.’s fell upon barons, knights and all who held honors in a general massacre. The principles of the French Revolution were invoked; Robert Burns’

“A man’s a man for a’ that” was quoted 116 times; the word “democracy” just dripped upon Hansard. In the end, a committee of the House, having labored for weeks, drafted a resolution calling upon the King to:

“refrain hereafter from conferring any title or honor or distinction upon any of your subjects domiciled or ordinarily resident in Canada, save such appellations as are of a professional or vocational character, or which appertain to an office.”

This resolution, after another debate, was carried in the House by a vote of ninety-six to forty-three, was ordered to be engrossed and sent to the King. In due time and through the proper channels, the King acknowledged it. Nobody appeared to have thought about the attitude of the Senate.

And so begins a new chapter in the story of Canadian titles. Parliament in the next few weeks will add some interesting passages: the conclusion is likely to come from the electors, with the writing at the polls. 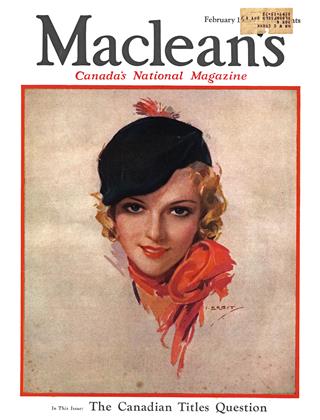