IF YOU ARE accustomed to think of law offices in terms of dignity and tradition, with middle-aged clerks burrowing among forgotten land titles, you will be considerably surprised at the pace life assumes in the offices of George Simon, counsellor at law. In fact, the legal premises of Mr. Simon bear rather less resemblance to a law office than to the rotunda of New York’s Grand Central Station at train time. It takes some time to disentangle the actual story from the characters. But, after a while, you discover that George Simon (John Barrymore) has been so busy directing the affairs of other people that he has overlooked his own and is in danger of losing both his professional rating and his chilly but beautiful wife (Doris Kenyon). When he finally discovers the state of his own affairs he attempts to throw himself from the twelfth story of the Empire State Building. However, he is saved by his devoted secretary and everything ends happily — at least as far as we are told, though one can’t help feeling that for people in George Simon’s business, and especially with his temperament, it would be wiser never to rent offices higher than the ground

As the Jewish counsellor at law, John Barrymore talks through three telephones at once, while laying out the day’s agenda and dictating to his secretary. Indeed, he reminds one of a specialty performer who can keep half a dozen balls and three pairs of Indian clubs in the air at once, while carrying on a conversation with the orchestra leader. Itis.of course, a different order of performance, but has the same dazzling competence. Miss Bebe Daniels is the secretary who in the midst of the furious give-andtake of dictation, finds time to fall in love with her employer.

“Counsellor at Law” is brisk

and absorbing acting, if rather exhausting,

“I Am Suzanne” has a modem setting. Dut the story itself is more likely to remind you of Hans Christian Andersen than of any Hollywood author. It is the tale of a dancer (Lilian Harvey) who falls in love with Tony the Puppetmaker (Gene Raymond). But Tony loves his puppets and Suzanne loves her public, and so they almost come to grief. It is a fragile little story told with extraordinary fantasy and grace. The Podrecca puppets in the performance are so amazingly human—especially the Liszt pianist—that the human actors have to exert themselves not to seem like mere wood and sawdust. Fortunately they are all good enough to stand the comparison.

Flying Down to Rio

There isn’t much fantasy about “Flying Down to Rio” but there is plenty of enterprise. For instance, the chorus at one point is shackled to the wings of airplanes and flown several thousand feet in the air. The interest here isn’t in the ensemble work—naturally a dancer hasn’t much to contribute when she is fastened by both feet to the floor— but in seeing several dozen Hollywood extra girls hanging upside down over the bay of Rio.

“Flying Down to Rio” also introduces a new ballroom dance, “The Carioca,” which is apparently any sort of dancing done by couples with their foreheads touching; not especially graceful, but it does look simple to pick up. The principal charm of “Flying Down to Rio” is contributed by Fred Astaire, the dancer and comedian, who has a sub-

Alice in Wonderland—Lewis Carroll’s ingenious fantasy faithfully screened. A film for all ages and both sexes.

Duck Soup—The Marx Brothers in one of their slighter divertissements. Funny and wild, but not wildly funny. Children will find it confusing.

Little Women — One of the year’s tenderest and most charming films. With Katharine Hepburn as Jo March. A family picture.

Ann Vickers—Sinclair Lewis’s heroine and her problems brought to the screen. A sober, well-acted picture — perhaps a little too sober. Not interesting for the young.

ordinate part. He really deserves a very fine picture all to himself.

Your sympathy toward “Going Hollywood” will depend largely on whether or not you are able to share the heroine’s infatuation for radio crooners. Bing Crosby is the hero, and he croons while he shaves, his secretary holding the microphone; croons while he packs his bags for Hollywood; croons to the crowds in the Grand Central Station; croons his way straight into the heart of Miss Marion Davies, who immediately gives up her job as a schoolteacher and follows him to California.

There she meets and engages in competition with her rival, Lili Yvonne (Fifi D’Orsay). Miss Davies has nothing but her determination, her purity of motive and a rather notable collection of the new windswept clothes. Fifi has a remarkable temperament, a number of questionable but fascinating habits and a leading part in Bing Crosby’s picture. She also has Bing Crosby. In the end the schoolteacher has her own way, rescuing Bing Crosby from a Mexican bar and from the attentions of Yvonne, whom he describes in song as his Temptation. On the whole, “Going Hollywood” is better than it sounds.

“Design For Living” is, in origin at least, Noel Coward’s tale of the heroine with the two heroes, neither of whom she could live without. She tries first one, then the other, and in the end finds it quite impossible to get along with less than both. Thanks to Miriam Hopkins, who plays the heroine, and to Ernst Lubitsch, who is responsible for the direction, “Design For Living” presents a situation rather than a problem. The parts of the two heroes are not entirely satisfactorily taken by Frederic March and Gary Cooper. Frederic March is rather too mild in feature and manner for the incorrigibility of his rôle; and Gary Cooper is more fitted for a Zane Grey than for a Noel Coward part.

Hollywood is showing an increasing tendency to pick its stories from the front pages of the newspapers. And, as a rule, this makes for greater interest, liveliness and authenticity. It is a question, however, whether they haven’t gone too far, in their search for realism, in picturing the babykidnapping story. For this is a subject that has left a peculiar horror and sensitiveness in the public mind. This isn’t to say, however, that “Miss Fane’s Baby is Stolen” isn’t well worth seeing as a picture simply. It is set forth with intelligence and tact, and Dorothea Wieck’s performance as the mother is extraordinarily true, fine and restrained. Unusually competent as it is, however, “Miss Fane’s Baby is Stolen” isn’t likely to prove a popular success. It comes a little too close to actual tragedy and reality. 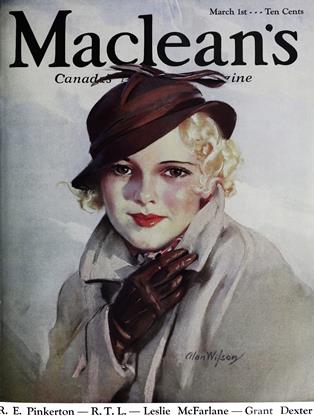