I DON’T KNOW,” said Big Jake, staring stonily through the dingy window of the Smithville Hotel at the dusty stretch of Smithville’s Main Street, “what we ever stopped in this burg for.”

“How long before it’s fixed?”

“It should be ready now. I think I’ll stroll around a bit. Maybe pick up a little change.” “Yeah,” grunted Big Jake. “They’ve financed this town since it started, on the nine dollars change the Indians gave ’em back from their tenspot. If you get two bits here, the street cars will stop running.”

“Aw, you can’t tell.” Smoky Agnew took his feet down off the brass window rail, got up and strolled out of the hotel.

The station hack stopped in front of the hotel. A slim, white-haired man, carrying a dark topcoat on his arm and wearing a derby hat, got out, took his bag from the driver, paid his fare and entered the lobby. Big Jake watched him, twisting about in his chair. He liked to figure out what people were, and he was a little puzzled about this man. He didn’t look like a salesman. Maybe a lawyer . . .

The stranger signed the register. The clerk handed a key to a frowsy-looking bell-hop, who led the way upstairs. Big Jake’s eyes narrowed. He got quickly out of his chair and walked over to the desk.

“Any mail for T. Wilson Ransome?”

The clerk turned to gape into the pigeonholes behind him. Big Jake stooped and retrieved a letter that had dropped from the inner pocket of the slim man’s topcoat. It was in Big Jake’s pocket when the clerk turned and said :

“Okay,” said Big Jake with a wave of the hand. “If any comes, forward it to the Ritz Carleton in Montreal.”

He walked out of the hotel, turned the first comer on Main Street and took thé letter from the already opened envelope. The stationery was elegantly embossed with the name of the Overland Oil Company. A big concern. Jake knew it well. He’d sold their stock, though they didn’t know it. He read:

Dear Summers: We want you to run down to Smithville and purchase the lot on the Post Road where it intersects the Meadowbrook Turnpike. It belongs to a young man named W ilbur K. Adams, who is employed at Emmet’s Garage. We are prepared to pay three thousand dollars. We anticipate no trouble in acquiring it. As it is very important that we purchase this lot, we would urge you to lose no time. Sincerely,

Big Jake reached out and caught the arm of a passer-by.

“You’re right in front of it, mister.”

He stuffed the letter in his pocket and, with senatorial slowness, strolled into Emmet’s Garage and looked about him.

GAW KY-LOOKING youth came out of the 1 shadows, wiping his hands on some cotton waste. Big Jake beamed on him.

It s my business to know the leading young men in a community. Now, Mr. Adams, I won’t waste time. I have to get out of here in a few minutes. In passing through, it occurred to me that I might be interested in buying that bit of land you have at the junction of the Post Road and the Meadowbrook Turnpike.”

“Mr. Allingham. I’d be tickled to sell it. Would you give much for it?”

Just a minute, Mr. Adams.” Big Jake smiled tolerantly. “We don’t do business that way. What we do is to take an option at that price for, say, six months. I II pay you ten dollars extra, here and now, for that. Then, if I’m sure I want the land, I'll pay five hundred within six months.” “That’s all right, Mr. Allingham. That’s swell. I been try in’ to sell it for years.”

“Good. Then we’ll just go into the office, and I ’ll make out a little memorandum for us both to sign. You’re a keen young man, Mr. Adams. You won’t regret this.”

Big Jake wrote out the option. Wilbur was ready with his own pen. He signed bravely. Big Jake put ten dollars in his left hand, shook his right, tucked his option away and departed.

He whistled blithely. He was still whistling when the rude honking of a horn interrupted him. lie turned his head with slow dignity and looked distastefully at the grinning face of Smoky, who had stopped the car abreast of him.

I d get clear of that bum today,” he thought.

I m going to do business wdth the Overland Oil people good business. But that tinhorn won’t be in on it.”

He walked over to the little coupé and climbed in. “Let’s go,” he said.

“Oke,” grinned Smoky, and he kept on grinning. That grin irritated Big Jake.

‘What’re you so blithe about, friend?” he asked. “Find a nickel?”

“Better n that. I cashed a cheque, ten bucks.” “Oh!” Big Jake sneered. Small stuff, as usual. He didn’t see much to grin about in that.

“Two of them paid for the repairs to the car, and I got eight bucks change.” Smoky chuckled. “Any more to it?” queried Big Jake.

“Sure. I sold the fountain pen to the sap who cashed the cheque—Wilbur K. Adams.”

“So W ilbur will have something to console himself with. I had the pen filled with that fadeout ink you worked on me one time. There won’t be a word on the cheque in ten minutes—”

Big Jake pulled what was supposed to be an option from his pocket, opened it and squinted at it. Blank! 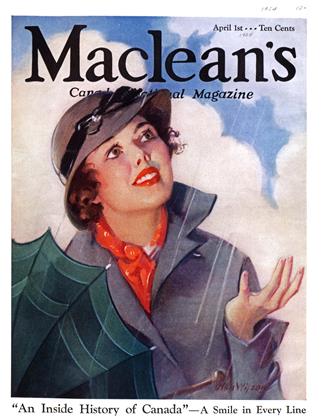