RIPTIDE” brings Norma Shearer back to the screen in some very new clothes and some very old predicaments. In her latest film. Miss Shearer is once more a Free Soul, living in New York according to her private code of conduct, which seems to bring her considerable satisfaction and variety. Presently she meets Lord Rexford, who is on his way to a fancy-dress party. Though dressed as a beetle, Lord Rexford is no playboy. Even as a beetle, he is serious and parliamentary. As a husband, he is even less amusing.

Miss Shearer, now Lady Mary', is at first a model of monogamy, but presently breaks out all over Cannes in the company of irresistible Tommy Trent (Robert Montgomery). To be sure, she is perfectly innocent, but Lord Rexford won’t believe it. Then when he does believe it, she isn’t innocent any more. Always a step behind. Though guilty, she now pretends to be innocent; but presently admits that she was guilty—not the first time but the second time. By this time both are so worn down by the whole problem that they are ready to abandon it and start afresh.

Miss Shearer is very beautiful and acts charmingly; so charmingly that, in view of her ability and enthusiasm, one is curious to see what she could do with a new plot.

There is a theory that people are endlessly fascinated by every detail of circus life, especially the life behind the scenes. Whether it is true or not, the makers of “Red Wagon” have built their picture solidly about this assumption. Life in the Big Tent in this film means Life, the Human Span, a whole generation of living before the “Red Wagon” is finally hitched to its star (Charles Bickford) and the story' begins.

Mr. Bickford does his best after such a belated arrival, and a big lion gets out of control and tries to eat up Miss Greta Nissen, but by this time it was too late; we had had so much circus that nothing less than a real circus lion prowling tow'ard us down the centre aisle could have attracted our notice. However, if you are one of those who can’t get enough of circuses, “Red Wagon” is your picture.

"The Trumpet Blows,” a bull-fighting picture featuring George Raft, started out to be impressive and dramatic after the style of Valentino’s “Blood and Sand.” Actually it is much closer to Eddie Cantor’s “The Kid From Spain,” though not so funny. Maybe it was because George Raft was—justifiably—uneasy in his part. Maybe it was Adolphe Menjou who set the wrong note—as a Mexican bandit in an embroidered blouse with bishop sleeves. “He’s only met small-town bulls yet,” Mr. Menjou says peevishly of Matador Raft; meaning, wait till he meets a Big League bull. When he did, you need scarcely be told he conquered it, earned the plaudits of the aficionados, and married the girl he loved. The setting of “The Trumpet Blows” is Mexican. But the idiom is strictly Brooklynese.

The House of Rothschild

Each new Arliss film is invariably announced as George Arliss’s greatest picture since Disraeli. Just as we reached r the point where thisannouncement couldn’t

fool us any longer, it turns out to be true. Mr. Arliss’s Rothschild is quite as good as his Disraeli. To say that his Rothschild was his Disraeli isn’t in this case to be invidious. Both were brilliantly conniving old gentlemen who could, when it suited them, stand Europe on its head ; and the fact that, as screen characters, they are fairly identical doesn’t make them any less interesting.

“The House of Rothschild” is a romance of international banking at the time of the Napoleonic wars; an action picture with pounds sterling fighting armies on the field of Waterloo. The use of technicolor in the final court scene is not altogether fortunate. Technicolor is improving, but it still has the look of hand painting applied brightly to art photography. On the whole, however, “The House of Rothschild” is one of the season’s best pictures, decidedly not to be missed.

If the first requisite of a comedian is to be funny, the second is to be endearing. And in “You’re Telling Me.” W. C. Fields is both superlatively. He is a small-town inventor, a fey soul always engaged on the ultimate burglar trap, always pleasantly dazed or alcoholic, and always surrounded by people who are morosely sensible and sober. In fact, he is just the sort of citizen who in real life drives his family to suicide. On the screen, of course, it is Mr. Field who is driven to suicide; and suicide, as a funny idea, couldn’t have fallen into better hands. This is Mr. Fields’ first feature picture, and the supporting players—Adrienne Ames, Joan Marsh, Buster Crabbe—don’t make the mistake of trying to take any of it away from him.

George White, himself, appears at intervals in the film which carries his name. He is a brisk, purposeful, wideawake looking young man; which is really the only reason one has for supposing he knew what he was doing in making this picture. It has a number of singing and dancing ensembles, and a story which comes and goes, and which, for all the influence it has on the picture, might just as well have stayed in its author’s head or in Mr. White’s top drawer or out in the alley. Jimmy Durante and Cliff Edwards are there to make it funny and Rudy Vallee to make it romantic and soothing. They do their best with their material, but none of it is particularly bright or memorable.

The Lost Patrol—Strictly masculine epic of disaster. With Victor McLaglen, Boris Karloff. Impressive in outline, but weak in detail. For adults.

Death Takes a Holiday—Chilling little allegory, in which Death, in the person of Fredric March, visits an Italian house party. Not for children.

Friday the 13th—English bus adventure, with half a dozen type characters and destiny at the wheel. Fairly exciting.

Six of a Kind—W. C. Fields and Alison Skipworth, Charles Ruggles and Mary Boland, George Burns and Gracie Allen hilariously at large in the American scene. A family picture if the family isn’t too young.

Four Frightened People—Four not of a kind—a schoolteacher, a journalist, a clubwoman, a chemist-at large

Palooka—Strange consequences of training a prizefighter (Stuart Irwin) and stranger inconsequences of Jimmy Durante as his manager. Ribald, but sometimes funny.

Catherine the Great—Catherine, her life and times, with Elizabeth Bergner in the title rôle. Impressive, handsomely mounted picture, with certain improvisations on history. A family film.

Queen Christina—More flying in the face of history. But the Garbo face was never better. For Garbo admirers of all ages.

Nana—Anna Sten as one of the major distractions of the Second Empire. Impressively detailed picture. For adults. . . „ •

Convention City—The atmosphere of “Convention City is decidedly of the smoking room. But it is often funny. Not for the very young.

Spitfire—Katharine Hepburn as a pious, fighting waif, accused of putting a hex on a mountain community. A picture which leads to the suspicion that someone is trying to put a hex on Miss Hepburn.

David Harum—Horse swapping, stick whittling, gig racing, and courting in the antimacassar days. Will Rogers in the title rôle brings the picture to life. A family film.

Looking for Trouble—Complexities in the life of a telephone man; which include love troubles, fire, murder and an earthquake. Jack Oakie, Spencer Tracy, Constance Cummings. Not a children’s picture. 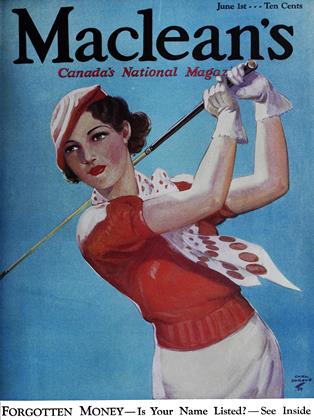