SO, THROUGH impenetrable jungle so thick that the bright light of noonday could scarcely filter in, bitten and tormented by hosts of flies, with deadly serpents slithering across our path or hanging from the branches of trees, ready to strike and destroy in an instant, we six men and our few servants pushed our way through the feverinfested lowlands of the Amazon and into those hills where the foot of white man never before had trod. So, worn and exhausted but buoyed up by the triumph of discovery, we came to the Forbidden Mesa and climbed its thousand steps to the ancient stronghold of the Incas.

“Among other things, we brought back these four little images beautifully carven in stone. These, we surmised, and have since definitely concluded, were meant to symbolize the days of their week, and were probably worshipped as minor gods. They are figures of men, each bearing some burden. This one carries a star, this one a sword, this one a bow and arrow, this one has an eagle perched on his shoulders. We thought it odd that, where these lost people were sun worshippers, there was no image bearing a sun, although in such of their writings as have been translated there are numerous allusions to the Day of the Sun...”

Captain Hilary Ross-Morton, the renowned South American explorer, continued to hold enthralled the great audience that packed to the door the Brant Museum’s large auditorium. On the platform, on either side of Captain Ross-Morton, sat James K. Leyden, president of the Natural History Society, and Dr. Munro, the curator. They were proud and happy men. Not in the town’s history had a personage so famous, so much in the public eye, as this noted explorer, deigned to come and give a lecture in the Brant Museum.

The cost was fabulous—for the Brant Museum. Even the receipts from the completely sold out auditorium would not cover the lecturer’s fee and expenses. It would be necessary to dip into the treasury, to curtail expenditures for a while and bring minor celebrities for the ensuing lectures of the series. But it was all worth while.

The lecture ended. A thunder of applause shook the high white walls and fluted pillars of the auditorium. Townsmen and their ladies crowded forward to shake humbly the hand that had helped claw its owner's way up the thousand steps of the Forbidden Mesa. Young and old gazed with reverent awe on Captain Hilary Ross-Morton. And the lion smiled with graceful condescension and accepted their homage as his due.

When the last of the worshippers had reluctantly drifted away, James K. Leyden and Dr. Munro invited the lecturer into the curator’s office. Jenkins, the treasurer, was waiting there. The cheque of four impressive figures Captain Ross-Morton pocketed casually, without glancing at it. He said, “Thank you, gentlemen,” and went out with two representatives of the Ladies Auxiliary who were waiting in the lobby to escort him to the hotel where a reception would be held.

Silence, in the curator’s orderly and spacious office, succeeded his going. Dr. Munro's eyes, behind their beribboned spectacles, held a far-off, vacant look, as if the worthy scientist, out of tail coat and stiff shirt and into a khaki blouse and shorts, were climbing the treacherous crumbling stairway of the thousand steps to the towering top of the Forbidden Mesa. Jenkins was working at his books. James K. Leyden was drumming on the smooth desk top with thick fingers. He was frowning. He was a businessman. This had been a great stroke of business—bringing Ross-Morton here, but it had

cost. Lord, how it had cost! Of course, everybody was pleased. Everybody had a good word for the Brant Museum and for the Board of Governors, and especially its distinguished and active president.

Just the same a thousand dollars was a lot of money. It set them back quite a bit. It had to be made up. Economies must be instituted at once. Mr. Leyden glanced through the open door and saw the auditorium lights still burning. He jumped up.

“Good lord!” he said. “Look at the way the lights are burning here—simply burning up money ! Who’s to look after that, Munro? Where is the janitor? Why isn’t he on the job? The man is incompetent. You had better discharge him and get someone at lower wages.”

“They’re pretty low now,” said Dr. Munro, pressing a bell. “And he’s been here a long time.” “No matter.” James K. Leyden wore the impressive, stem-eyed look of the captain of industry before whom incompetence folded up and died. “It’s his place to see that the lights are turned off the moment there is no need for them. Where is he? What’s keeping him?”

A LITTLE old man, bent, his white hair scanty, the skin of his face cracked and wizened like the shell of a walnut, shuffled into the room. His name was Barney. No one around the Brant Museum knew his other name. Dr. Munro had heard and forgotten it.

“What kept you, my man?” demanded James K. Leyden. “Why aren’t you about your duties?” Barney lifted to his vanished forelock a gnarled hand that had a blue star tattooed on the shiny, veined parchment skin of the back.

“Sorry, Mr. Leyden, sir. I were bankin’ the furnace fire for the night. I didn’t know the lecksher was over.”

“Why,” sneered James K. Leyden, “it’s a wonder you weren’t present! You seem to be a privileged character. Turn out the lights.”

Barney’s pale blue, lustreless eyes looked vaguely at James K. before, in obedience, he shuffled to the switchboard in the hall and blackened the auditorium in a slow moment. Leyden watched his deliberate, aged motions with chill-eyed contempt.

“See about replacing that man tomorrow, Dr. Munro. We have to save money around here and I’m showing you one way it can be done.”

“I really don’t see—” began the curator timidly. “Beg pardon, sir and doctor.” Barney had shuffled into the room.

James K. Leyden stared at him with repressed rage.

“Yes, Barney?” Dr. Munro looked at the floor. “I been here a number o’ years now, ye know. An’ maybe I’m not so quick as might be, but I’ve tried to do my duty as best I knew how. I spoke to ye, doctor, about needin’ five dollars a month extry. It’s not for myself. I have a married daughter whose husband ain’t been so lucky of late and—”

“Well !” James K. Leyden exploded. “Of all the nerve! Listen to me, my man: you’re discharged. You’re through here. You aren’t up to the work and we can get a better man for less money.”

“Eh !” Barney squinted at him, dazed, for a moment not comprehending him at all.

“This lecture on South America cost us a thousand dollars and we have to cut down, to save money,” continued Dr. Munro wretchedly.

“But—” Barney’s fingers groped at his chin. “It comes kind o’ suddenlike. I thought I was doin’

He turned away, took two shuffling steps and came back. He fumbled inside his old coat, sizes too large for him.

“I don’t hold no grudge, though. Ye remember, doctor, I promised ye somethin’ for the museum. It's a little god or somethin’ we picked up—Charley Dodd, my mate, and me—down to South Ameriky.”

Out of his tattered pocket Barney pulled something wrapped in a blue bandana. James K. Leyden sniffed with disgust. Dr. Munro coughed to hide his smile. Barney shuffled over to the table, unwrapped the bandana and set down a little stone image, bearing on its shoulder the round, shiny ball of the sun.

The curator stared and gasped and touched the thing with shaking hands. James K. Leyden’s eyes popped. Jenkins’s pen was poised in mid-air, a drop of ink forming on its point.

“Where did you get this, Barney?” The curator’s eyes were glued on the image.

“Up the Amazon. Me and Charley Dodd —my mate, ye know—went huntin’ for gold. Years ago, that was. We were young. We pushed through a lot of jungle an’ swamp. Flies were bad. Saw a snake or two. Clumb up a mountain with a lot of steps cut in the stone, easy as pie, an’ found one o’ those old Inky settlements. No gold, though; just some little stone gods—an’ I fetched this ’un away.”

“A thousand dollars we paid,” muttered Leyden. “If people ever found out. . .” He turned to Barney. “We'll keep you on, Barney, and—and give you that raise.”

Barney’s mouth hung open. He could only bow and scrape to Leyden and Dr. Munro. He turned to go.

“By the way,” said James K. Leyden, “You—ah—won’t go around spinning this yarn about that little god. It might be just as well—”

“Yes, sir.” Barney raised his hand to his brow. “I don't yarn at all now, sir and doctor. Anyway, that weren’t much of a adventure. It were kind o’ tiresome.” 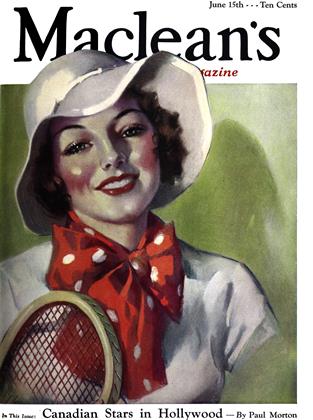