IF TIME and space were illusions and it were possible immediately to project ourselves into all parts of the British Empire, we would at this moment be astonished at the prevailing concentration upon things athletic. For this is the year when the senior sports champions will compete at London, England, in the second Imperial Games; and the schoolboy stars of the Empire will run, jump and throw in the City of Melbourne, Australia.

Are these sport events so momentous that they can temporarily overshadow tariffs, treaties, budgets and other national problems? No; but to the masses they are more interesting. The name of South Africa s Prime Minister may not be generally known, but if the son of a former Boer should outsprint the fleetest runners of the Empire, that athlete s name would be known and respected throughout the English-speaking sporting world.

*S-80 thoroughly aroused that the current plan is to spend boo,000 to dispatch a contingent of 100 men and women athletes.

But numbers alone will not ensure the success of the British Empire Games. I he quality of the competition will be more important. Will the rivalries be keen and the performers capable? They certainly will.

In early August, in the heart of the Empire, Canadian stars will meet hundreds of battling competitors fully charged with the will to vvm honors for themselves and their nation. Included in the list of track and field stalwarts will be J. P. Metcalfe, an Australian athlete \\ ho has high-jumped six feet six and one-half inches and has exceeded i ty feet m the running hop, step and jump. New Zealand's represen*yay include W. J. Savidan, who placed fourth in both the 0,000 and10,000 metres races at the last Olympiad, and Jack Lovelock, e world s record holder for one mile, now a student in England but rn in the island Dominion. If the Irish Free State chooses to compete —and she probably will—then Dr. Patrick O’Callaghan, twice Olympic champion hammer thrower, or R. M. N. Tisdall, current 400 metre \ mpic title holder, if in training, would almost certainlv necessitate the raising of the green flag to the top of the centre staff/ India has a good hurdler and sprinter; South Africa won three titles in the first -.mpire Games and is certain to be athletically prominent; and you can overestimate the strength of England and Scotland which won en irst and ten second places in the 1930 meet held in Hamilton,

T TNFORTUNATELY, most of the experienced campaigners whose speed and power have given Canada an enviable international reputation in recent years are now out of competition. Percy Williams, Olympic hero of 1928 and Empire champion of 1930, will manage the current Imperial team but will not compete: Alex Wilson, quarter-mile Empire titleholder and the fastest quarter and half-miler ever raised in Canada, will coach the team and is ineligible for competition; Phil Edwards, whose masterly strides have earned international jx>int.s for his adopted land may prefer study to racing, and even if he should run he must represent British Guiana. Duncan McNaughton, native of Cornwall, Ontario, and later resident of Vancouver, the reigning Olympic champion high jumper would be a welcome addition to the team but at time of writing is a doubtful entrant; while Eddie King, who advanced to the final in the Los Angeles 1,500 metres race, is also an uncertain starter.

In some of the jumps and most of the weight events, Canada's recent performances have not reached the standard required in international competition. This year, unless some budding athletes suddenly blossom into cnampionship flower, the Dominion's performances will lx* ordinary.

But the athletic picture is not all cloudy; indeed, there are many indications of sunshine. For example, during the 1934 indoor season Bert Pearson, youthful Hamilton flash, twice outsprinted Ralph Metcalfe, the ace of United States sprinters, and this youngster is so consistently six±edv that he is likely to win both the century and the furlong titles of the British Empire. Canada’s relay teams are invariably good. Fritz, a Windsor lad, is a fighting quarter-miler with real possibilities; Shaver, from Hamilton, is a good half-miler: in the onemile race, Wade of Montreal, Moore of Hamilton or Mitchell of Toronto, would ixmform creditably; Art Ravensdale, a Cobourg development, is Canada's best hurdler in many years; Holland or Hutton in full flight could probably fight it out for first place in the. running broad jump; while Gilbert of Hamilton, if he can repeat his jx>le-vault altitude of thirteen feet, should continue to be Imperial champion. In middle distance racing, England, Australia and New Zealand are formidable and would likely beat our best runners: but Ixmgman and Rankine or Bricker, if in condition, could honorably represent us.

In the crowd-acclaiming Marathon race, Webster, Burnside, Wycror Longman, capable as they are, would hardly lead Ferris of England or McLeod Wright, the Scot, who finished second and fourth at Los Angeles. But if Dave Komonen, Finnish-Canadian now residing in Sudbury, current holder of two United States championships and recent winner of the Boston Marathon, should receive his naturalization papers in time, then the Marathon race would become the most interesting event on the programme and Komonen might just "come through.”

Our (»iris Should Win

"D t T REGARDLESS of the failures or successes of mere men, you can depend upon it that Canadian girls, unless official differences interfere, will lead the Empire. The English lassies are particularly good in weights events, while Miss Clark from South Africa is a former holder of the world’s hurdling record; but feminine Canucks have always displayed international strength. In April three United States indoor titles were won by Toronto runners, and even though our weight-throwers are comparatively weak, it does not require an Continued on page 46

astonishing gift of prophecy to foretell that the Canadian girl athletes will win the Empire track and field title.

It is also hopeful to recall that in every internationally important athletic programme, some Canadian—Sherring, Kerr, Goulding, Thompson, Williams, McNaughton, Wilson, Grosse, Cook, Catherwood or Strike—has been inspired to amaze the sporting world. Somehow, somewhere, someone during 1934 will continue this reputation for sensational athletic ability.

While track and field athletics seem to dominate in both Olympic and Empire games, the other sports are equally important to devotees.

In the Imperial wrestling and boxing contests, the Canadian team will be well represented; but it is interesting to recall that while in the 1932 games the Dominion won every one of seven wrestling titles, not a single victory was obtained in eight boxing competitions. However, if Jackie Callura, of Hamilton, travels to London and fails to return with a championship, it will mystify the followers of fisticuffs.

But Canadian swimmers are also quite good. Within the last few weeks a Toronto team defeated the University of Michigan team, holders of the United States college championship. Bob Pirie, a youthful sensation, won the quarter-mile Y.M.C.A. title of the United States and broke the previous record. George Burleigh swam 100 yards in better time than any other Canadian; Alfie 1 Phillips. Imperial champion diver, was narI rowly beaten by the Olympic titleholder;

Í while Canadian mermaids are sufficiently capable to extend the world’s best.

The Dominion's bicycle champions will have to meet England's speedy cyclists, and even though most of Canada’s best riders are 5 now in the dizzy professional six-day whirl, still the Dominion’s crop of hustling pédaliers seems indestructible.

Our lawn bowlers will keep rolling along to continue the reputation for sportsmanship and ability always associated with the bowling fraternity.

nPHE CULMINATION of the second Empire Games in mid-August will not conclude Canada's 1934 bid for sport recognition. For our schoolboy stars, the curtain will just be rising.

Throughout the early summer each province will hold provincial schoolboy championships, after which the outstanding sectional athletes will move to Hamilton for the national trials. Following the latter tests,

twelve of the best athletes, providing their scholarship is also commendable, will be taken to Vancouver, outfitted in national togs and subjected to a week's training.

On October the tenth, these twelve sporting Galahads will sail to Australia in quest of the schoolboy championships of the Empire. They may even perform in New Zealand, and if they do a period of four months will be saturated with athletic adventures that will shame the story books.

Naturally, these expeditions to Australia and England require labor and money. Is the expenditure of $35,000 by Canadians likely to pay worth-while dividends?

Among the Empire Games liabilities would be listed the objection raised by South Africa to the inclusion of colored athletes in the Imperial contests, and the resulting change of venue from the Republic to the Motherland.

Equally dangerous with the incitement of racial differences, is the threat of a flag problem. Owing to the fact that so many of the Commonwealths and Dominions which make up the Empire now have their own national flags, the suggestion has been made that each unit should have a distinctive flag, and that the Union Jack itself should be flown only for Empire purposes. Canada, of course, has no separate national flag and probably will continue to carry the Empire ensign.

Disputes over the number and qualifications of officials are always associated with international jaunts, and this year’s games are keeping up with the tradition.

Even though flags, races and personalities tend to spoil the ideals of sportsmanship, still there are reasons why Canada should continue to play with the rest of the world.

No individuals or nations like to be remembered as “spongers,” yet the Dominion has received more favors than she has bestowed. When the first Empire Games were held in Hamilton in 1930. England generously sent a team of more than 100 and thus assured the success of the games; while the cost of providing a trip to Australia for a dozen Canadian boys is almost entirely contributed by Australian sportsmen. Surely when our share is comparatively small, we would be ungracious if we declined to pay something toward our own fun.

Furthermore, international sport is helpful because it creates favorable publicity and fosters better understandings. Finland and Japan are quite conscious of these influences, and the successes of the Nipponese at Los Angeles and the lusty encouragement given them by the enthusiastic Yankees created a friendly atmosphere that has done much to discourage war propaganda.

The nations of the British Empire need that same binding tie. After all, the cost of the trips to England and Melbourne will not equal the salaries paid to ten Members of Parliament—and the influence for good will perhaps be more evident. 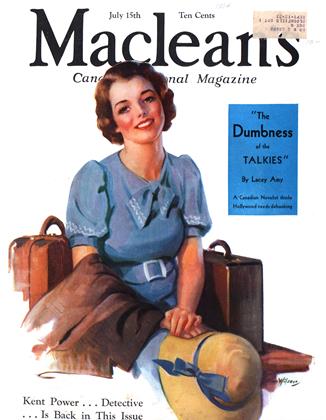