DARE to borrow-that is one pointer that is most needed by thousands of businessmen. Many a businessman has a horror of debt. He keeps his firm on a cash basis. He plays safe.

He sails out upon the ocean of trade and commerce with a small boat called Cash, and he keeps close to the shore.

He probably keeps so very close to the shore that he runs his boat on a rock and that is the end of it.

Later in life, he learns that most of the rocks are near the land; and that the deep water, far out, is safer than the shallows of the shore.

As I am telling the blunt truth, I am obliged to say this: if you want to play safe and avoid risk, you can never lie a financier at all unless you are bom one.

You may be able to keep uie money your father made, but you will never make much of your own.

Might as well tell a lion hunter to play safe as a financier.

Might as well tell a steeplejack not to run any risks.

The world of finance is full of risks, and neither I nor anyone else can tell you how to avoid all of them. An old lion hunter like Selous could give valuable pointers to a young hunter; but every lion hunter has scars on his body, make no mistake about that.

NOTHING is more profitable, in the long run, than a business risk taken wisely. Ask Lloyd’s. Ask any insurance company.

But a man must have courage enough. He must have sporting instincts. He must enjoy the adventure of a risk.

A man who will lie awake at night worrying about a debt should never have tried to be a financier at all. He should have remained an employee in a sure, safe, salaried job.

But as soon as a man has tested himself and proved that he is competent to handle other people’s money, then he should proceed to borrowas much money as he can use.

Andrew Carnegie, the man who made a $300,0(X),000 fortune in the steel business, once told me that he borrowed every penny he could get at the time when he started in business.

“I was the biggest borrower in Pennsylvania,” he said. “I kept one of my partners going from bank to bank, borrowing all he could get.”

Ask almost any rich man, and he will tell you that he ow-es a great deal of his success to a sum of money which he borrowed for a wise purpose.

A fewfirms, but not many, have financed themselves entirely out of their ow-n profits. But that is not finance, that is merchandising—quite a different thing.

Recently I met a businessman who told me he had been in business for twenty-seven years and had never borrov-ed a penny. He told me this with pride.

He had a small factory with fifty employees. His net income was probably $7,500 at the most.

That was well enough, but the point is—he had taken twenty-seven years to build his business up to the $7,500 mark.

If he had borro w-ed $25,000 in the beginning, he w-ould have built up his business in at least one-quarter of the time.

He forgot the time element. He had taken a lifetime to do what he might have done in five years.

There is Nothing so Cheap as Money. That is a fact that no labor leader has ever tried to contradict.

Consequently, it would save $20,000 of capital to borrow money instead of hiring

represents $10,800 of capital. Every little boy who gets S3 a week represents a money

Borrow All Yon Can Use

THERE IS very little net profit to be made by hiring labor. Take labor as a whole and you will find that it does not earn its ow-n wages.

It is Machinery that makes the profit—Machinery and Salesmanship and Management and Advertising and Personal Leadership.

Money and Brains—they make the profit in every line of business.

Labor has pushed up its own wages without pushing up its own efficiency: there you have the basic reason why there are so many unemployed.

The only profitable w-ay to hire a workman in these days is to put him in charge of a machine which you buy with money. The machine will then pay for itself. It will pay the man’s wages and a small profit besides.

Money means machinery and equipment and advertising and mass production.

Money puts the profit-making factors into a business—all of them except the brains.

Consequently, once a man is sure that he has brains, in a business sense, his next step should be to get money.

IF HE can get it without borrowing, that is the best of all; but if not, then he must borrow it.

from whom? Not from moneylenders. No one should ever go near a moneylender unless he is friendless and in a most desperate plight.

You can never make any profit out of money borrowed from a moneylender, for the simple reason that you are usually obliged to pay about ten per cent a month. Moreover, a moneylender’s office is apt to be a trap in which every possible penny is squeezed out of its victims.

No, you must get your money as cheaply as possible. Don’t pay seven jx-r cent if you can get enough money for six. It makes $500 a year difference in every $50,000.

Get it from a bank if you can. A bank’s business is lending money, and a bank will give you better terms and be more merciful in a hard year than any friend or relative.

Banks are generally supposed to be hard and heartless The fact is they are not. The last thing that any banker wants to do is ruin one of his borrow»«.

A banker is a skilled specialist on lending. He knows when to lend and when to refuse.

Certainly every man ought first to have acquired some money of his own before he dares to ask for money from other people.

But once you have proved that you can make a good use of money, it is better to borrowmore than to spend a whole lifetime earning it.

If you want to make more money more quickly, better borrowall you can use.

Editor’s Note— Key ten will appear in an early issue. 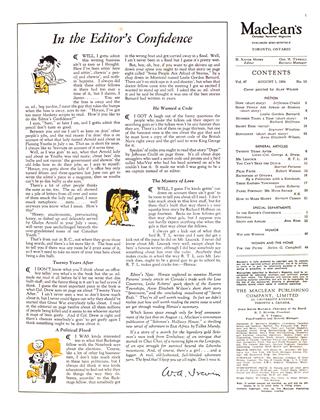