THE THIN MAN” is just about as good a mystery story as anyone could ask for. That is to say, it keeps you happily amused all the time it is keeping you anxiously waiting. It has, for one thing, a soundly constructed plot, tight at every joint—the sort of plot you can take apart and put together again after you get home and so have your fun all over again. Also it is one of those rare detective mysteries without either a comic butler or a half-witted servant maid. All the comedy falls to Detective William Powell and his charming wife (Myma Loy) who handle it beautifully. There is also a talented small dog named Asta who, with a little more encouragement, would have trotted off with the whole play and buried it in his own backyard.

There are several items in “The Thin Man” which might cause the Legion of Decency to fret a little. But on the whole it is very much the sort of entertainment that one goes to the movies for.

'"PHIS PICTURE isn’t so soundly constructed as “The 4Thin Man.” Indeed, its plot suggests pretty much the sort of loose collaboration you might expect from a highspirited house party playing “Murder.” People and corpses keep appearing and disappearing as suddenly and almost as mysteriously as goldfish from under a conjurer’s handkerchief. I never quite understood, for instance, how Bulldog contrived to get the heroine’s aunt—a substantial middleaged lady, totally insensible—down the waterspout to the ground three stories below; and the heroine (Loretta Young) kept turning up in so many places at the same time that she seemed to be doubling or even trebling for herself.

There is a great deal of surface liveliness and excitement, as well as some amusing comedy in the latest Bulldog picture. And Ronald Colman is so authoritative in his rôle, and Loretta Young so handsome in hers, that it doesn't seem very important if what they do doesn’t always make sense.

TF, LIKE the reviewer, you aren’t particularly devoted to circuses—that is, if the equestriennes don’t seem dazzling to you but merely hard-worked and middle-aged, and the aerial workers give you a nasty sinking feeling and the animals just look saddened and out of place—then you won’t get much out of Jete E. Brown’s latest picture, “The Circus Clown.” However, if you are young enough to find circuses glamorous and Joe E. Brown funny, then this is the picture for you to see.

There are only a limited number of things that can happen in a circus picture: a lion gets loose, the elephant gets scrubbed, love is bom of pity and the trapeze queen marries the humble clown. They all happen in “The Circus Clown,” which won’t either surprise or disappoint you in any particular.

CTEFAN KARPEK, a Budapest actor (Adolphe Menjou) is in love with an actress, Maruchka (Elissa Landi). Maruchka adores her art and considers herself quite as fine a performer as Stefan. Stefan adores Maruchka but thinks her acting terrible. He tells her so frequently, at the same time

assuring her that he himself is the great artist of the century. He has feeling, he has restraint, he has nuance; he has everything in fact except tact, and it isn’t much wonder he drives poor Maruchka nearly crazy.

This is fine though familiar material for comedy, and the picture starts off gaily as a sort of sham battle of the sexes. But presently it bogs down into drama and frustration, and goes on and on with Stefan getting poorer and poorer and more and more dispirited, and Maruchka getting richer and richer and more and more gesticulatory. Maybe it was the warm weather which made all these heated emotions seem oppressive. But I suspect it was just that the story was weak, and that Miss Landi, whose static beauty requires a rôle of fortitude rather than fireworks, was badly miscast.

Such Women are Dangerous

npiIIS PICTURE also starts out as comedy and presently L gets into deep waters. In this case, however, the drama takes the form of a murder trial; and murder trials, with battling counsels, the blanched prisoner in the dock and Mr. Herbert Mundin in the witness box, are good movie fare in any season.

“Such Women are Dangerous” is about a handsome novelist (Warner Baxter) and the various ladies who besieged him with notes, flowers, champagne, and good oldfashioned advice. It isn’t a very credible account of the life of a fiction writer, and I found it easier to believe in the beautiful girl who committed suicide because he hadn’t kept an appointment than in the rate at which novelist Baxter dictated his prose—sixty words a minute, final draft. Still, it was pretty terrible prose.

NOW I’LL TELL, by Mrs. Arnold Rothstein,” is exciting melodrama from start to finish. Based on the story of the unsolved Rothstein murder as told by the gambler’s widow, it has the more authentic qualities of biography. Like most underworld pictures, it presents a large gallery of unpleasant people, not the least unpleasant of whom were the good ones who kept reminding Gambler Golden how much better they were than he, and how happy their fine qualities made them. The picture, on the whole however, is highly interesting, thanks to the circumstantial New York background and to the firm handling of the principle rôle by Spencer Tracy.

Sadi« McKee—From poverty to penthouse, with Joan Crawford. As usual, Miss Crawford's motive» are on a much higher scale than her morals. Not for the young.

lllue Danube Nights—Charmingly screened Brttlsh-Gaumont picture which dramatizes the creation of the Strauss waltz. With Jessie Matthews. A family picture.

The Funny Frinks—With Hugh Herbert, Aline McMahon and Guy Kibbee in the cast, the Frinks couldn't help being funny; but the picture owes more to its performers than to its story. Alt about a family and its troubles, which families should appreciate.

Operator 13—Spy story of the Civil War. which doesn't attempt to be believable but manages to be exciting and amusing. With Marion Davies and Gary Cooper.

Stlngaree—"Take life In your stride." the dashing highwayman (Richard Dix) urges the timid heroine (Irene Dunne). Mr. Dix takes not only life in hi* stride but the mail coach trunks, the Governor-General's dress uniform and finally Miss Dunne herself. Galloping melodrama, with Mary Boland to keep it from being too serious.

Where Sinners Meet—A long, polite, complicated and not particularly interesting comedy romance. With Clive Brook and Diana Wynyard. Children will be bored by it, and so will many adults.

Viva Villa—This picture is noisy, violent and occasionally brutal. It is also spectacular, authoritative and intensely interesting. Wallace Beery as Pancho Villa has never been better. A picture for the hardier-minded.

Tarzan and His Mate—The Tarzans at home in their gymnasiumjungle. There is some good comedy supplied largely by the animals, and the photography is spectacular. For young and old.

zage, the director, and Margaret Sullavan and Douglass Montgomery the actors, make this talc of young love and poverty one of the most poignant films of the season. Adults.

Men in White—The Pulitzer Prize hospital play transferred with high success to the screen, thanks largely to Director Boleslavsky and his camera man. With Clark Gable and Myma Loy. Adults.

Manhattan Melodrama—Myma Loy and Clark Gable again, the latter as a sort of minor DUlinger, who suffers for his various shootings in the end. The audience suffers quite a long time before. Not recommended.

The House of Rothschild—How the Battle of Waterloo was won in Baron Rothschild's banking house. George Arliss’S finest picture for some years. A iarnily film. 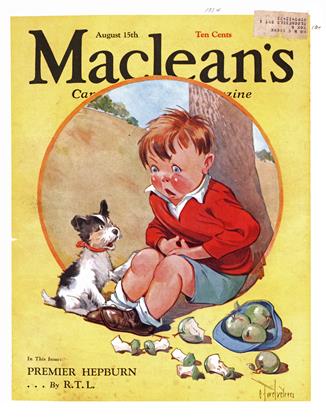