In the Editor’s Confidence September 1 1934

“My Dear Sir: I am writing to you at the request of my ship room-mate, Blank Blank. He fell head over heels in love with a young lady from Brooklyn, N. Y., and the dowager-type mamma is or was rather furious. 1 couldn’t blame her, though. It was quite a shock to all of us.

“He gave her your name and address for reference, and if the lady writes to you, he requests that you not spread it on thick, but give him a good send-off. Thanking you for your co-operation in this matter, Yours truly.”

Mamma has not yet applied for our certificate.

Here’s another one from an Ontario town: “Dear Sir: I am writing to ask you if it is lawable for a policeman to pick up a young fellow on the street if he is with a girl (a minor). I have a daughter who is going with a very nice boy which her father strongly objects to and has told the chief to pick him up if they are seen together. I would like to know if it can be done. Hoping to have an answer soon.”

(T A GLANCE through the miscellaneous mail re^ veals an alarming range of requests. One man wants to know how to get ahead in the furniture business; another how to become a taxidermist; another how to become “a colored artist.” A woman wants to know how to make dog biscuits because her dog is very fond of them and she cannot afford to buy them. Here's a lad who wants us to sell his false teeth for him and another who wants us to read his handwriting and tell him if he’ll make a successful undertaker. “How much lumber was cut in Ontario, bush measurement, in 1928 and 1933?” “Is it safe to travel on the Atlantic in March?” “I took French leave from the American army ten years ago. How long will I be imprisoned if I go back to the United States?” “Can you tell me if I’m entitled to the Blank estate. It’s been in Chancery in Ireland for ninety years.”

’The man sold me So-and-So mining stock for $567.50, and now I can’t sell it for anything. Can you tell me how to get my’money back.” “What’s the longest bridge in the world?” “Do you think petting is socially wrong?” “My father deposited some money in a bank in 1923 but has lost his memory. Please tell me where it would be!”

And with the requests for

information, of course, there’s also a constant flow of advice. The other day a woman phoned, objecting to pretty girl magazine covers. She had a boy growing up and wanted him to know there were other beautiful things in life than pretty girls. Would we please use covers of birds and butterflies? A couple of weeks ago there came an inspired message from a self-confessed seer in some city in India. He had, he said, established contact with Cosmic Force and as a result had had revealed to him “the cosmic philosophical fundament appertaining to out-reaching success as publisher.” We, being ignorance concerning fundament” were severely handicapped. How much better use his method for suitable “renumeration?”

Perhaps he’s right, at that.

Shop gossip being in order, we recall also the case of the author who offered a unique reason for the acceptance of a short story he was submitting. The story was a rather weird bit of tragedy built around the visit

of the central character to a European art gallery with an invisible companion. This invisible companion turned out to be his dead wife who had always wanted to see a European art gallery but had never been able to afford the trip. The writer explained that his wife had really died and that he was desperately anxious for us to buy the story, as a rejection would mean he would be unable to furnish his wife's grave with a tombstone.

The strangest part of the story is the fact that we did buy the manuscript.

(f THE FOLLOWING has nothing to do with the subject under discussion but it's really too good an example of metaphor scrambling to pass up. It's from the market letter of a New York brokerage house: “The palls of depression are slowly lifting, a concerted action is being indulged in to stamp out its dregs, credit is plentiful and the security will arrive and be accepted that will allow this immense reservoir to be tapped and thus permit the wheels of industry to turn with greater speed.”

(T EIGHTY-ONE years ago an American fleet under Commodore Perry landed an armed force on the shores of the bay of Yeddo, Japan, and thereby convinced a fiercely selfcontained Japanese people of the futility of trying to resist the onslaught of Western industrialism with the resources of a feudal economy. Only now are the results of that and similar expeditions— the British followed Perry a year later—beginning to be fully apparent to a startled world. Industrialized Japan during the past four years has been teaching grandmother how to suck the eggs of international commerce with results little short of astounding.

During the years of the depression, since 1929 that is, the world's foreign trade has declined by more than sixty per cent. Japan’s foreign trade during the same period has doubled. Last year for the first time in history, Japanese textile mills exported more cotton goods than those of Great Britain. Watch the trade news and you’ll find that in Australia, Brazil, Africa, India, Ceylon, Peru, the East Indies, Mexico, Japanese goods of a widely assorted variety are lacing offered at prices that make the Western producer hold up his hands in holy horror. In Britain itself, Japanese-made shirts are being offered at a shilling apiece, socks at twopence a pair. Japanese factories are working double and triple shifts; a Japanese merchant marine is ploughing the seven seas of a world cluttered with idle shipping.

You’ll find the whole story outlined in Charles Lugrin Shaw’s “Japan Against the World” on page six of this issue. Canadians are notoriously provincial in their attitude or lack of attitude on foreign affairs, but we venture to suggest that sooner or later Canadians are going to become acutely conscious of this latest trade war, for trade war it is. Recently the pressure became so pronounced that Great Britain abandoned her traditional open door policy as it applied to the colonial empire and imposed drastic quota restrictions against Japanese goods. Australia and New Zealand, on the other hand, have evinced a tendency to play along with the Japanese, having found them good customers. Thus far Canada has been able to hang on to a neutral seat on the sidelines but it’s not a particularly comfortable neutral seat.

P. S. If you’re looking for an unusual fiction story, try “Lord of the Goose Call” by Will E. Ingersoll. You’ll find it on page three. 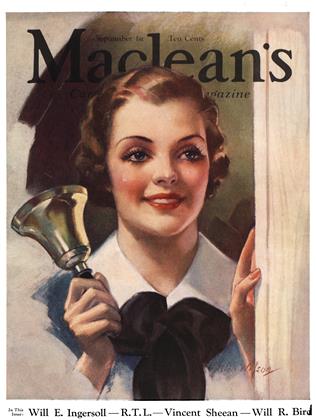