THE SCREEN VERSION of Sinclair Lewis’s novel does things to the original which will probably cause Mr. Lewis a good deal of indignation and surprise; that is unless, like a sensible author, he washed his hands of it completely once he had sold it up the river. Babbitt himself is very solidly there in the person of Guy Kibbee. And you will recognize Zenith and the athletic club with most of its romping members. The induction of George Babbitt as ringmaster of the Zenith Zebras is amusing, too, though not quite Sinclair Lewis.

After that, except for an occasional incident or bit of dialogue, the producers parted company with Mr. Lewis for good. I don’t know which was more disconcerting—to see the fatuous middle-aged Mrs. Judique turned into a smart young blackmailer, or to see Miss Claire Dodd, who is fresh, intelligent and charming, turned into Mrs. Judique. Better forget there was ever a book called Babbitt or an author called Sinclair Lewis when you go to see this picture. Then you will probably enjoy it—at any rate in spots.

YOU WON'T be able to forget that there was once a book called The Green Hat when you see "Outcast Lady.” It’s the same green hat we’ve been getting acquainted with all these years, not even reblocked to the season’s shape. This time it is Constance Bennett who is the fatal Iris. As usual, her young husband commits suicide on their wedding night under circumstances which, thanks to the modesties of censorship, allow us to believe the worst.

As Iris March, Miss Bennett is very handsome and passionate and wears some lovely clothes which don’t, however, bring the picture up to date. Sin may be no more old-iashioned on the Riviera than anywhere else, but the movies make it seem so. As a symbol of the abandoned life the green hat has lost its chic.

My Song for You

SMILING JAN KIEPURA attempts to repeat the success of his popular "Be Mine Tonight.” Though Mr. Kiepura continues to leap into action with song whenever things lag like a cheer leader trying to hearten up the crowd, it doesn’t do much

good. The scenario inches along from one small involvement to another, and the heroine is one of those head-tossing young ladies who believes that the world owes her not only a living but an apology.

pIIILD PERFORMERS as a rule put ^ this reviewer in the perfect spirit of St. Bartholomew's Eve. In spite of which I would be willing to cast a vote for Nova Pilbeam’s acting in "Little Friend” as the t>est dramatic performance of 1934. The story, which is about the effect of divorce on the mind of a sensitive child, isn’t particularly new. But little Nova Pilbeam, by making the situation real, makes it fresh. If anything it is almost too painfully real: you are actually in the world of a worried little girl surrounded by blundering, bad-tempered, egotistic adults. “Little Friend” is a British picture which everyone should see— except perhaps little girls who are inclined to feel sorry for themselves.

YY/TIAT THE MOVIES really need is a ’ ’ good censor. But the censor I would employ would cut out all the repeat choruses, at least two-thirds of the ensemble dancing numbers and most of the comic waiters, leaving the morals for someone else to worry about. In the case of “The Gay Divorcee” this would leave the stage practically clear for Fred Astaire, Ginger Rogers, Edward Everett Horton and Alice Brady, and I

don’t know what better anyone could ask.

On the other hand, it is probably ungrateful to complain of any film that turns Fred Astaire completely footloose over the furniture, as this picture does. He is probably the only dancing comedian in the world who can make an audience forget that the picture is nearly two hours long. Even when he isn’t on the screen you have all the excitement of waiting for him to reappear. I don’t know how he does it, but he is the sort of performer who makes hardbitten movie addicts want to sit down and write glowing fan letters. If you don’t believe it, go and see "The Gay Divorcee” for yourself.

BACK AGAIN and handsome as ever;

handsomer in fact since she has had her face freshly lifted by talented Ernst Lubitsch. Mr. Lubitsch has left both costuming and music intact and has turned Jeanette MacDonald into a real belle of the nineties with her bustles, bangs and dog-collars. But the comedy, pace and dialogue are strictly 1934. Altogether it’s just as fine entertainment today as it was thirty years ago. So if you missed it back in 1905, this is your chance to see what the fuss has been about all these years.

Maurice Chevalier and Jeanette MacDonald are happily cast in the leading rôles, and everything builds up grandly to the traditional waltz scene. I can’t remember what happened after that on the stage. What seems to have happened on the screen, how-

ever, is that Mr. Lubitsch called it a day and went off to lunch leaving things in the hands of the script girl, who worried through to the end on a note ol dogged whimsy. The conclusion is rather fiat and forced, but the picture as a whole is the best operetta entertainment of the present season.

Mrs. VViffgs Of The Cabbage Patch—Humorous folk play that used to have the audience in stitches thirty years ago. Not so amusing today, but the occasional presence of \V. C. Fields helps a lot. A family film.

What Every Woman Knows—Helen Hayes, very bright and persuasive in an intelligent screen adaptation of the stage play that made her famous.

Girl Of The I.imberlost—Movie version of the girlhood classic which may still be found on the shelves of Sunday School libraries. This rather than the screen is where it belongs. Not recommended.

The Richest Girl In The World—Fairly bright comedy about the rich girl who wanted to be married for herself and the poor young man who wanted to marry for dividends. With Muriel Hopkins.

Life Of Vergie W’inters—All about the milliner (Ann Harding), who scandalized the town. A warning to milliners to stick to their hats. Not for children.

Thine Is My Heart—Some improvisations with song on the life of Schubert. The story is weak, but Richard Tauber’s voice and the Schubert melodies make it worth listening to.

The Barretts Of Wimpole Street—Norma Shearer as the poetess Barrett, Fredric March as the poet Browning and Charles Laughton as the awful Victorian father. An adult picture and very fine.

The Last Gentleman—George Arliss in one of his favorite old codger rôles which may amuse you a little but won’t impress you deeply. A family picture.

The White Parade—All about the nursing profession; or how to change a bed without disturbing the patient. There’s a romance in it, between John Boles and Loretta Young, but it doesn’t get in the way of more serious considerations. Of interest to nurses.

St. Louis Kid—James Cagney in a rough and tumble picture about the milk war and the trucking business. Not very good, Cagney.

Chained—Joan Crawford does some dramatic clothes modelling. Clark Gable is in it, too. Not highly recommended.

Belle Of The Nineties—In which Mae West, in spite of the censors, manages to get in some critical comments on sex and man. 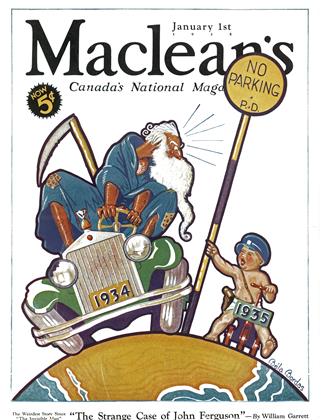