WE HAVE ADDED the two thousandth item to our list of Things We Intend To Do When We Get Around To It. It’s to write a brilliant piece on the peculiar identities of streets.

Already you have sensed the possibilities and are away ahead of us, so for the nonce (whatever a nonce is) we shall restrict ourself to a few short blocks.

You have, of course, heard of London’s Fleet Street? We thought so. We once heard an embittered man say that if you traced the history of Fleet Street you got the idea of journalism. It was narrow, crooked, and there was a sewer underneath. He wasn’t feeling very well that day, and perhaps we shouldn’t have men-

tioned it, particularly as some of the newspapers now dwell amid very moderne and chaste surroundings.

It is a fascinating street, Fleet Street. Extraordinary things happen there. Take, for instance, the case of Beverley Baxter, who entered it as an ex-piano salesman from Toronto and who, a few years later, walked along it as editor of the London Daily Express, confidant of the Great and Would-be Great.

Baxter is in Fleet Street no longer. He has gone to the British movie industry. But he has written a book that will perpetuate his exciting connection with what he calls “Strange Street.” Such is its interest, so vivid are his snapshots of the men who made British history during the most amazing decades following the war, that Maclean's presents “Strange Street” as a notable serial feature. The first installment is on page twelve.

No longer is there anything to marvel at inthefactof a man in his early forties writing his reminiscences. Events have moved speedily for this generation. The opening chapters, in which Beverley Baxter surveys his own early life, are a colorful proof that times have changed remarkably in the past thirty years. Succeeding chapters turn a revealing spotlight upon what transpired behind the news that in the past sixteen years has focused the attention of the world upon such streets as Downing Street.

<jj THEN THERE is the matter of the Canadian equivalent to what New Yorkers call just “The Street,” meaning Wall Street. In Montreal, the term St. James Street embraces not only the thoroughfare but the stock, bond and banking business. Bay Street in Toronto has something of the same atmosphere. Until recently, when the Ontario Securities Commission shut down on them, it was in danger of becoming what the

ancients would have called The Street of the Boiler Shops. There is no clanking, banging machinery in this type of Boiler Shop. Everything is very smooth. Too smooth. For Boiler Shop is the term applied to the establishments of fly-bynight brokers, market operators and sharp mining promoters. For some time V. F.

On page nine, he exposes the workings of the sucker list expert. He tells you the meaning of mooches, gimicks, coxies, pitches, loads and rehashes, of blaster and

taps. For the Boiler Shop has a language all its own. Bear in mind what Mr. Blackwood says. You never can tell when the gentry of whom he writes will bob up again in some new guise. Yield to their blandishments and you yourself may be out on the street.

“NO TWO men could be more unlike than Frankie Karisch, the bookie, and Rev. Septimus Metcalf. They met for less than a minute and never met again. Yet they formed twin halves of one august event.” So Phyllis Bentley begins “Twin Halves,” on page seven. It is a distinguished short story by an author whose novels—“Modern Tragedy,” “Inheritance” and “Spinner

of Years”—have brought her world fame.

Mary Carver’s mother said to her: “Never let your husband see you in the morning without your make-up. As you grow older you’ll understand the wisdom of my advice.” Then Mary married Bill Clayton. Bill was the sort of chap of whom his dancing partners said: “I am just a football in the arms of a broken-field runner.” So we weren’t a bit surprised when Bill got fed up with a doll-like person such as Mary. But the way he altered Mary’s idea of “The First Rule” certainly did leave us all agape. Dana Burnet thought it all up, and it is on page ten.

Not only the horses but humans too create plenty of excitement in A. W. Smith’s race-track story, “Gold Cup,” on display in stall fourteen, and K. HavilandTaylor, in “The Journey,” beginning on page seventeen, demonstrates that sentiment can be handled with restraint.

(J IN THE matter of journeys, on page nineteen Lieut.-Colonel George A. Drew has some interesting things to say about the manner in which Canada lags behind in the matter of air travel. He draws lessons from the recent London to Australia air race, and from the amazing things the airlines of the United States are accomplishing. Colonel Drew is no armchair critic. He has flown and re-flown Canada from coast to coast and from South to North; has had a bird’s-eye view of every city in Canada. In common parlance he knows his stuff.

ROBERT J. FLAHERTY is a man who makes less speedy hut even more colorful journeys. He is the man who filmed “Nanook of the North,” “Moana of the South Seas” and “Man of Aran,” which last-

named picture won the award of the International Congress of Motion Picture Producers (Mussolini giving final judgment) as the most outstanding picture produced in 1933. While he happened to be born in Michigan, Bob Flaherty considers himself a Canadian, for he spent most of his youth in Canada. On page sixteen, Rory O’More tells the story. 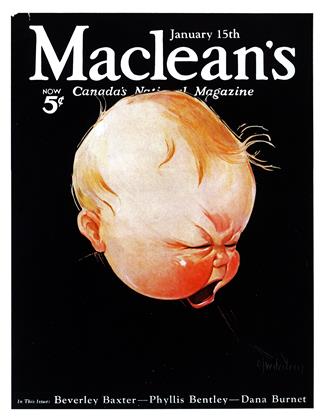