IN EVERY outline of normal food requirements we are sure to encounter the phrase, “At least two vegetables besides potatoes daily.” And most of us in our meal planning give to vegetables the consideration due to such worthy and important foods. But it is interesting to note how comparatively recent this change of attitude is. Only a few years ago cabbage and onions and turnips were practically despised, sauerkraut was not even mentioned in polite circles, nobody ever thought of eating beet greens and similar leafy products; but now a study of food values has elevated them to positions of respect on every table. Other vegetables which were considered a seasonal treat—mushrooms, asparagus, endive, green peppers and so on—are now available at almost any season of the year. And as further evidence of the social elevation of the vegetable, we see clever arrangements of brightly colored vegetables being used as decoration for the smartest dining tables.

Even yet, though, we come across the housekeeper who practically ignores vegetables. “Oh, no,” she’ll say, “none of us are very keen about vegetables, so I don’t bother much with them.”

That’s the time we should look about for a tactful way of telling her that if she would bother a bit, she might make her menus less monotonous, her budget more easily balanced, and her family healthier and happier. And it was the thought of people like these which first prompted us to do things with vegetables for this harvest-time article. Others who already realize the advantages of serving frequent vegetable dishes will perhaps be glad to find a new suggestion or combination among these recipes.

Seasonal vegetables are the most economical and best flavored, so those are the ones we choose when we plan our meals, and those are the ones which the canner preserves for future use. So all year round we can serve a variety of vegetable dishes; delicious dishes which require only a few moments preparation and yet transform “just vegetables” into appetizing family favorites.

It is no trouble then to persuade the children, or even to induce the grown-ups, to eat the vitamins and minerals needed in a balanced menu. Which brings us to two of the reasons why more and more vegetables are being served: We need those vitamins and minerals which are contained in the leaves or stalks or seeds or roots. Also, the bulk or cellulose contained is another good reason for their use. But because human nature is naturally contrary and is prone to rebel against eating dishes which are “good for you,” it is more effective to say little about the excellent nutritional qualities and to concentrate on developing fine flavor and arranging appealing color combinations.

To develop the finest flavor, vegetables

must be properly cooked, and one of the first rules is to cook them as short a time as possible. Overcooking is responsible for much of the dislike some people have for vegetables. Mild flavored vegetables as celery, asparagus, peas, etc., need only a small amount of water, while strong flavored ones, as cabbage, turnips, onions, etc., are as a rule more palatable when cooked rapidly in a large amount of water.

Most vegetables can be cooked in the oven—a method which conserves heat when other foods are being baked and one which produces a very pleasing flavor. The vegetables are prepared in the usual way, placed in a baking dish with a small amount of water, covered and cooked until tender, at the temperature which is best suited to the roast or pudding which is being cooked at the time. Combination vegetable dishes may call for some previously cooked and some raw vegetables, and many of the recipes prove to be an excellent way of dressing up left-overs for their second appearance.

Color is an important factor in making vegetable main dishes attractive, and there are plenty of vivid shades to choose from— the red of tomatoes, pimiento and beets, the deep orange-yellow of carrots, squash and sweet potatoes, the lighter yellow of corn, the purple of egg plant, and all the varying shades of green from the almost white cabbage to the dark green pepper or spinach. Complemented by the white of cauliflower, celery, onion or potato, artistic creations can be evolved which are practically irresistible to the palate.

These recipes which we are suggesting are for vegetable combinations suitable for luncheon or supper main dishes. In many cases left-over vegetable may be used, and in all cases we find the fruits of the harvest playing the most prominent part.

2 Tablespoonfuls of butter / Teaspoonful of pepper

Cook the spinach until tender, and season with three-quarters of a teaspoonful of salt, the butter and half the pepper. Press into a well-oiled ring mold while still hot. Meanwhile, hardcook the eggs, and when cold cut in halves crosswise, remove the yolks and season with the remaining salt, pepper and catsup. Refill the egg-whites, turn the spinach out on a plate and arrange the stuffed eggs close together in the centre of the ring, add the chopped pimientos to the white sauce and pour over the spinach. Serve at once. Six servings.

Dice the turnips and cook till tender. Meanwhile, chop the onion and the carrot and fry in the fat till a pale golden tint. Then stir in the flour, and cook till the mixture bubbles. Add the milk and stir till thick and creamy. Add seasonings and pour over the

Melt the butter, add the flour mixed with the dry seasonings and blend well. Add the milk mixed with the egg, gradually, and cook until thick. Add the corn and the Worcestershire sauce. Pour into a buttered baking dish, cover with crumbs and bake in a moderate oven—350 degrees Fahr.—until the crumbs are brown. Six to eight servings.

Rice boiled or baked sweet potatoes, and add the butter, salt and pepper. If necessary, add enough hot milk or cream to moisten the riced potatoes sufficiently to form into croquettes. Fry the sausages and cut in halves. Mold the sweet potatoes into croquettes, placing half a sausage in the ! centre of each. Beat the egg and mix with the water. Roll the croquette in sifted bread crumb, then roll in the egg mixture and again in the crumbs. Fry in deep fat at 390 degrees Fahr, until a rich brown. Six servings.

Peel the onions. Parboil thirty minutes or until tender in boiling salted water. Turn upside down to cool and remove part of centres. Fill with the uncooked sausage meat and place in a baking dish with a small amount of water. Sprinkle with buttered crumbs. Cover and cook in a moderate oven -—350 degrees Fahr.—until the onions are J soft. Remove the cover for the last ten minutes.

Peel the tomatoes, cut a slice from the top of each, scoop out a little of the centre, and place in a greased baking dish. Chop the peppers and the onion. Fill the tomatoes with a part of this mixture and spread the rest over the top. Dot with butter, using one and one-half tablespoonfuls, and sprinkle with the salt and pepper. Cover and bake in a hot oven—400 degrees Fahr.—for twenty-five minutes and remove to rounds of buttered toast and keep warm. In the baking dish, melt the remaining tablespoonful of butter and stir in the flour, blend well and add the cream gradually. Cook until thick and season with salt and pepper to taste. Pour over the tomatoes and serve at once. Six servings.

1 Cupful of milk 14 Teaspoonful of pepper

j Wash the cabbage and shred it finely, j Cook eight to ten minutes in boiling salted water and then drain. Meanwhile wash and dry the peppers. Place them directly over I low heat and toast them, turning frequently I to prevent burning. Scrape off the blistered j skin, remove the seeds, and cut the peppers

in long thin strips. Melt the fat in a deep frying pan, add the pepper strips, flour, salt and pepper. Stir well, and gradually add the milk. Cover and simmer slowly for fifteen minutes, or until the peppers are tender. Add the cooked cabbage, blend well, heat thoroughly and serve at once. Six servings.

Place alternate layers of carrot and apple in a buttered casserole, seasoning each layer with salt and sugar. Over the top sprinkle the lemon juice and grated rind, and dot with butter. Cover. Bake in a moderate oven—375 degrees Fahr.—until the apples are tender. Six servings.

Soak the cauliflower, head down, in cold salted water for thirty minutes. Parboil for ten minutes in boiling salted water. Drain until very dry on a cloth or paper towel Break into flowerets and dip first in the egg, slightly beaten and mixed with the milk, salt and pepper and then in the bread crumbs. Fry in deep fat at 390 degrees Fahr, until a deep golden brown. Serves lour.

Chop the cabbage coarsely and wash in cold water. Cook in boiling salted water until tender. In the meantime melt the butter and blend in the flour, salt and pepper. Stir in the boiling water and the evaporated milk gradually and cook, stirring constantly till thick. Drain the cabbage. Place alternate layers of cabbage, white sauce, green peppers and cheese in a greased baking dish. Sprinkle the top with buttered crumbs and chopped bacon and brown in a moderate oven—375 degrees Fahrenheit. Six servings. 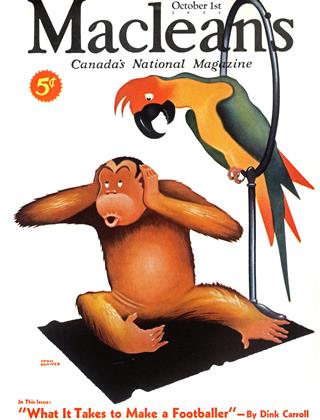