WITH Jean Harlow aboard, and Clark Gable as ship’s captain, you can look for a violent drop in the barometer. Add a mixed crew and Wallace Beery in one of his more ferociously blandishing moods and you get piracy, coastracketeering and general scattering of polite morale. It is taken for granted, of course, that the passenger list will also include a two-timing wife with her husband and lover, several coastwise ladies and a dipsomaniac author looking for local color. The Malay boot torture, however, and t he steam roller running amok during a typhoon in the coolie quarters, were something thought up extra. On the whole, taking the totally expected with the totally unexpected,“China Seas” is as stirring a melodrama as you are likely to come across during the current movie season, one violent climax leading into another and frequently overlapping it, till finally the typhoon squatters off to the right, the last pirate drops into the China Seas, Jean Harlow sits down and stops rocking t he boat, and everything liasses peacefully into the hands of a ship’s investigating committee. If you want a thoroughly lively evening in the movies you can’t do better than see “China Seas.”

PAGE MISS GLORY” is the story of a pair of flash promoters (Frank McHugh and Rat O’Brien), who create a synthetic photograph beauty out of the best features of Garbo, Dietrich, Harlow and Kay Francis. With this they win a prize-beauty contest which rocks the nation to its centre. It is meant to be a screaming burlesque on the ballyhoo racket, and might possibly have succeeded if the composite^ beauty had turned out to be, say, the Bride of Frankenstein instead of the anti-climactic Miss Marion Davies. Or if the principals of the story had stopped shouting for five minutes and got down to acting. Or if, finally, the producers had realized that ballyhoo is its own burlesque, and that a mere hearty jumping up and down on its stomach is at least as likely to take the wind out of the performers as out of the racket itself.

THE DANCING of Fred Astaire and Ginger Rogers is one of the most agreeable sights of civilization. This has been

of the rust-free wheat that had survived the gruelling agronomic tests were sent to these laboratories, and also to Britain and Europe, to get as wide a range of conditions and of milling and baking technique as possible. Further gruelling tests were conducted, this time regarding their ability to produce a strong and consistent dough, and a loaf of the best quality and texture, compared again with the supreme varieties of Canadian wheat. Any strain that did not come close to the standard was eliminated.

Then came the final test. Out of hundreds of strains, five had proved their superior quality. Ten-bushel lots of these were milled in a commercial mill and the flour distributed to commercial bakeries in Canada, the United States and Great Britain. The results were satisfactory. Wheat immune to all the known forms of black stem rust, and which was comparable to the best of the old varieties, had been produced.

In 1928 Professor Bailey told a writer for Maclean’s that the job would take ten years, more or less. The plant breeding work started in 1925, just ten years ago. The length of time required to grow a beard, rivalling in length and luxuriance that of the great Hebrew law-giver, has nothing to do with the case.

Ol the five best strains, one shows some superiority over the rest. About 1,000 bushels of it was harvested this season. Who

said before—possibly in this column—but that isn’t any good reason for not saying it again. In “Top Hat” they dance whenever the plot happens to bring them together; in fact, about the only good thing to be said for the plot is that it does this as often as possible. It’s one of those stories that involve endless misunderstandings, mistaken identities, slapped faces, blacked eyes, etc., before things are finally straightened away. However, with so many talented people about, the plot doesn’t matter much. “Top Hat” brings together Edward Everett Horton and Helen Broderick, a screen attachment which we hope will deepen. And don’t say you are sick of comic butlers till you see Eric Blore’s—a vagulous creature with an enormous wheedling leer, like a dentist in a nightmare. On the whole you couldn’t ask for better movie entertainment than “Top Hat.”

Steamboat Round the Bend

WILL ROGERS’S performance in “Steamboat Round the Bend.” his second last picture, is the one we are all familiar with. He is a Mississippi steamboat captain and medicine vendor, and he doesn’t differ in the slightest respect from the Connecticut Yankee or the Southern Judge or the Mid-west sausage manufacturer of preceding films. It was Will Rogers’s gift that he seemed uniquely native to any spot in America where he was set down, and at the same time always himself. “Steamboat Round the Bend” is a lively melodrama, with a race of Mississippi steamboats, five abreast, as a grand wind-up. Irvin S. Cobb is in the film, too, as a rival steamboat captain. Like Will Rogers, Author Cobb has both an extraordinary exterior and an easy way with the camera, which should ensure him a place in pictures. Not Will Rogers’s

Place, however. “Steamboat Round the Bend” is one of those infrequent family pictures which manage to be harmless for the young without boring the middleaged.

r"2fOING HIGHBROW,” with Edward Everett Horton, Guy Ivibbee and Zasu Pitts was last on a double-bill—the last half —and a little on the trifle-dessert order; quite a lot of whipped-up fuss and fidget round a rather stale basis. The fuss and fidget is largely supplied by Edward Everett Horton and Zasu Pitts: Zasu is a nervous newly-rich matron who wants to make good in New York society, and Edward Everett Horton is an officious middleaged bachelor who arranges, for a consideration, to get her introduced about. There’s the usual pair of young lovers, too, who twitter and bicker and take up time. “Going Highbrow” is the sort of picture that is used apparently to clean up a lot of odds and ends of contracts and story rights, and give the younger directorial boys a chance to try their hands.

A/fAD LOVE” is a nightmare production TVJ. about a French doctor whose specialty is graft surgery, and whose hobby is attending guillotine executions, where he picks up spare parts very much as though it were a wrecking dump. It’s a sweet idea and gets cumulatively more awful, up to a point where it unexpectedly becomes funny. I don’t just remember where, but I remember laughing and feeling much better as a result. Peter Lorre is the doctor, with his large round head completely shaved, so that from the front it looks like a jack-o’-lantern, and from the top and rear exactly like

a honeydew melon... I saw several mothers taking their little boys and girls in to see “Mad Love.” Children were not admitted unless accompanied by adults; but apparently there is no way of figuring adults.

The Farmer Takes A Wife.—Folk-picture of the early days of the Erie Canal. With Janet Gaynor as the barge cook who adored the canal, Henry Fonda, as the farmer, who adored the cook. For those who don’t like to be hurried over their entertainment.

She.—Film version of the Rider Haggard romance about the 500-year-old queen who renewed herself annually but tried rejuvenation once too often. This most recent screen version seems to have made the same mistake.

Curly Top.—Shirley Temple as an orphan adopted by a rich bachelor (John Boles) performs her specialties; dances, sings, recites and models ■ what the well dressed tot will wear. For Shirley admirers.

Accent On Youth.—Film version of the Broadway comedy, showing how a twenty-year-old girl may prefer a middleaged man of taste and charm, to a contemporary all muscle and bounce. Gay and entertaining. Sylvia Sidney, Herbert Marshall.

Ginger.—Jane Withers as a freckled, plainfeatured but engaging slum-child, tries to creep up on Shirley Temple. Withers supporters are reported enthusiastic, but Temple adherents remain calm.

Alice Adams.—Katharine Hepburn gives a fine performance as the Tarkington heroine whose ambitions were on the right, and whose family on the wrong, side of the railroad track. A family film.

I.ovc Me For Ever.—Grace Moore’s dependable soprano, some Puccini opera, and a bright comedy-romance. A fine evening’s entertainment for anybody.

Sanders Of The River.—Some fine African scenery and native songs and some magnificent choruses led by Paul Robeson. The story tends a little to be buried under its special features.

Becky Sharp.—Miriam Hopkins, the Battle of Waterloo and a number of episodes from the Thackeray novel, all brightly technicolored. Highly interesting and not to be missed.

Man On The Flying Trapeze.—W. C. Fields, deep as usual in business and woman trouble, light, but entertaining. A family film.

The Murder Man. — Part murder-mystery, part “Front Page” newspaper story, and not entirely successful as either. With Spencer Tracy. Not for children.

The Informer.—Dublin during the 1922 Sinn Fein rebellion; with a magnificent performance by Victor McLaglen. The year’s finest picture.

No More Ladies.—Robert Montgomery never more irresistible and Joan Crawford never less able to resist him. There are cocktails, quarrels, reconciliations and more quarrels till things get so complicated that Robert Montgomery sits down and has a good cry. Children taken to this picture by misguided adults will find adults more incomprehensible than ever.

Drake Of England.—Pageant of Elizabethan times, with Sir Francis rather elaborately represented by Matheson Lang. People who like history will enjoy it thoroughly. Those who enjoy movies will like it moderately.

Call Of The Wild.—Loretta Young and Clark Gable are the principals in this Alaskan tale, though obviously the product of Hollywood rather than Dawson. The story itself is good entertainment. 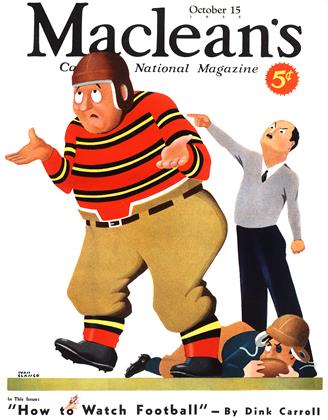