THE Max Reinhardt screen production of Shakespeare’s "Midsummer Night’s Dream" is a strange and beautiful film, utterly unlike anything ever seen before; as remote from the Ben Greet type of production as from the presentation of a high-school dramatic society. It isn’t exactly Shakespeare. because Shakespeare wrote for the ear rather than the eye; and though the Shakespearean lines are there unaltered, they tend to merge with the Mendelssohn music into a lovely haunting accompaniment to the highly pictorialized fantasy.

Shakespeare scholars would probably quarrel with this, but Shakespeare scholars rarely attend the movies anyway. You will like the sight of Victor Jory and Anita Louise as Oberon and Titania swooping lightly through the air on invisible wires; also the way in which the familiar Warner Brothers faces—James Cagney, Hugh Herbert and Joe E. Brown—gradually take on an Elizabethan quality. Children even more than adults will find themselves at home among the strange enchantments of the Reinhardt fairyland. Everyone should see it, both those who admire and those who avoid Shakespeare. Both groups will find it beyond expectation.

The Goose and the Gander

HPHE GOOSE and the Gander” puts * stately Kay Francis in the awkward position of having to be mischievous and skittish. She is the goose in the picture and Ralph Forbes the gander. Or else it was Genevieve Tobin who was the goose and George Brent the gander. It wasnever quite clear. Anyway they all get together in a country house, and a couple of jewel thieves come into it and a morose elderly aunt. Everyone keeps getting into the wrong bedrooms and popping up and down stairs and in and out windows, and things keep getting more complicated and unexciting every minute. Even Kay Francis’s clothes, which as a rule are something to count on, weren’t as becoming as usual. On the whole, both the audience and the producers seemed to have wasted their time and money on this feature. As the old saying is: What’s sauce for the audience is sauce for Warner Brothers.

A PICTURE TO stir up the romantic adolescent in all of us. In fact I haven’t been so excited, that is by anything of the same nature, since I used to read the Boy's

The work of the Saskatchewan Fish and Game League in organizing crow clubs, and through their radio talks and other publicity, has brought good results, but it is only a start in the right direction. The national consciousness must be awakened to the necessity of protecting our game and useful birds from their predatory enemies before far-reaching results can be obtained.

Stubble fields are the favorite nesting grounds of some species of ducks. Before the advent of the tractor and large fast moving machinery the majority of the nests in the stubble fields were spotted by the farmers, who moved them before the machines passed over them. Nests thus deprived of their natural cover stuck out on the blackened fields like sore thumbs and were easily spotted by the roving crows. Nevertheless a fair percentage of young birds were hatched from these nests.

Now, the farmer riding his tractor seldom spots a nest and if he does it is usually too late to stop, with the result that the nest and its contents are completely destroyed.

IS IT the anticipation of a dinner of roast duck or duck à la king that lures the hunter from his warm bed in the wee sma’ hours before dawn of a dreary October day,

Own Annual. It’s about a British sailor lad who, fished out of the sea by Germans after his ship has been sunk, manages to escape his captors and swim to land. There from behind a rock he opens battle with the German cruiser and in the end manages to get it sunk with practically all hands, drowning those he hasn’t been able to shoot.

It’s very different from the naval pictures we’ve been seeing for the past year, where the hero divides his time between classroom exercises and romantic love. At the same time, it’s decidedly not a picture to take the children to. The small boys and girls at a special Saturday morning showing shrieked themselves into frenzy over it, delightedly absorbing all the notions that earnest internationalists have been trying for years to keep out of their heads.

IF THIS picture doesn’t have you sobbing before it is over it isn’t the fault of the producers and director. They don’t go at it, to be sure, in the savage spirit of We’regoing-to-make-you-cry-and-like-it. On the contrary, the whole thing is managed with the greatest tact and modesty, as though everyone concerned, while determined to wring as many tears as possible, was a little ashamed to be caught doing it.

It’s about two boyhood friends (Herbert Marshall, Fredric March) who love the same girl (Merle Oberon) and how the favored one disappears in the war, turning up, blinded, a few years later to discover the other two on the eve of marriage. The point most likely to break you down is where the hero is discovered by his former sweetheart and pretends that he still has his sight—a trying moment which is handled with great considerateness by Miss Oberon and Mr. March. It’s all reasonably interesting, agony though it is from start to finish ; rather

as an operation might be interesting when conducted in nice surroundings under circumstances as merciful and competent as possible.

GRETA GARBO’S latest picture is a beautiful thing from start to finish. If you still doubt either Hollywood’s ability to deal with a masterpiece or Greta Garbo’s greatness as an artist, this is the picture to see. The adapters have taken only the main episodes of Anna’s story, but they and Garbo herself have sacrificed nothing of the essential Anna—a sensitive, direct and loving woman doomed to destruction in a malicious and fanatically formal society.

The star’s notable triumph in this picture is that she makes you forget Garbo completely and think only of Anna. Fredric March’s Vronsky won’t entirely make you forget Fredric March. However, as a lover he is handsome and persuasive enough to account for Anna’s infatuation, and that is all, probably all, that is necessary. "Anna Karenina” is a picture for everyone to see, even very young people, so long as they are old enough to understand a little the meaning of beauty, tenderness and sorrow.

T DON’T see how anyone could help enjoying this screen biography of a famous Broadway figure. Edward Arnold’s performance as Diamond Jim Brady is magnificent, and there is so much comedy and tragedy in his story and so much of the fine, rich, genuine tastelessness of the period in the picture itself. There is a touch of the late Roman Emperor about Edward Arnold’s general style, and Diamond Jim, with his banquets and opulence and sense of grandeur, fits into it perfectly. He’s genuinely Ameriam, of course, at the same time—gen-

erous, romantic, sentimental, with a passion for indigestible food, combined with a fantastic teetotalism.

It’s an impressive characterization. And when at the end Diamond Jim loses his sweetheart and goes out to kill himself by eating a barrel of oysters, he manages a sort of tragic majesty in his exit. I can’t imagine any other character, in the hands of any other actor, being able to do that.

China Seas.—Jean Harlow, Wallace Beery, Clark Gable, together with a typhoon and Chinese pirates; altogether anybody’s money’s worth of melodrama. But not for the very young.

'Call Of The Wild.—The Jack London story considerably modified by the presence of Loretta Young in a mackinaw tailleur and a water wave. Clark Gable is in it, too, but the best performer is a large, sad St. Bernard dog. Good entertainment.

Curly Top.—If you must have Shirley Temple, here she is with her complete bag of tricks. John Boles and Rochelle Hudson are also in the picture. For Shirley admirers only.

Mad Love.—Movie nightmare about a mad French surgeon who amputates the hands of a piamst and substitutes a pair from an executed murderer. There are a lot of other fancy outrages and, altogether, it is no picture to take the children to.

Top Hat.—Fred Astaire and Ginger Rogers dancing to Irving Berlin’s music. The plot, such as it is. is designed to keep them dancing, which is all anyone could ask. Highly recommended.

The Farmer Takes A Wife.—Story of the early days of the Erie Canal, with Janet Gaynor as the barge cook who loved the canal and Henry Fonda as the young man who loved the farm. They come together at last, but not till a lot of canal water has gone under the bridge. A slow but picturesque idyll.

Alice Adams. — Katharine Hepburn as the Booth Tarkington small-town heroine who lost her heart on the wrong side of the tracks. A good family film.

Accent On Youth.—Screen adaptation of the Broadway comedy which shows how a middleaged playwright may hold the advantage in love over a bouncing Princeton playbo.v . With Sylvia Sidney, Herbert Marshall. A witty, entertaining and pleasantly handled film. For adults.

Love Me For Ever.—Grace Moore brings all her sturdy talents, singing and acting, to this story of the love of an operatic star and a Broadway gambler (Leo Carillol. Good comedy well acted and good opera finely sung. Highly recommended. 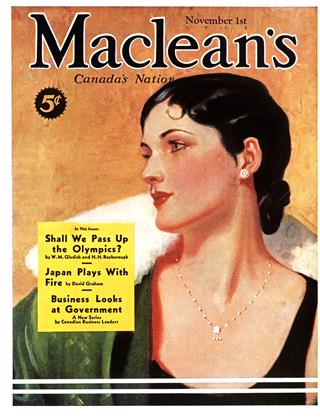