THE PRODUCERS of “Broadway Melody of 1936" had lots of money to spend on their revue, and they spent it wisely in securing expert talent rather than famous Hollywood names. The result is a tap-dancing heroine (Eleanor Powell) who actually tap-dances instead of whiling away her time on yachts while a double does the work in long shots. It’s a story about a Broadway musical comedy producer (Robert Taylor), and his small-town sweetheart (Eleanor Powell) who comes to New York looking for work—a plot that makes possible a large group of specialty numbers, including a monologue on snoring, with various crazing examples.

There’s nothing unusual about “Broadway Melody of 1936” except the professional competence of its performers. It should be reasonably entertaining to everyone except those who put musical revues and snoring in the same class as public nuisances. If you can enjoy both when done by experts, this is your picture.

She Married Her Boss

* I H I IS PICTURE finds Claudette Colbert back in the business world, helping to turn the wheels of the department store industry. She is secretary to the owner (Melvyn Douglas) whom she has loved in vain for years; a capable girl with a talent for keeping her mind on her work, but unfortunately no ability to take her employer’s mind off his. When he marries her it is simply to make her plant manager of his home, which needs a thorough shake-up and reorganization. She applies the thorough shake-up to him instead, by spending a night of hard drinking in one of his store windows. This makes him realize that he hasn’t married either an iron woman or a piece of superior office equipment, and wre leave them both happily taking leave of their business senses and heaving bricks through the plate-glass windows.

It’s always a little difficult to see Miss Colbert as a girl that men overlook, but this is nothing to complain about when she is such a pleasure to look at herself. In “She Married Her Boss,” both her looks and her comedy talents are at their best.

TJTERE’S TO ROMANCE” concerns the -*• difficulties and triumphs of an operatic tenor, Nino Donelli (Nino Martini). He is the protégé of a wealthy American (Genevieve Tobin) whose money helps him to his

triumphs and whose amorousness supplies him with his difficulties. For Nino loves a blonde dancer (Anita Louise) and before things are straightened out, the wealthy sponsor put in her place and the pretty dancer promoted to hers, the audience has listened to a repertoire of grand opera unequalled, in a single sitting, in movie history.

Martini sings generous excerpts from “Manon Lescaut,” “Cavalleria Rusticana.” “Mattinata” and “La Tosca,” with half a dozen popular numbers thrown in; and his incomparable tenor should win over even the diehards who up to now have been resisting ojiera on the screen. In addition to possessing a superb voice, Nino Martini is slim and attractive, with an ingratiating manner and a flashing Italian smile. “Here’s to Romance” should establish him firmly as first tenor in the grand opera company of the screen.

RICHARD TAUBER, celebrated tenor, - is a pleasure and privilege to listen to, even under the worst circumstances; and the circumstances in “Heart’s Desire” were pretty bad. It isn’t often one has to complain about a hero’s clothes, but Mr. Tauber’s clothes were terrible in this picture—a matronly hat trimmed with a large feather mount in one scene, and for his big singing number a Corsican outfit with a sash and little pants.

Then there was the heroine—a spoiled, bossy, beautiful girl with a rippling laugh and a passion for collecting geniuses and promoting them. I rather hoped that genius Tauber would turn on her with a snarl when she said for the fifth time. “Won’t you please do this—for me?” But it seemed he loved her. and when she went back to her other genius—a wan young composer whom she had picked from an attic and who still bore marked signs of deprivation—her singer went back to the beer garden from which

she had picked him; secretly relieved, one felt, to be rid of his proud, commanding beauty.

DIG BROADCAST OF 1936” had so many famous names on its posters that it was a popular success before the public got any farther than the lobby. If anything, it is congested with talent—Bill Robinson, Amos ’n’ Andy, Boland and Ruggles, Bums and Allen, Ina Ray Hutton with her Melodears, Ethel Merman with a herd of elephants; everybody, in fact, who is anybody on the air or off it except Father Coughlin, the ecclesiastical note being supplied by the Vienna choir boys. There is a story too, because even a musical revue has to have a plot these days; a rather desperate contrivance about a couple of radio performers marooned on an island with a countess and a tele-radio, both completely mad.

With so much assorted talent as there is in “Big Broadcast of 1936,” there is something for everyone and it’s just a case of waiting for your number to turn up. Some people, however, may find the interludes of waiting rather longer than the intervals of entertainment.

VW'HEN Stanley MacLaurel (Stanley * * Laurel) burned up his friend’s trousers and he and Oliver Hardy went out to order a new pair, nothing could be more natural than that they should find themselves joined up with the British Army instead and on the way to India. From then on we get the Lives of Laurel and Hardy, freely adapted from the Lives of Bengal Lancers Cooper and Tone.

It’s very funny and, with this as a start, we hope the two will pay their disrespects to other film classics; Laurel and Hardy as GMen, or Laurel and Hardy calling on the House of Rothschild. Young love comes

into “Bonnie Scotland” and has its usual upsets and recoveries, but even young love can’t do a picture any harm so long as Laurel and Hardy are within falling distance of the camera. 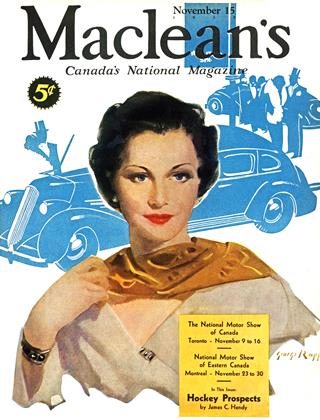