NOBODY is going to be disappointed in “The Crusades,” either the ones who delight in the prodigious Mr. de Mille or the ones who shudder at him. It’s typical in other words, and goes to show how profoundly the history of the Middle Ages was influenced by the beauty of Miss Loretta Young. The research students have been active, and the costumes, coats of mail, vats of oil, siege towers, catapults, etc., are rendered as authoritatively as possible by Mr. de Mille, who has the greatest respect for everything historical except possibly the course of events.

It’s a grand spectacle from start to finish, with two impressive climaxes, a siege and battle. In the intervals there is much parading of Christian princes and heathen leaders with their armies, some lively hand-to-hand lighting, a good deal of love making on the grand scale between Coeur-de-Lion (Henry Wilcoxon) and Berengaria (Loretta Young). The most significant departure from the de Mille formula—and perhaps the closest approximation to history in the Middle Ages—is that nobody takes a bath. Apart from this, it is everything you could look for; history handsomely simonized by Cecil de Mille and moving with action, pace and glitter.

WHEN ENGLISH producers do an international mystery play they do a real job; witness “Rome Express,” “The Man Who Knew Too Much,” and now the John Buchan film, “The 39 Steps.” This is partly because they deliberately play down the romantic glamor element, keeping the plot swift and tense and not Mata-harried all over the place, partly because their underworld characters are all trained apparently in the European diplomatic service. “The 39 Steps” is as polite as Geneva and as wicked as a dozen G-men pictures in one. Action begins w'hen a beautiful woman spy stumbles into the London bedroom of a visiting Canadian (Robert Donat) with a knife in her back. After that there is no rest for the hero, or the villain (Godfrey Tearle), or for the beautiful girl (Madeleine Carroll) who is presently but not too seriously involved, or for the local police or for you or me. The method used for getting information out of the country is wildly elaborate. Remember Myrna Loy and how she carried fortification plans in invisible ink on her step-ins? Well, it’s even more ingenious

than that. Everything in “The 39 Steps” is as improbable as possible, but you’ll believe it anyway while it is happening—it’s a case of the handling being quicker than the eye. Highly recommended.

This is the Life

TF I HAD someone whom I particularly hated, someone who stole my milk bottles and left telephone numbers for me to call the Zoo, and wanted to get even, 1 would cunningly insert into his mind the idea of going to see little Jane Withers in “This is the Life.” It’s a sort of combination of Our Gang comedy, Little Orphan Annie and “Editha’s Burglar”—a skilful throwing together into a hat of the most noxious elements in all three.

If I seem a little hard-boiled about this description of stage childhood, it’s because I’ve been overexposed recently to the bitterness of watching stage children. People who get pleasure from child performances may like seeing little Miss Withers sing and dance and weep forlornly into her spinach. She does it all very competently for a nineyear-old.

AFTER Jane Withers, Charlie Chan’s adventures among opium runners and wharf killers in Shanghai seemed very soothing. It’s fairly exciting because Charlie takes such open risks with some of the worst chflracters in the Orient; and at the same time it’s restful because he’s a serial character and you know nothing can possibly happen to him.

Charlie Chan (Warner Oland) has never been more bland and oriental, in happy contrast to his son, Lee Chan, a Chinese juvenile who calls him “Pop” and behaves like Buddy Rogers in his eager youth. The

opium ringleaders had been active smuggling opium and shooting important people, so Charlie ambles in as usual, quoting his Chinese sages and picking up clues that only a police inspector would overlook. “Charlie Chan in Shanghai” won’t put any great strain on your deductive faculties but it’s entertaining enough.

YOUR APPRECIATION of “Here Comes Cookie” will depend on how long you can stand up under Gracie Allen without beginning to babble yourself. In her latest picture the Allen intelligence operates on a lower and wilder scale than ever. She is the daughter of a rich business man (George Barbier) who turns over his property to her, so that he can ]X)se as a bankrupt, with the result that presently he doesn’t have to pose any more.

As usual, George Burns devotes himself to following Gracie about and feeding her lines, some of them funny, some sounding as though they had been carefully incubated in an old almanac. If you are strong enough to cope with the complexities of Gracie’s simple-mindedness, you will probably enjoy “Here Comes Cookie.”

DR. SOCRATES,” starring Paul Muni, is a combination of small-town comedy and gangster melodrama, the comedy very mild, the melodrama very violent, and both fairly routine. Mr. Muni is an unsuccessful doctor in the picture, a refugee from the profession who spends all his time reading Plato. Won’t take his nose out of The Republic even when the local gangsters are shooting up the town. But Ann Dvorak walks into his life, very beautiful in a strict hitch-hiking tailleur, and changes everything. The

picture is rather awkwardly directed, with long explanations taking the place of action over the initial stretches. Even the sudden spurt of activity toward the end hardly makes up for the long, patiently detailed preliminaries.

She Married Her Boss.—As you may gather from the title, there is nothing particularly new about the plot. But Claudette Colbert freshens it up a great deal with her nice looks, nice clothes and nice comedy. It’s a departmental store comedy, with lots of appeal for the feminine eye. Miss Colbert supplies the appeal for the masculine eye. Recommended.

Broadway Melody of 1936.—A screen revue undertaken by stage and radio professionals. For those who enjoy specialty numbers when done by experts. Eleanor Powell and Robert Taylor.

Big Broadcast of 1936.—More entertainment than you would get in a month of evenings with your radio, though approximately the same kind. With dozens of notables, including Amos ’n’ Andy, Allen and Burns, Ruggles and Boland, etc.

Here’s To Romance. — Nino Martini, Anita Louise and Genevieve Tobin in an operatic film that is more song than romance. But very fine song. Recommended.

Heart’s Desire.—With Richard Tauber. Another magnificent voice. But the story and support are weak.

Midsummer Night’s Dream.—The great Reinhardt production of the Shakespearean fantasy. Shakespeare in a modern medium, and Joe E. Brown, James Cagney, Hugh Herbert and others in a Tudor disguise, and all very impressive. A family film and recommended.

Anna Karenina.—Greta Garbo as the Tolstoyan heroine gives the most beautiful performance of her screen career. With Fredric March and Basil Rathbone. Highly recommended.

The Dark Angel.—War story of a blinded hero, in which everybody concerned — Merle Oberon, Fredric March, Herbert Marshall — works quietly, determinedly and expertly to make you cry. Unless you watch yourself, they may succeed.

The Goose And The Gander.—Divorce, jewel thieves, bedroom mix-ups and farce. With stately Kay Francis awkwardly cast as a naughty minx.

Call Of The Wild.—Free transcription of the Jack London story, featuring Clark Gable and Loretta Young. Clark Gable fits easily into a rough, virile rôle. Loretta Young doesn’t fit at all, but is a pleasure to look at. Good action story. A family film.

Diamond Jim. — Edward Arnold magnificent as the diamond-studded James Brady, first gentleman of Broadway in the ’Nineties.. A historical sketch which everyone should see.

Page Miss Glory.—How a composite of Hollywood beauties turned out to be Marion Davies, with consequences to the nation. As far as this department is concerned, a long, racking head-

Alice Adams.—Katharine Hepburn very fine as the Booth Tarkington small-town heroine, with a heart full of love and a head full of social ambition. Recommended.

China Seas.—Clark Gable and Wallace Beery in a fine, exciting tussle with elemental forces— the sea, typhoons and Jean Harlow. Good melodrama, but not for children. 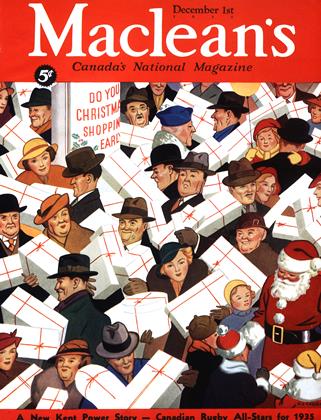