TRANSATLANTIC Tunnel" is so colossal, so filled with energy and crazy purpose and so overwhelmingly technical that the producers, you are likely to feel, might just as well have built the tunnel while they were at it, instead of simply making a picture about it. Probably no producer ever set out to make a film with an idea more fundamentally unsound than this one. But the action at times is so dynamic and the direction and photography so dramatic as to make you forget that the last thing any American President is likely to ask for is direct connection with trouble in Europe. The time is moved forward fifty years, and it is fascinating to observe the clothes we will be wearing, the telephone connections we will be getting, and the motorcars, streamlined like a rocket to the moon, in which we will be whizzing to our appointments in 1985.

Don’t ask me why people should want to reach Europe by tunnel when they can, like the hero (Richard Dix), hop across in an afternoon by plane—the picture doesn’t say. It’s an amazing spectacle just the same, worth seeing if not believing. Walter Huston as the President of the United States, and George Arliss as the British Prime Minister, appear briefly and impressively.

I Live My Life

T LIVE MY LIFE,” starring Joan Craw1 ford, is all about the spoiled heiress who lives not only her own life but the lives of practically everyone inside the cyclone area of her whims and tantrums. Inevitably she meets the poor young eccentric who is able to stand up to her and who finally manages to tame her, though not till after most of the mantel ornaments, vases, potted plants, etc., in her Park Avenue mansion have been shattered by the concussion. Most of us know this plot backward. In this case, however, it is treated with so much hilarity, freshness and farcical violence that it comes out practically brand new.

“I Live My Life” is Joan Crawford’s most successful picture so far. She is handsomer and better dressed than ever in it, and on this occasion hasn’t time to brood

over her emotions; too busy venting them on the family bric-à-brac. Frank Morgan as the father helps the comedy immensely, and so does Brian Aherne as the lover. He is an eccentric young archaeologist, and as he is crazy about working among ruins Miss Crawford, one felt, should be just the wife for him.

'"PHIS IS a pleasant, easy-going comedy-L romance about horse-racing and young love, with Will Rogers taking care of both. In this picture—his last—Will Rogers as usual, allowed half a dozen character actors plenty of opportunity to steal the picture, and, also as usual, none of them took advantage of his generosity.

Bill Robinson is featured as a houseboy who lightens the monotony of housework by tap-dancing, and there are two elderly eccentrics—a rainmaker who exorcises a watertank to provide a muddy track for the big scene at the end, and an old gentleman with a shotgun who is a nuisance to the community and also, it seemed to me, occasionally, to the picture. It’s pleasantly entertaining, however, on the whole. Both the race horse, Greyboy, and young love take a spill or two, but Mr. Rogers manages to get them both righted and on their way before the end. “In Old Kentucky” has the uniquely likable quality of all Will Rogers’s pictures. Rogers admirers can’t afford to miss it.

WE OPERA-TRAINED movie-goers know the backstage or production side of opera by heart by this time, though, the way we are being educated, we are rather badly mixed on our scores. “Metropolitan,” featuring Lawrence Tibbett, follows the customary formula, with a minor story theme leading up to major climaxes of song. The song naturally is superb, and the story is sufficiently lively, thanks to the comedy antics of Alice Brady. She is a producerdiva, so it is mostly rehearsals interrupted by tantrums, all leading up to the usual grand popular success on opening night.

In the meantime we are offered a fine mixed grill of excerpts from “Pagliacci” and “The Barber of Seville,” with the Toreador

number from “Carmen.” (We all knew that one.) Lawrence Tibbett looks less like the conventional movie hero than like an oddly overgrown choir-boy; but his baritone records magnificently, and it is to be hoped that the movie public will encourage him to make more pictures.

KING SOLOMON of Broadway” has nothing to do with patriarchs or polygamy, as the title might suggest. That at least might have been something different. As it is, there isn’t anything in this picture to distinguish it from any of the familiar gangster films which Hollywood story executives can turn out in their sleep and often do.

King Solomon (Edmund Lowe) owns a night club which is presently taken over by a group of Broadway gangsters. A beautiful society girl drifts in looking for trouble, and after that there are the usual snarled telephone messages, muttered negotiations, and a wind-up with everyone blazing away in a remote country lodge. It’s smoothly handled and lively, but the only difference I could see between it and other similar films was that Public Enemy No. 1 left his gun right out on the end table in full view instead of keeping it in his side pocket and pointing to it with the corner of his mouth.

ON PAPER, this must have looked like the scenario writer’s answer to the producer’s prayer. It had a circus background, Wallace Beery and Jackie Cooper teamed up again, and two major climaxes in the animal cage. In addition there was a big fatherand-son crisis in which both stars wept— Jackie with the famous trembling of his lower lip, Wallace Beery with agonized twitchings of his nose.

What they overlooked, unfortunately, was that Jackie is a big boy now, much too big to be crying in front of the camera. Manly tears are all right and so are baby tears, but tears in a rugby-sized lad are apt to be embarrassing to an audience. “O’Shaughnessy’s Boy” is a great big father-and-son banquet of emotion, which just doesn’t manage to be as affecting as it ought to.

The 3!) Steps. — The John Buchan (Lord Tweedsmuir) film about a daring young man (Robert Donat) who decided to save England from her enemies without calling in the police. Expert, exciting and highly recommended for the whole family.

Midsummer Night’s Dream.—Shakespearean poetry, Mendelssohn music, Max Reinhardt direction and every kind of camera magic combine to make this the most important picture of the year. For everyone.

Dr. Socrates.—A slowly-paced, overtalkative picture about a small-town doctor (Paul Muni) who made the mistake of patching up a gangster. Not one of Mr. Muni’s most effective pictures.

Charlie Chan In Shanghai. — Charlie Chan (Warner Oland) potters about in the wake of the opium smugglers, dropping epigrams and picking up clues. Fair entertainment.

Two Sinners.—Otto Kruger and Martha Sleeper get in jail and out again under circumstances of the greatest melancholy. Not recommended.

She Married Her Boss.—The beautiful executive i Claudette Colbert) and her difficulties in separating business and love. Miss Colbert’s expert comedy puts new life into an old theme. Recommended.

Big Broadcast Of 19.3G.—An enormous screen revue almost bursting at the seams with talent, and with a rather strained narrative to hold it together. Amos ’n’ Andy, Ruggles and Boland, Burns and Allen and many others are in it, and you have only to wait for your favorite number to come up. But you may have to wait a long time.

Here’s To Romance.—All about a young singer (Nino Martini) and his difficulties, mostly expressed in song, with his sweetheart, his patroness and his art. Mr. Martini's singing is superb, his acting adequate. Recommended.

Steamboat Round The Bend.—Amusing, easygoing melodrama of the Mississippi, with Will Rogers and Irvin Cobb as competing steamboat captains. A family film.

Diamond Jim.—Edward Arnold as Broadway’s most famous figure in the Nineties. A natural in every sense of the word for Mr. Arnold’s special talents, and a fine description of one of the racier eras of American history. Recommended.

China Seas.—Clark Gable, as the captain of an Oriental trade steamer, is called on to deal with Malay pirates, a typhoon, a mutiny and Jean Harlow in a temper tantrum. Fast, exciting melodrama but not for children.

Dark Angel.—Story of a war-blinded hero, expertly manipulated to make you cry and like it. With Merle Oberon, Herbert Marshall, Fredric March. 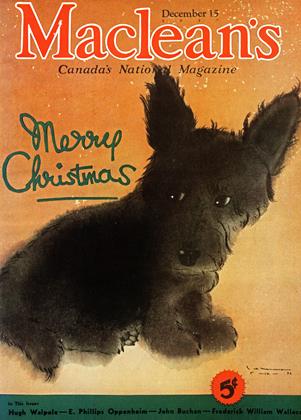