IN “THE PAINTED VEIL” Greta Garbo resumes her endless struggles with love’s vicissitudes. This time she is married to a young doctor (Herbert Marshall) who takes her away from her German country home to live in Hong Kong. Anyone who attempts to set up a lady of Miss Garbo’s special quality in domestic life, especially in the unscrupulous Orient, is asking for trouble; and Mr. Marshall has plenty of it before the picture is over. I íe neglects her and she accepts the consolation offered by a passionate admirer (George Brent). We seem to have met this plot somewhere in the movies before. This time, however, the husband introduces a shade of difference by carrying her off to the cholera district for safe keeping.

Apart from this device and from Miss Garbo herself, there isn’t a great deal in "The Painted Veil” to excite sympathy or surprise. The Garbo manner, however the smothered Garbo ardors, and particularly the unexcelled Garbo face—help to make it a picture worth watching, if not worth remembering. Still we hope the star’s admirers won’t attempt to copy her clothes in this picture. Even Garbo herself can’t keep some of them from looking wildly funny.

THIS IS a fairly good antidote after the love, jealousy and cholera morbus of "The Painted Veil.” It’s a combination of Victor Herbert, scrambled Mother Goose, scrambled Laurel and Hardy, and toy nightmare the sort of thing an imaginative child might dream, falling asleep after too many Christmas excitements and indigestibles. Laurel and Hardy do a great deal for it, their comedy helping to bring it up to adult level and their particular combination of brothers-in-arms loyalty and babes-in arms innocence working nicely into nursery dramatics. If you don't care for Laurel and Hardy, however, the doings of the Three Little Pigs, and the love affair between Bo-Peep and Tom-Tom the Piper’s Son w'on’t excite you much.

EVERYBODY, I think, must have wept at “The Little Minister,” including the ushers. Hardened movie-goers sniffed and blew their noses, and weak sentimentalists just broke down and had a good cry; especially in the scene where Dr. McQueen and the Little Minister come to take Old Nannie to the poorhouse and Babbie (Katharine Hepburn) interposes to save her. No matter how case-hardened you may be, this scene is

pret tv sure to affect you—and I speak as one who has looked on coldly dozens of times in the past while old ladies were being led away to the movie poorhouse.

The picture itself is beautifully acted, everyone from Miss Hepburn down seeming to be fused and melted perfectly into the Barrie mood. It flattens out a little, however, toward the end, and the scene where Babbie prays in close-up for Gavin’s recovery while the three crabbed church elders stand awed and repentant in the background, isn’t as impressive as it might have been; prayer in close-up being one of the things that keep squeamish people away from the movies. It was the Hollywood touch turning up unluckily at the last moment, and even Katharine Hepburn couldn’t make it seem quite right or very moving. “The Little Minister” is good three-quarters or even seven-eighths of the way through, however, and should help to keep Miss Hepburn among the dozen most popular players; perhaps even to advance her a notch or two.

ONE SHUDDERS to think what “Bright Eyes” would be like if it didn’t have Shirley Temple to take the curse off. The picture is a shameless tear-jerker. First, Shirley’s father is killed in an airplane crash and we have Shirley sending messages to him in heaven at her prayers. Then her mother is killed in a motor accident and, just to put the screws on, the birthday cake she is carrying for Shirley is squashed flat. Shirley goes to live with a proud, cold pair who make her play with their little daughter, Joyce—an infant paranoiac who likes to pull the arms, legs and heads off dolls.

against. It would be going too far to suggest that little Miss Temple makes the story convincing, but she does make it endurable and even at moments pleasureable, frolicking obligingly through the picture’s grimmer moments as though it were a game devised for her by well-meaning but not particularly sensible adults—which, in fact, it is.

ORDINARILY Wallace Beery is our favorite movie hero and we wouldn’t exchange him for all the Clark Gables, John Gilberts and Baby Leroys in Hollywood. But in “The Mighty Barnum” he seems a little miscast. His large, innocent, Jumbolike personality doesn’t quite fit into the Barnum legend of showmanship and wild energy. Adolphe Menjou, as the Bailey of the Barnum and Bailey partnership, has a much less exacting assignment. If Barnum was the first Wise Guy of America, Bailey was the original forgotten man; so that in “The Mighty Barnum” the versatile Mr. Menjou has a chance for lively invention and makes the most of it.

Virginia Bruce is in the picture, too, as Jenny Lind, the Swedish nightingale—very blonde and beautiful, but a little more diffident about her coloratura than a professional nightingale should be. “The Mighty Barnum” is a series of anecdotes, more or less authentic, in the life of the American hero, well written and interestingly set forth.

Music in the Air

EVERY YEAR Gloria Swanson makes a triumphant return to the screen, then disappears completely until the next year, when it is time to return triumphantly once more. This time she is in “Music in the

The story is about a pair of Bavarian lovers who go to Munich and become involved, the one with a popular librettist (John Boles), the other with a musical comedy diva (Gloria Swanson). The Kern music is tuneful and gay, the story bright and not too involved. Miss Swanson provides comedy and song, wears some interesting clothes, and seems in general to show considerable screen promise. 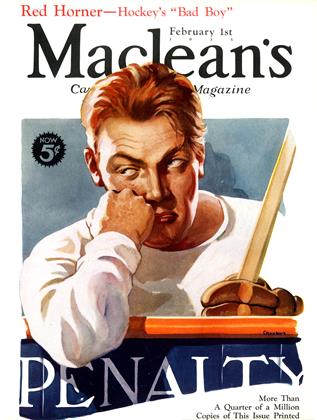