WHEN 25,000 Vancouver voters filed into the poling booths a few months ago and gave the biggest majority in the city's history to Gerald G McGeer, a good many of them crossed their fingers, whistled cheerfully and hoped for the best. They weren’t very sure what they were getting. It: was just a little bit like buying a pig in a poke.

Of course, they knew a good deal about Gerry McGeer; who didn’t? A few of them remembered him as a small, redfaced boy delivering milk from his father’s dairy. Others recalled Gerry as the fiery labor-hall orator or. in his later days, as advocate and provincial legislator. But there was no way of telling what sort of a mayor he would make. It was to be Gerry’s first test in an administrative job.

But they didn’t have long to wait for at least an indication. That’s one thing about Gerry McGeer; he doesn’t believe in keeping [xxjple in sus|X‘nse. He is for action, as direct as ]x)ssible and preferably dramatic,. He hadn’t been in office for more than a week before he had:

1. Fired the chief of police and several of his satellites.

2. Obtained the dismissal of both police magistrates.

3. Announced a plan for reduction in the city’s debt by slashing bond interest fifty per cent.

4. Declared war on all forms of gambling, and confiscated a thousand slot machines.

5. Issued a proclamation declaring the first Sunday after his inauguration to be a day of ‘‘service, humiliation and prayer.”

These events made a reasonably full week even for Mayor McGeer, but he took them all in his stride and was surprised that anyone should be startled by his speed.

Unlike his predecessor in office, the venerable L. D. Taylor,

He is too much of a realist to trust to luck or fate.

“I was elected for a definite purpose,” said Gerry as he smiled across his new desk in the city hall.

“My friends put me in here to clean up the city and put its house in order. That’s exactly what I’m trying to do.”

He’s a big, broad-shouldered man of forty-seven, this Gerry McGeer. Powerfully built, he first developed his physique as a worker in an iron foundry, but now he keeps in trim and his poundage down by wrestling, road-work and handball. His is a typical Irish fighting face—flashing black eyes, uptilted nose, jutting jaw, broad, mobile mouth, and jet-black hair slicked down across his high, wide forehead. He knows everyone in Vancouver and everyone knows him—even the newspapers refer to him as plain Gerry in their headlines— and yet he is too much of a lone crusader to make many close friends. Those who know him best say it’s because he is fix) absorbed in winning his battles to be consistently tactful.

He defied precedent and political tradition by appointing as chief of police an outstanding Conservative— Gerry is a lifelong Grit. The appointee had a good war record and was famous as a mountain climber, but his police experience was nil. That, however, did not concern Mayor McGeer. “The. city wants someone who is honest and willing to give intelligent service,” he explained; and that was that.

WHEN HE put through the first meeting of his city council a resolution favoring fifty per cent reduction in interest, he was charged as a violator of the city's honor, as a defaulter seeking the ruin of Vancouver through repudiation. But he merely arched his eyebrows while his critics stormed.

“Why, I’ve only just started.” he warned them. “Reduction in interest might start in Vancouver, but it certainly won’t end here. Personally I’m going to see that the issue is made not only a provincial but a national one. What’s the use of putting out the fire in the parlor while it rages in the kitchen? Interest reduction will be in national politics along with banking reform and my other theories. Just wait and see.”

And those who know Gerry McGeer’s way of doing things think the wait won’t be for long.

McGeer is one of the most prodigious figures who ever crossed the threshold of municipal life in Canada; an amazing mixture of thick-skinned politician, nimble-witted debater, untiring student of economics and evangelist, possessing among his other characteristics an almost matchless gift for showmanship.

McGeer is not a newcomer to the national scene. He has argued his favorite topic of credit reform from coast to coast, and in Montreal, Toronto and Ottawa he has often appeared as a champion of better terms for British Columbia, chiefly in the matter of lower freight rates. Prairie students of economics are familiar with his monetary programme, which, in brief, would bring about national control over credit and remove the country's financial domination from the hands of private bankers.

Although bom in Winnipeg, Gerry went to British Columbia with his family as a very young lad. Ilis father, the late Jim McGeer. who once worked with “Tay Pay” O’Connor and was regarded as a party oracle, gave (Jerry his love of combat and his flair for politics. The elder McGeer farmed

for a while in the Fraser River valley, but both he and his son tired of that. Gerry felt more at home in the iron foundry where he was employed several years. He joined the molders’ union, represented the union at labor meetings, aspired to a political career and, believing that the shortest route to that was via the law, worked his way through Dalhousie University and got his degree. In 1916, back in B. C. again, a supremely confident young lawyer of twentyeight years, he rode into the legislature on the tidal wave that swept the Liberals into power.

“I was a pretty raw product in those days," Mayor McGeer recalls. “I depended chiefly on my nerve and my wits and my sense of humor.” But these were valuable assets and Gerry made the most of them. In the house “the youthful Member for Richmond,” as Billy Bowser, the Tory leader, contemptuously used to describe him, offset his lack of parliamentary polish with sheer audacity. But he made a good impression, especially on “Honest John” Oliver, the Premier, who pretty soon had a very big job for him.

Oliver, studying B.C.’s economic problems, visualized a picture that simply didn’t make sense. A large proportion of prairie wheat that, for geographical reasons, should be flowing west for export, was being shipped east. The reason was high freight rates. Oliver, the wise old farmer who packed more constitutional law into his grey head than the average K.C., enlisted McGeer’s aid as counsel and, together like Don Quixote and Sancho Panza from the West, they jousted with the windmills of rail tariffs. Unlike the characters of Cervantes’ classic, they won. And in the flush of victory Gerry presented his bill for more than £150,000, which in itself indicated that the young lawyer was getting on in the world.

The freight-rates battle over, Gerry looked for other giants to slay. The monster soon appeared : Mammon. But before tackling it Gerry went into intensive training. He absorbed all the knowledge available on finance, economics and the science of government. He emerged from his months of concentrated study with a plan for managed currency and credit reform. Then followed months of missionary work. He toured the country, spoke wherever he could get a hearing.

It soon became obvious to him that to get anywhere with his plan he would have to reenter politics and take it with him. He won the Liberal nomination for Burrard, was elected by a thumping majority. No longer the raw political recruit, he proceeded to dominate the Legislature with his smooth eloquence and complete mastery of his issue. When the house endorsed his resolution for a national bank, nationally owned and controlled, he had gained an important stronghold in his general offensive for economic reform.

The Vancouver mayoralty came next. Twenty-five thousand of a total of 35,000 votes cast were for Gerry, indicating that Vancouver, conscious of his faults as well as his virtues, was pretty solidly for him. The citadels of Ottawa appear to be the next in his line of march, and already a Dominion nomination has been offered him. He knows that the issues he feels most keenly about—financial reform, banking reorganization, currency changes, debt refunding and so on— are national; that the only decisive action possible toward them is within the Dominion sphere.

Where he will land, no one can foretell. He’s a new kind of bird in Canadian politics. His approach to the economic problem is that of the tub-thumping evangelist who believes in a personal devil. Just now his favorite devils are the gold standard and what he calls the international banker. He’s quite sincere about them but is much t(x> good a politician co forget that devil-baiting wins votes.

Just being mayor of Canada’s third city—in population, note Winnipeg readers—engages most of McGeer’s time at present, and Gerry is not the type to make it a sinecure. But he has a boundless ambition, an energy that exasjx'ratcs all but himself, and is afraid of no man or circumstance.

“One thing you can’t help liking about him." said one who is continually in conflict with McGeer’s policies, “is that once he’s made up his mind to do a thing there’s nothing on earth that will stop him.”

Gerry makes his own amendment: “The only fights I

ever lost were due to my own mistakes.” 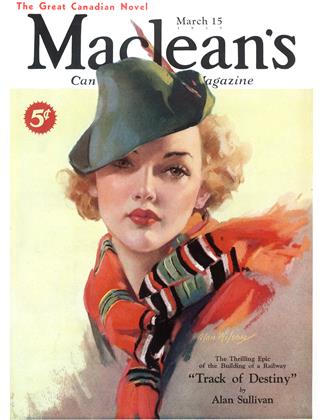