"The Scarlet Pimpernel,” British pictures continue to put their best foot forward. A great many gifted people have contributed to the success of this exciting film—Alexander Korda, who handles his historical material in his usual magnificent style; Leslie Howard who plays the title rôle; Merle Oberon who is chiefly required to be beautiful and hasn’t any trouble with the assignment; and finally, Baroness Orczy, who contributed the story. The major honors. I felt, went to the baroness, but this may be because I have a childish preference for a narrative that holds me on the edge of my seat, pop-eyed with excitement.

However, there are plenty of other things besides suspense to give pleasure in “The Scarlet Pimpernel’’—notably Ernest Milton’s performance as Robespierre, the glimpse of busy knitters around the guillotine, and the Prince Regent’s levée, with Leslie Howard contributing elegant observations on the art of gentlemen’s dress. On second thought, it may have been Leslie Howard’s performance that was chiefly responsible for the high quality of “The Scarlet Pimpernel.” Certainly he brought the eighteenth century to life in a way to make you forget completely, for the time being. +he disagreeable realities of the twentieth. And that, principally, is what the movies are for.

A LOT OF people round me seemed to be enjoying themselves heartily at “Sweet Music,” the Warner Brothers’ radio romance, starring Rudy Vallee. So perhaps it was my fault that the romance seemed pointless and the melodies mediocre. The story, which has to do with radio-advertising programmes, makes that branch of our civilization, which sometimes seems interestingly mad when it comes over the air. appear depressingly nitwitted as it was revealed behind the scenes.

The Rudy Vallee lyric programme, however, is the main feature of the picture; the story coming in as a sort of intermittent interference. “Here’s a new little thought for a lyric,” Mr. Vallee would say pleasantly, lifting his baton; and it always seemed, except for the title, exactly like the last little thought. On the whole, “Sweet Music” offers about as much fun as an evening at home with the radio. Except that you can’t play bridge.

THIS BRINGS US Paul Muni as halfcaste Johnny Ramirez, deep in trouble with problems of sex and society. Having educated himself at terrific labor to be a lawyer, the hero discovers that the highclass society at which he aims won’t accept him, and so reverts to the gutter, which is only too ready to welcome him. There are

no prejudices, either social or moral, in the Mexican bordertown; and when one of the Mexicali matrons (Bette Davis) decides she wants Johnny, she clears the way by shutting her drunken husband up in the garage with the engine running—a “little thought,” as Rudy Vallee would say, which is rather dangerous to leave lying around.

The rôle of Johnny is one of those tense, slightly overwrought characterizations in which Paul Muni excels. Bette Davis, who started out as the gentlest of Hollywood blondes and who has come to represent Woman-trouble on the screen in its most unpleasant form, plays the part of the monoxide murderess. “Bordertown” isn’t, as you may gather, a picture for little children.

THE SCREEN version of “David Copperfield” has all the members of the older generation sitting about dewy-eyed, reminiscing about childhood and Dickens, and how they used to take “David Copperfield” to bed with them and sneak the light on again, to read when they were supposed to be asleep. It happens to be true, too. Half the middle-aged people who go about today wearing glasses with double-strength vision owre their weak eyesight to reading the fine print of Dickens literature by gas illumination.

When a work of fiction means as much as that to a whole generation, the screen version can’t be just good, it has to be perfect. And “David Copperfield” is perfect, loyal not only to the spirit but to the letter of Dickens. The picture, you will remember, was held up for months while the producers scouted for a possible David. I don’t know where they discovered Master Freddie Bartholomew finally, but he looks as though they had picked him straight out of the past or cut him out of a Cruikshank illustration. The rest are just as good in their own fashion —or more strictly in the Dickens fashion— especially W. C. Fields as Micawber and Edna May Oliver as Betsy Trotwood.

Possibly the young people who are hustled off to “David Copperfield” by enthusiastic parents won’t be quite so excited about the picture as their elders. Even so, they will probably enjoy it a lot more than they expected to.

“Ruggles of Red Gap” is rather rough and ready comedy, designed to draw loud sudden laughs from the unthinking. As Ruggles, the formal English valet set down in rough America, Laughton turns the picture into comedy for what we proudly call the adult mind; without in the least spoiling the fun for the unthinking. Mr. Laughton has been so busy playing screen monsters—Nero, Henry VIII, and the awful Pa-pa of the Barrett family—that one hadn’t thought of him as a comedian; especially the sort of comedian who can draw loud guffaws and smiles of thoughtful appreciation from the same audience. With Roland Young, Zasu Pitts, Charles Ruggles and Mary Boland in the cast as well, and a sound, if stock, comedy idea to work on, “Ruggles of Red Gap” is a picture to give pleasure to almost everyone.

The March of Time

THE MARCH OF TIME” is an experimental feature introduced by Time magazine, and represents a new way of handling the much abused newsreel. It takes current events, gathered from daily papers as well as newsreels, organizes and dramatizes them and, substituting actors when necessary for actual participants, presents them as they

would be if camera-men were both inspired and ubiquitous. Thus, in the first issue we are presented with the actual operation of a speak-easy, some aspects of the Japanese war situation, and the problem of the French war debt, more o less from the inside.

Convincing and apparently highly workable, “The March of Time” manages to do for the present and the actual, what the other programme features do for the past and the fictitious, besides supplementing the actual newsreel in a highly satisfactory way.

The Gilded Lily.—All about how the arts of publicity, plus the wiles of Miss Claudette Colbert, led to fame, riches and true love. Gay and diverting, with Miss Colbert in her best mood.

Sweet Adeline.—Since nothing is left to say about the Nineties, and nothing left to do about screen musi-comedy, Warner Brothers had the inspiration of combining the two, with better results than you might imagine. With Irene Dunne.

Clive of India.—More historical dramatization, this time with Ronald Colman, slightly overwrought, in the title rôle. Chiefly interesting for its high moments, notably the Battle of Plassey, the picture shows the lack of a wellknit narrative. A family picture.

Biography of a Bachelor Girl.—The Ina Claire stage comedy transferred to the screen, with Ann Harding featured. Though better than average, the screen version lacks rather noticeably the sparkle of the original.

The Captain Hates The Sea.—A “Grand Hotel” plot, with the story as well as the characters pretty much all at sea. Better arrive at the beginning if you want to get your bearings. Fairly interesting.

Imitation of Life.—How pancake flour led to success and true love, together with some aspects of the color problem. Claudette Colbert. success story which will be of particular interest to women.

Wings in The Dark.—Aviation on its romantic side; with some glimpses of the more technical problems of a flyer’s life. Myrna Loy, Cary Grant. A fairly exciting picture.

The Painted Veil.—Greta Garbo in a tale of love complicated by plague in China. As usual. Miss Garbo seems more important than her story.

Forsaking All Others.—Clark Gable, Joan Crawford and Robert Montgomery in a series of pranks, which include spankings, accidents, tumble in a pigpen, and finally matrimony. Not highly recommended.

Romance in Manhattan.—Francis Lederer and Ginger Rogers in a rather routine idyll of love in the depression.

My Old Dutch.—English picture, which gives long and circumstantial account of love among the humbler classes. For those who enjoy Cockney humor and sentiment.

Evensong.—Career of an opera singer (Evelyn Laye i tracing the rise to fame, the period of archdukes, diamonds and roses, and the final stage of wrinkles, disillusionment and flat topnotes. Believable, but a little depressing. 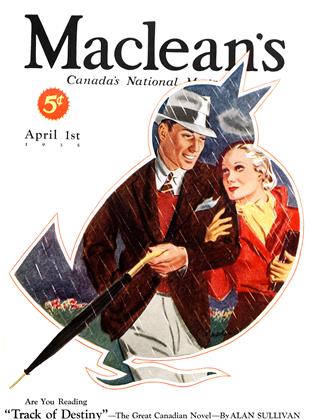