LES MISERABLES” should have almost as good a run for the producer’s money as “David Copperfield.” Like the latter, it is a universal classic, with rich parts for everyone and an especially large helping for the principals—Fredric March as Jean Valjean and Charles Laughton as Inspector Javert.

At first the part oí Jean Valjean. the exconvict, seemed a little too rugged for Mr. March, who can’t be made ferocious-looking even with the best rags, matted wigs and property whiskers that Hollywood can provide. As M. Madeleine, however—the regenerated Valjean— he gave a performance of extraordinary power, intensity and tenderness; while Charles Laughton’s Inspector Javert was everything one could hope for by way of icy malice.

“Les Miserables” is an exalted sleuth drama, both intensely exciting and deeply impressive. Reading night and day and not letting oneself off any of the descriptive chapters, one might get through the lxx>k in two or three weeks. The film version runs a little over an hour and a half. People who couldn’t get through the story once will want to see the picture twice.

TT SEEMS to be the rule that material never intended for the movies such as “Les Miserables,” “David Copperfield” and Victor Herbert’s “Naughty Marietta,” is infinitely better adapted to the screen than anything Hollywood can think up for itself. “Naughty Marietta’’ bears about the same relation to ordinary screen musical shows as “Les Miserables” does to the average screen story. It has a charming musical score perfectly balanced by a lively romantic story. And when Jeanette MacDonald and Nelson Eddy go into their special numbers you are able to sit back and enjoy your money’s worth up to, and even considerably beyond, its limit.

We are accustomed to Miss MacDonald by now and can’t be sufficiently grateful for her. But Nelson Eddy is something new. Mr. Eddy is magnificent to look at and listen to. and can put more vitality into a song than all the crooners of Radioland and Hollywood could sap out of it—which is saying a lot.

Loves of a Dictator

THERE IS considerable to be said for getting our history’ from the screen. Certainly, without the movies, few of us would ever have heard of the remarkable

when I first went to see him. The rising heat of a small stove penetrated the roof without warming the room, and the melting snow trickled through the ceiling; other marks showed that this was a frequent occurrence in milder weather. A chilling atmosphere arose from the floor, due to the fact that Tony had dug a cellar into which the melting snow and surrounding moisture drained, making the house always damp; wind and snow came through the chinks of the walls where the cheap lumber had warped, and the corrugated cardboard had become sodden. All Tony’s ingenuity to cope with such things was without avail, and Mrs. Tony said that when she was in bed. the wall against which she slept was so cold that it made her feel she would never get warm again.

ALTHOUGH ten years had passed since the permit was issued, no building inspector had called to ascertain whether the “shed” was on a concrete foundation or if it was fit to be used or. indeed, was being used, as a dwelling.

Tony said, laughing at his joke:

Dr. Struensee who, in the eighteenth century took control of the kingdom of Christian VII ol Denmark, seduced his queen, instituted reforms which still exist, and was finally put to death, as much for his virtues as for his sins.

“Loves of a Dictator” may remind you both of “Power” and of "Catherine the Great,” partly because of the habit directors have of borrowing from each other and partly because historical characters tend to copy each other’s bad behavior. It features Clive Brook, whose talents, though hardly flashy enough for dictatorship, are dependable and authoritative. It is excellent textbook entertainment.

The Devil is a Woman

; I TIERE HAS BEEN a gx)d deal of discussion as to whether or not the fault is Joseph von Sternberg’s that Marlene Dietrich isn’t a better actress. After seeing “The Devil is a Woman,” one is largely convinced that the fault is Miss Dietrich’s. In this picture Director von Sternberg lets her have her picture pretty much to herself; and after watching her pout, stamp, coax and even talk baby-talk for the greater part of an hour and a half, one was all for returning her to Mr. von Sternberg’s hypnotic keeping. She is a Spanish charmer, and her story is related by a discarded lover (Lionel At will) to his friend (Caesar Romero), who is also her latest conquest. The friend swears he will stay away from her, goes to see her next morning, and is instantly infatuated.

It all sounds rather like a serious parody on a Mae West picture. In the end she deserts her new lover to return to the old, lying wounded in hospital for her sake. Whether she returns for love, for money, or for honor’s sake, no one can tell, least of all, one felt. Miss Dietrich or Director von Sternberg. Von Sternberg has worked a great deal of excitement, both dramatic and photographic, into his carnival scenes, and

Miss Dietrich herself is so extraordinarily beautiful and such a pleasure to watch that, even with all the evidence in, it is still possible to think of her as a fascinating actress.

STAR OF MIDNIGHT” is one of those fast, post-Thin-Man murder mysteries which you will have to see twice to unravel properly. Even at that I’m not sure you could unravel it; or that it is worth seeing twice. It's about the murder of a New York gossip columnist who knew t(X) much about another murder: together with a masked mystery woman who knew so much she thought it safer to stay right out of the picture. That’s about as simple as I can make it.

There’s a great deal of wisecracking, cocktail drinking and sitting up till all hours in apartments so modernistic that you can’t tell the furniture from the decorations. William Powell gives one of his smooth and ready performances as an amateur detective; and Ginger Rogers is charming in an ermine bolero which she wears at all hours, even, apparently, to bed.

HOWEVER you may feel about “Black Fury,” you are likely to remember it longer and more vividly than any other picture of the year. It is the story of a strike in the Pennsylvania coal fields. The strike is caused not by the oppressiveness of the mine owners nor the sufferings of the workers, but by the activities of a gang of strikebreaking racketeers. The trick, as far as the audience is concerned, is not to take sides. Warner Brothers obviously didn’t. They wanted to make a picture of a coal miners’ strike because it is obviously such violently dramatic movie material ; and they avoided the sociological issue the best way they could. The result is a manipulated story which

still contains some of the most bitterly effective scenes I have ever seen screened, together with a superb performance by Paul Mutai as a “hunky” miner who is used as cat’s-paw by the gangster strikebreakers. Much of “Black Fury” is as vivid and contemporary as one of those incendiary newsreels that very occasionally get by the censor. Regarded as a sociological explanation, it is pretty nonsensical. But looked on simply as a story, it is vivid, exciting and brilliantly dramatic. 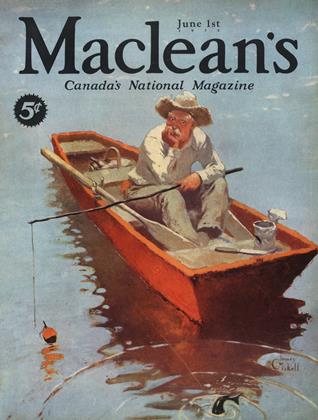