AT LEAST one Canadian National conductor can make himself understood when he roars “A-l-l-a-b-o-a-r-d” the full length of the station platform in Saint John, N.B.

Recently from the express air of a train, a small, wiremeshed container of domestic bees was placed on a platform transport, waiting to be shipped to Prince Edward Island. It had come from sunny Alabama. Thousands of bees clustered inside. A few hundred, grouped on the outside, left the artificial hive to have a spin about the crowded platform.

Truckmen were busy shifting express from one train to another. Passengers walked leisurely about, waiting for the departure. Warm sun filtered on the improvised hive and suddenly—action ! The “outsiders” began to buzz about the promenade among the people, just looking things over. Time for a wing stretch anyway. The last exercise they had had was in Boston. More than one traveller waved his hands to ward off the buzzers; but they didn’t waste any time on Canadian stings. They were just looking around.

All the express was loaded. Passengers began to climb into the coaches. Out came the conductor’s watch—“all aboard”—in his best drawl. Along the platform swooped a thin line of bees, headed for the express car. As the train moved out, all were snugly settled on the outside of the little cage—on their last lap.

“They’ve been doing that at each stop from Alabama,” an expressman laughed. “The Boston express chief told me.”

Dr. Dafoe may be surprised to hear it, but his precious charges, the five little Dionnes, have been spirited away to Montreal. And, incredible as it may seem, in the face of the almost superhuman care they have enjoyed since their miraculous birth, they are keeping company with men and women of the direst histories, men and women who will do their impressionable infant minds no good. To be shepherded by Queen Victoria and Sir Wilfrid Laurier is one thing, but to be closeted in the same house with Jack the Ripper, Dr. Crippen, Dillinger, and Madame F., the female strangler, can surely bode nothing but ill. Yet, and this, too, will surprise him, Dr. Dafoe has gone to Montreal with his quintuplets, and Mamma and Papa Dionne are along, so perhaps they are not in such a desperate plight, after all.

The plain truth of the matter is, the celebrated family has become domiciled in Montreal’s famous waxworks, the Musée Eden, on St. Lawrence Boulevard, or, as it is better known. “The Main.”

The Musée Eden has been going for forty-two years, but with ten-cent movies a few doors away, times are not so happy now for waxworks, in spite of a spirit enterprising enough to gather in the quintuplets. I was the sole, the solitary, the unique visitor the evening I went down the stairs.

The stout proprietor threw down his paper, jumped up— went into his glass case and sold me a ticket for thirty cents. He tore it in half and came out to watch me drop my half in a receptacle, just like a picture show. He turned on the lights, gave me a wave of the hand, a short, gabbling lecture, and left me free to roam the alleys of his ghastly basement.

I went down the main aisle and came full upon the Judgment of Solomon. The soldier has the baby by the heel and is about to divide it with his sword. Solomon in all his glory was never arrayed like this Solomon, who looks on so indifferently !

This is only the beginning of the babies at the Musée Eden. There is, for good measure, Madame de Vinci, the mother of sixty-two children, all alive when she went to her reward. There is no attempt to reproduce the sixty-two offspring. Not far away, is Margaret Roth, the twelve-yearold mother, of Sydney, Australia, with her infant. To pay your respects to her, you have to run the gauntlet of Queen Victoria, Sir Wilfrid Laurier, and one of the popes. The Queen is dressed something like a nun, in a sort of bathrobe, and is wearing a cerise something or other over her head. And the only way you can identify Laurier is by his flowing locks.

The Dionnes live next door to Snyder and Gray. The murderous weapon is uplifted, for ever the gruesome crime is being enacted, but the Dionnes are happily indifferent. The mother, as young, pretty, radiant as if she had just stepped out of a shop window, lies in bed, and four of the quintuplets are scattered over the pillow. The other quintuplet is precariously dangling from the fingers of the nurse. Oliva Dionne, properly labelled, in a fresh grey shirt, sits stiffly and lumpily in his chair, looking, if anything, a little piqued; and the good doctor, much more haggard than the papers would have us believe, waits anxiously by the bedside.

Bruno Hauptmann is there, too, condemned long before he came to trial, as the kidnapper and murderer of the Lindbergh child. In the same cell were the McDonalds whoever they might be, with their victim stretched dead and bloody at their feet; and the late Mr. Dillinger, straw hat and glasses, cigar in the corner of his mouth, as dapper as a drummer for ladies’ wear.

Jack the Ripper stands ferocious in the midst of a simple kitchen scene, with innocent eggs and milk on top of the table, and two dead women compactly laid out under it, side by side. The ghastliest exhibit was probably “Les Trois Pendus,” three men in striped pyjamas hanging from three nooses, for some obscure crime down in New Orleans.

“Don’t you ever have bad dreams?” I asked the proprietor, but he said he was used to it.

I was amazed to see that, in spite of all the first class criminals we have produced of late years. Dr. Crippen still holds his own. It costs ten cents extra to see Dr. Crippen and, with him, the two-headed girl. What was there about Dr. Crippen that made him so fascinating?

But it must not be thought for a moment that there is any glorification of crime. On the contrary, the museum is plastered with signs in two languages. “Crime Does Not Pay.” and the chamber of horrors is offset by—well, people like the Dionnes and Queen Victoria and the mother of sixtytwo—and by idyllic little scenes of boys returning to the old Quebec homestead.

After all the horrors, my greatest shock was to find Louis Riel crammed into a prison cell with Leopold and Loeb, Hickman and several other murderers. That this should happen in Montreal, of all cities!

The Dominion Bureau of Statistics, in its weekly trade reports, generally manages to work in a paragraph which sends us into a prolonged bout of meditation.

For instance, we are fascinated by the announcement that

during the fiscal year 1934-35, Canada imported sausage skins to the value of $1,094,920. Most of them came from New Zealand. In the one month of March this year that little country sent us $103,970 worth. The previous year, we bought only $629,132 worth of sausage skins. There’s an increase of $465,788 in twelve months, representing millions and millions of sausages. And a natural increase, without a single National Eat-a-Sausage Week. We are just sausage conscious, that’s all.

Our sympathy goes out to the society editors of daily newspapers. The complete English vocabulary contains so few variations in bridal phraseology that headings over announcements and accounts of weddings are, of necessity, deadly monotonous. Think of the rapturous expression on the faces of society editors on reading this item, wired by the Canadian Press from Edmonton:

“It was an event for one family when it celebrated a wedding. A laconic police report read: ‘Everything in the house had been smashed before we arrived, and the family had gone to bed when there was nothing left to smash.’ ”

A letter published by a London (England) daily paper has caused an epidemic of girlish giggling in Montreal. Said the correspondent :

“I am just over forty, and am developing, in my wife's opinion, an unsightly curve. Her father, who is paying us a visit from Montreal, surprised us by his youthful figure, which he attributes to his ‘belt.’ He says that in Montreal practically every well-dressed man wears corsets.”

Montreal Star Investigator Perks has been checking up.

A leading feminine corsetière said: “Certainly. We sell quite a lot of corsets to gentlemen.”

The head of another corset firm said: “Yes, we sell corsets to gentlemen. But our trade in Montreal, is not very big, mainly because we have no male corsetiers to fit them on. A lot of gentlemen are quite nervous at the idea of having a lady measure them and fit them with corsets, But still, we do sell quite a few.”

Tailors were shy and not inclined to admit that their clients wore ’em. But Mr. Perks offsets this by pointing out the large sale of “reducing belts” which, he avers, in general principles, differ but slightly from foundation garments worn by a large proportion of the fair sex.

Thanking Mr. Perks for the tip, we are now engaged in a survey of Toronto. 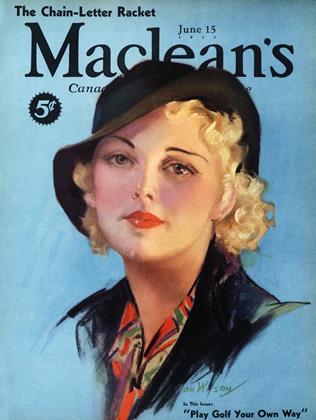