DOES CANADA’S 400th birthday fall on August 13 of this year?

It does if we date our national age from the day when the name of our country was first heard by a white man. This day in August will be the 400th anniversary of the day on which the Indians gave us a word that has become the name for our country.

“Canada” has become an international word. Constant familiarity has made it such a part of our tongue that we are prone to forget at one time it belonged to the Red Man only and that it had echoed across lakes and through primeval forests for hundreds of years before the white man came to these shores.

The famous French explorer, Jacques Cartier, was the man of the white race first to hear its musical syllables and to introduce it to Europeans, in the faithful narrative he kept of his voyages.

Having heard it, Cartier reported the occurrence in his “Voyages.” This journal provides us with a brief written record of the incident, enabling us to date the adoption of the word into the language of Europeans so exactly.

Four hundred years ago, Cartier set out to the New World to carry on the explorations which he had commenced a year before.

On his previous voyage, he had touched at various points along the coast. Now he proposed to explore more inland where he might find the shorter way to China, which was the ambition of most early explorers.

The year before he had visited Gaspé. There Cartier lured two Indians aboard his ship. Too late, they found themselves captives bound for France to be exhibited to the king as types of the race inhabiting the New World.

On May 19, 1535, the fleet left France for the second voyage. On the Grand Hermine was Cartier with the two Indian captives bound home in the rôle of guides and interpreters to the voyageurs.

Strong winds caused the boats of this fleet to separate, but all met safely in July at their rendezvous at the mouth of the St. Lawrence River.

Rested from their tedious ocean journey, the party started westward up the river. Unfavorable weather delayed them at anchorage at Pillage Bay for a few days of August.

Friday the thirteenth, despite superstition, dawned bright and clear, with promise of ideal Canadian midsummer weather. The explorer moved on, crossing the northern channel of the river till he arrived at the west point of Anticosti Island.

Here was happiness for the Indian captives. Any doubts they might have had of the possibility of seeing their hunting lands again now vanished when they recognized native country. Exile was over. Friends were near. One can imagine the joy of these Indians as they eagerly pointed out familiar land each to the other and explained to Cartier their position as they so well knew it.

Cartier listened, and at that moment was the first white man to hear the word that eventually came to be the name by which our country is known to the far corners of the earth. Of that day he wrote:

“On the 13th of the month (August) we set out from St. Lawrence’s Bay (now Pillage Bay) and headed toward the west, made our wray as far as the cape on the south side (west point of Anticosti Island) . . . and it was told us by the two Indians we had captured on our first voyage that this cape formed part of the land on the south which was an island (Anticosti); and that to the south of it lay the route from Honguedo (Gaspé), where we had seized them on our first voyage, to Canada; and that two days journey from this cape and island, began the Kingdom of the Saguenay, on the north shore as one made one’s way to this Canada.”

Did any prophetic wave of emotion move Cartier as he caught this word from Indian lips for the first time? His records unfortunately do not tell us.

He was an explorer. Daily he was learning new placenames irom the Indians. Here was another. Probably “this Canada” beyond in the wilderness was just another location for him to visit as soon as possible, that he might make record of his observations in his writings and on his maps, thereby charting and making known one more place in the new land, then cloaked in complete mystery.

Casually it was included in his narrative— just an item in a day of a busy life.

AMONG the Indian tribes, Cartier was ■to find that Canada was the word generally used to mean “town” or “settlement.” In his glossary of Indian terms, he put Canada undagneny as meaning “From which town do you come?” The old Mohawk word for “castle” or “stronghold” was Canadaghi. The Iroquois word for “settlement” was Kannata.

But the Indians also used the word to designate one particular geographical location—that region along the St. Lawrence River from Grosse Island on the east to a point between Quebec and Three Rivers. In this part of the New World, settlement was first made by the French. The beauty of the Indian name for the district must have appealed to the French pioneers, for

they accepted it as their own without change.

Various explanations have been offered as to the original meaning of the word “Canada.” One of the earlier attempts, in the eighteenth century, suggested that Spanish explorers had been first in the district looking for gold and, finding none, would exclaim Acá nada—meaning “nothing here”—which the Indians heard and repeated to the first of the French, who in turn took it as their name for the country.

For more than 200 years, “Canada” continued as the name for the St. Lawrence district just as “Acadia” was the name for the Maritime territories. In those days the boundaries of the two districts were not clearly defined. When later the French and English strove for mastery in the New World, this indefiniteness of the limits of the two districts became a cause for war between the two nations.

After the fall of Quebec when both dis-

tricts came under the rule of one sovereign, the national necessity for separate nomenclature diminished. The name lost its local sense in the political development that ensued until the limits of “Canada” are now the Atlantic and the Pacific.

The road from 1535 to 1935 has been a long one in the history of our country. Often the way has been difficult and costly in lives, and there were times when the future did not seem clear. To take a moment now and

then for looking back alone that trail is not time lost. It is restful and at the same time gives us courage for the struggles to come.

So this August it will not be out of place to give a passing thought to two Indian captives who in their happiness to be home again gave Jacques Cartier a word that has come to mean so much to us.

Those two Indians wintering in P'rance must have been the first Canadians who were ever homesick in a foreign land. 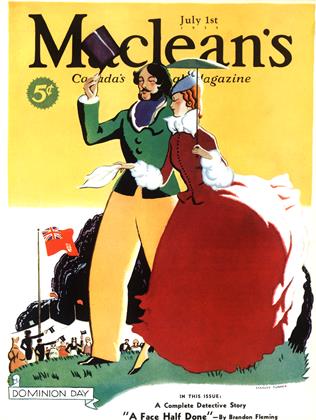