DRAKE OF ENGLAND” iS really more of a pageant than a picture; a stately procession of events, with plenty of stirring music, with flags, costumes and speech-making, and occasional impressive "floats” in the shape of famous historic tableaux. It won’t keep you breathless at any point, not even in the big Armada scene at the end; but if it’s spectacle you want, on a very grand and rather solemn scale, here it is.

Athene Seymour plays Queen Elizabeth in the traditional high-handed way, and Matheson Lang’s Sir Francis is very much the stout and sturdy British seaman we had always imagined him. "Drake of England” is really your favorite history lesson, splendidly illustrated and highly rewarding, but with an absence of plot and suspense more characteristic perhaps of history lessons than of movies.

TOVE BETWEEN the two principals of this picture (Dixie Lee and Joe Morrison) has so many blights and setbacks that the audience is almost as discouraged as the lovers before it finally comes into bloom. Gracie Allen and George Burns are both in the picture, however, and help quite a lot. They travel about the country in a steam calliope which not only provides living and sleeping accommodation but plays "Lookie, Lookie, Lookie” to them from morning till night. So it isn’t much wonder that Gracie is even more unhinged than usual.

I liked best the scene in which she gives a fascinated traffic cop a lesson in the art of paper-tearing, using her summons slip for the demonstration. “Love in Bloom” would have been a more entertaining picture if there had been more of Gracie and her George; or, failing that, less of Dixie Lee and Mr. Morrison. On the whole, it’s strictly summer entertainment designed for people who go to the movies as much for the weather conditioning as for recreation.

Oil for the Lamps of China

STEPHEN CHASE (Pat O’Brien), hero of “Oil for the Lamps of China,” is an American oil salesman in China, a young commercial missionary who makes his company his religion. For its sake he sacrifices Inis child, estranges his wife, loses his best friend and almost gets himself killed in a communist uprising. In return for all this his superiors cheat, exploit and punish him at every opportunity. The hero, however,

keep still. Resuming his pacings, he paused before the pile of discards. Oddly enough, some of the yellowing papers screamed sensational details of crashing markets; then his boot-tip unearthed another item from the heap of rubbish. For a moment he stood gazing at it incredulously; at its stiff cream cover laced with colors he had once worn. Unbelievingly, he picked up this magazine of his school. It seemed alien and impossible here. What was it doing here, this relic of the past? He had helped to canvass for those very advertisements—how many years ago? Sixteen? How old a man could get in sixteen years. He stared at the date, 1919!

THERE WAS a section near the front headed with a poem by T. Gladwell. He remembered Gladwell, a vigorous, fairhaired lad. The caption “Aftermath” bore a familiar, now too trite, subtitle, italicized, "Lest We Forget.” And under it were names: graduates, undergraduates, alumni. . . . His eye ran down them, and one in the alumni column was carefully underlined in black ink “Major Colton Frederick Harrison, Killed in Action, April, 1918, posthumously awarded D.S.O.” Harrison—that was the name on the door ...

clings stubbornly to his faith that “the Company looks after its own,” his bump of idealism being so highly developed as almost to suggest that he must have been dropped on his head as a child.

There’s a bright ending tacked on, which fits the story’s candid exposures so badly that you can’t possibly believe it—and probably aren’t intended to. The narrative is excitingly and convincingly handled, and Pat O’Brien plays the hero-victim’s part so sympathetically that it is possible to forgive and even at moments to admire his unreasonable optimism.

W/TITI ALL the former screen crooks * V turning policemen, it’s getting so you can’t tell a G-man from a gangster. In this picture the G-man is a gangster for quite a stretch of the story. It’s a quick-running, sharply turned picture, which moves with surprising smoothness considering that it is largely concocted from a number of widely separated and actual criminal episodes. The San Quentin jail-break is included, also Dillinger’s last visit to the movies.

Chester Morris is the Government agent who gains the confidence of Gangster No. 1, pals round with him, then tracks him down ; all in highly enterprising, resourceful and G-manly fashion. It’s an exciting, wellhandled picture, and should be a lesson to those members of the criminal class who attend the movies to be more careful of the company they keep.

"COR THE moment, Hollywood has stop-L ped trying out fancy experiments on George Raft—he has been successively a bullfighter, a sloe-eyed Chinaman, a Cuban dancer, and a saxophonist—and has given him back to us in one of those tough, cagey,

American-hand-tailored parts which seem to be second nature to him. It’s a gangster mystery, with a sharp, brilliant story leading up to a remarkably weak solution. The actual working out of the mystery doesn’t matter, however; the excitement is in the story itself rather than in the solution.

George Raft plays the part of Ed Beaumont, loyal right hand of Paul Madvig, a political boss (Edward Arnold), his business being to advise his chief on everything from evening socks to gang strategy. Madvig accepts his suggestions regarding the socks, but trusts to his own strategics, which leads to the familiar complications of gang violence. Both in writing and direction, the picture is distinguished by unusually high staccato style. Its best feature, however, is George Raft’s laconic portrait of Ed Beaumont—something you are likely to remember.

rT'HE FLAME WITHIN” has very little style of any kind, except possibly clothes style. The characters all talk too much, they are all crazily in love with the wrong people, and everyone rushes about in a state of suppressed or outright hysteria. They’re all very high-class people, too. Ann Harding is a famous psychiatrist, Maureen O’Sullivan is an heiress, Louis Heyward an international dipsomaniac. Sometimes it seems as though the only sensible people in the movies were underworldlings: they may have all the wrong motives, but they don’t chatter and confide, and when they try to climb out of windows it’s usually because someone is behind them with a gun.

The heiress in “The Flame Within” tries to climb out of the window because her young man has been drinking again. Psychiatrist Mary White (Ann Harding) pulls her back, cures her suicide complex, cures her lover’s dipsomania, then goes all to pieces herself. Referring to her love she cries:

Escape Me Never.—The difficulties of being wife to a genius. With Elisabeth Bergner giving a beautifully clear and moving performance as the wife. Highly recommended.

Break Of Hearts.—Shows Katharine Hepburn also married to genius and greatly worried by it. The Hepburn performance doesn't stand up very well, however, especially by comparison with Miss Bergner’s.

The Devil Is A Woman.—Marlene Dietrich in a Von Sternberg picture which has a great deal of style but very little sense. Miss Dietrich wears a mantilla and drives everyone, including even Edward Everett Horton, crazy with her beauty. Dietrich admirers may enjoy it.

The Informer.—Dublin story of the Sinn Fein rebellion. One of the year’s very best pictures, with Victor McLaglen giving the most impressive performance of his career. Highly recommended.

G-Men.—Underworld picture, new style, with James Cagney, still rough and tough but this time on the side of law and order. Good entertainment, if you don’t mind a lot of shooting. But not for children.

Let ’Em Have It.—More underworld life, with plenty of excitement and some educational notes on crime detection which should teach criminals not to leave gloves, shoes, and especially, half-eaten apples, behind them. Bruce Cabot plays Public Enemy No. 1.

Our Little Girl.—Public Tot No. 1, in a routine Shirley Temple story about the divorce problem. A rush order, as Shirley is beginning to stretch out of her parts. For Temple admirers.

Call Of The Wild.—Action story of early Alaska, with Clark Gable, very rough and unshorn, as the hero, and Loretta Young, very finger-waved and soignée, as the heroine. Good entertainment.

The Scoundrel. — A witty, worldly picture, v/ith an unexpectedly unworldly ending. With Noel Coward. One of the year’s most interesting films.

Goin’ To Town.—Mae West as a cattle queen, fighting her way through the refinements of upper-class society. West admirers may like it. Those who wonder what anyone sees in Mac will continue to wonder.

Les Miserables.—The Hugo classic condensed to a two-hour performance with no loss of drama or interest. With Fredric March, Charles Laughton. A family film and recommended.

Ten Dollar Raise.—Easygoing comedy about a worried bookkeeper (Edward Everett Horton) who achieves his life’s ambition and tells the boss off. A family picture. 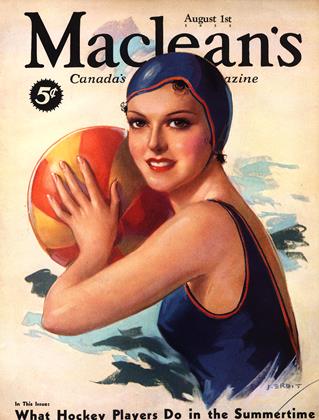