WITH TECHNICOLOR stock still nervous, with some people confidently predicting the end of the black and whites, others worrying about the return of the spectacle film and what will happen when Mr. Busby Berkeley puts his chorus ensembles into chromatics, one thing at least remains beyond argument—that “Becky Sharp,” considered simply as a color spectacle, was a lovely achievement. It doesn’t perhaps mean anything to say that it makes the old technicolor process look like very thin water color which a small child had applied with a rag; they looked like that anyway. The technicolor in “Becky Sharp” makes even natural color seem thin and faded in comparison. It’s a little as though one were suddenly provided with miraculous spectacles which not only magnify the world enormously but intensify and enrich it at the same time.

Even in black and white Miriam Hopkins’s shrewd and disturbing Becky Sharp would have given the picture genuine distinction. It isn’t an entirely even performance; there are moments when it seems keyed a little high. Most of the time, however, it is entirely consistent in intelligence, pace and style with the unique demands of the film.

ALIBI IKE,” Joe E. Brown’s latest picture, is a baseball comedy, very fast and lively, with the technical points sufficiently simplified so that even little girls and old ladies can follow it closely and sympathetically. Joe is an ace pitcher with a heart of gold and all his brains in his pitching arm. Racketeering sportsmen can’t get to first base with Alibi Ike, thwarted love being the only thing that can spoil his baseball form. It all builds up into a fairly sturdy plot. Our chief criticism of Joe E. Brown—that he is a cut-up more than a comedian—still holds. His antics in this picture, however, have real authority; he knows his baseball almost as well as Ring Lardner, who created the character.

KAY FRANCIS is a social worker in this picture and George Brent is an engineer. Miss Francis wears a Travellers’ Aid badge to identify her with her profession, and to identify him with his, Mr. Brent is shown mostly against a background of complicated bridge structure—very becoming. The

from His Majesty’s forces. Seconded for special service.”

“Oh, my sainted aunt!” said Sandy. “What is it? For heaven’s sake put me out of pain. Have wè to tout deputations of suspicious neutrals over munition works or take the shivering journalist in a motor car where he can imagine he sees a Boche?”

“The news will keep. But I can tell you this much. It’s about as safe and easy as to go through the German lines with a walkingstick.”

“Come, that’s not so dusty,” said Sandy, and began cheerfully on the muffins.

I MUST spare a moment to introduce Sandy to the reader, for he cannot be allowed to slip into this tale by a side-door. If you will consult the Peerage you will find that to Edward Cospatrick, fifteenth Baron Clanroyden, there was born in the year 1882, as his second son, Ludovick Gusta vus Arbuthnot, commonly called the Honorable, etc. The said son was educated at Eton and New College, Oxford, was a captain in the Tweeddale Yeomanry, and served for some years as honorary attaché at various embassies.

The Peerage will stop short at this point, but that is by no means the end of the story. For the rest you must consult very different

engineering part may be all right—I would not know about that. But I couldn’t believe in a Travellers’ Aid official who wears Bergdorf-Goodman tailleurs to work in her modest booth at the station, and white satin halter-neck frocks in the evening.

Soon after our hero and heroine fall in love, Mr. Brent begins to have trouble with his bridge work—it’s all on account of the wicked paid labor agitators who are causing Warner Brothers so much worry at present. As though labor and capital weren’t enough modern problem for one picture, marriage and a career come into it, too. Miss Francis settles the labor-capital problem, and though the picture doesn’t say so I gathered that marriage settled the career. “Stranded,” though it sets out to deal seriously with our modern complications, won’t put a tax on anything but your patience.

Crawford in “No More Ladies” represent quite a different attitude to life from the hero and heroine of “Stranded.” They don’t build bridges or rescue travellers. They invent and consume cocktails and flit about in night clubs. They don’t converse either; they talk dialogue. “Scratch a woman and you find a wife,” is a cynical aphorism invented by Sherry Warren (Robert Montgomery) before marriage. After marriage he is rebuked to discover that he has scratched a wife and found a woman; a fine-souled, noble woman who forgives him his infidelities and takes him back, though not till she has taught him a good lesson and even made him break down and cry. “No More Ladies” is much like other Montgomery-Crawford pictures, except that the interiors are even smarter, the people more handsomely dressed, and Miss Crawford herself more

passionately right about everything than usual.

The Girl From Tenth Avenue

HTHE Girl from Tenth Avenue” is a Cinderella tale about a poor working girl (Bette Davis) who marries out of Tenth Avenue into Fifth, making herself over for her new position in no time, with the aid of the Carnegie Public Library and Hattie Carnegie, Modiste. It didn’t take much making over, sartorially at any rate, for she was a stylish piece to begin with—the movies can’t bear to let their beauties wear basement-price clothes even when, like Miss Bette’s heroine, they are employed part time on piecework. She marries her young man to save him from drinking himself to death over another girl. When the former sweetheart turns up as a rival, Miss Davis manages to triumph over her in a scene sharpened by feminine acidities and enlivened by grapefruit throwing. It’s the usual sort of summer movie, and you don’t have to go all the way downtown in the heat to know what happens to everybody in the end.

TIMES SQUARE LADY” is about a beautiful girl (Virginia Bruce) whose father dies leaving her heiress to half a dozen amalgamated sporting rackets—a whippet-racing organization, a night club, a hockey league, etc. It’s an embarrassing legacy, especially as the various organization managers go with the bequests—as tight-faced a group of gangsters as you may ever hope not to meet outside a moving picture.

It isn’t giving anything away to tell you that these business men combine in their own interest, and that the irresistible one

of the group (Richard Taylor) who is specially delegated to put the works on the lovely orphan, finds true love getting the better of business enterprise. ‘Times Square Lady” is swift and fairly exciting with much rushing about in taxis, muttered telephoning, plotting, counterplotting, threatening and killing. Even in the dog days with everyone else off to the country, telephones disconnected and dust sheets on the furniture, gangland keeps working away in the hot downtown sections without a thought of vacation.

Drake of England.—Life and adventures of Sir Francis Drake, the plunderer of Spain. Fine dramatic material rather dully handled.

The Flame Within.—Hysteria among the upper classes. With Ann Harding as a famous woman psychiatrist handling advanced cases of alcoholism, suicide mania and love. Not recommended.

G-Men.—First of the underworld pictures, new series, with James Cagney very tough and lively as the chief terror of public enemies.

Public Hero No. X.—Further criminological studies. The police force is the hero, but the story is passed largely on the life of the late John Dillinger.

Let ’Em Have It.—With Bruce Cabot. The series gets really tough in this picture, with murders, bank lootings, gang warfare, etc. The point of view is very public spirited, but these pictures are not for the young and susceptible.

Oil For The Lamps Of China. — Excitingly handled story of American industrial expansion in China. A little spoiled by the ending, whose point is carefully muffled so that no one’s feelings may be hurt. Still it’s not a picture to be missed.

The Glass Key. — Dramatic, tersely handled story of political racketeering. With George Raft so good in a straight American part that we hope for his sake and our own he will never have to be dressed up in boleros, sashes and fancy sleeves any more. Note: “The Glass Key” is not for children.

Escape Me Never.—Elisabeth Bergner makes for ever understandable all that has ever been said or written about the plight of a wife married to genius. The most beautiful screen performance of the year.

Break of Hearts.—Turns out to be a very bad break for Katharine Hepburn. The story of the domestic difficulties of an orchestra leader and his beautiful wife, it presents a number of stock situations conventionally handled.

The Informer. — Liam O’Flaherty’s Dublin story of the Sinn Fein rebellion, magnificently translated to the screen. The year’s most distinguished picture.

Goin’ To Town.—Mae West as an ambitious cattle queen, has an encounter with high-class society, and society comes off second-best. For West admirers only.

The Scoundrel. — Noel Coward makes his film début in a picture that is a surprise-blend of worldliness and the supernatural. The most talked of film of the season.

Call Of The Wild.—Action story of the Yukon, with Hollywood’s two bright ornaments, Clark Gable and Loretta Young, figuring in mackinaws and ear-muffs. Slightly preposterous, but good entertainment. A family film. 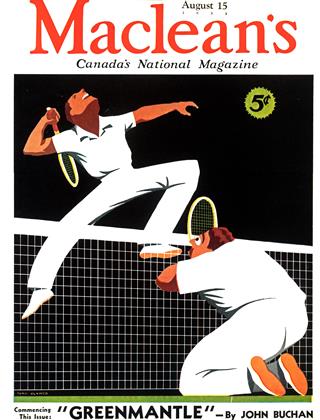