THIS DEPARTMENT at the moment of writing is on vacation, with nothing to remind us of the motionpicture industry except the fine three-component technicolor effect produced by nature on the lake at sundown and a week-old city newspaper advertising half a dozen pictures we are glad to have missed. We are therefore in the right mood of detachment and amiability to take up a matter that has been calling for comment for some time— the relation of movie reviewers to the movie-going public.

Movie reviewers as a rule like their job, the only grief being that the public so seldom likes movie reviewers. Motion-picture critics, we gather from correspondence that occasionally comes our way, are stupid, superior, complacent and cynical. They are in the pay of certain companies to praise certain pictures, they are in the pay of Hollywood to praise all pictures, they are so mean and opinionated that they won’t praise any pictures. "Mae West is the worst woman in the world and you are just as bad,” one angry correspondent wrote. “No doubt you are in the pay of Hollywood.” “1 always read your column to see what pictures you pan,” wrote another, ‘and then I go to see them.”

Well it’s nice to have supplied even one subscriber with a system. In any case we are quite able to sympathize with the people whose feelings are stirred up, having been annoyed by movie critics ourselves more than once. Nothing is more irritating than to be told that the picture you have just thoroughly enjoyed is perfectly suited to the threeyear-old intelligence; unless it is to sit bored to death through one that is all talk and scenery and no action, and to be informed later that here at last is a picture suitable to the adult mind.

In other forms of popular entertainment—baseball, for instance, or hockey— when someone hands out an arbitrary ruling you can have the satisfaction, if you feel strongly enough about it, of bouncing a pop bottle off his head. All

you can do when you are annoyed by a movie review is write a letter to the editor in the hope that he will bounce it, in the form of a brickbat, off the reviewer’s head.

MOVIE REVIEWERS, to do them justice, are rarely as objectionable as they sound. They don’t actually set out to insult the judgment of their readers; at worst, they are only innocently concerned with showing off their own. And they are rarely in the pay of Hollywood. People in the pay of Hollywood invariably look as though they were. And you have only to see a group of movie reviewers gathered together at a preview to realize that as a class they are professionally untainted.

Nor are they, as a rule, at the bidding of any producer or group of producers. Editors in the past few years have realized that motion pictures, like the stage, are entitled to independent criticism. The days are past when a picture reviewer was limited to a dozen or so superlatives, together with a season ticket to the movies. Now he can use all the adjectives he likes so long as they are printable, and the theatre managers make him pay for his ticket. Movie criticism, as a result, has an opportunity to be just as honest, intelligent and fair-minded as the person who writes it.

The ideal motion-picture critic should have a working understanding of all the complex factors that make up a picture—photography, timing, direction, characterization, dramatic structure, etc. ; and in addition he should be able to make every allowance for his own personal prejudices. The lethal feeling he may entertain toward child actors as a class, for instance, shouldn’t blind him entirely to the genuine acting ability of Shirley Temple or to the excellence of Jackie Cooper’s performance in such pictures as "Treasure Island” or "The Champ.” Feminine reviewers mustn’t confuse their natural interest in the high dramatics of Joan Crawford’s wardrobe with admiration for her art. Masculine reviewers mustn’t be irritated by George Arliss’s obsession

with fancy dress beyond the recognition that if he always does the same thing, he does it always with the same high technical competence. And finally the most important qualification for reviewers of both sexes is that they must really like motion pictures. Most of them do and never get tired of going to them, honestly preferring the dullest movie in the world to no movie at all.

Reviewers at best are only human and capable occasionally of giving a bad review to even a good picture for reasons that have nothing to do with the entertainment itself—because they have had to go without lunch, because the woman behind chattered, because they are worried about parking space—the best paced picture ever made tends to drag when a policeman at any moment may be tying a ticket to your steering wheel. On the whole, however, they try to be fair and to sort out a picture’s component weaknesses and excellences; recognizing that in the synthetic nature of their production, a picture is rarely completely good and still more rarely completely bad.

READERS occasionally write in asking that lists of - pictures suitable for children be published. The difficulty is that, beyond the Walt Disney films, the Christmas pantomimes and an occasional comedy, there are practically no pictures for children. Films suitable for family entertainment are usually noted as such—always supposing the family to be reasonably grown-up. Very small children just have to get along without lists. There doesn’t seem to be anything to be done about it.

As a further note: Maclean subscribers complain occasionally because reviews do not coincide with the public appearance of the pictures they describe. This is because previews are not always obtainable, and when they do occur they fall sometimes a day or two, sometimes several weeks, before the actual public showing. As the motion-picture section itself must go to press some weeks before the magazine appears on the news stands, the difficulties of making the reviews correspond with any week’s programme are obvious.

Becky Sharp.—The triumph of technicolor. Robert Edmond Jones is responsible for the superb color design, Rouben Mamoulian directed, Miriam Hopkins plays Becky. A picture that cost a fortune and will probably make several. Not to be missed by anyone in the family.

Ginger.—Starring vehicle for Jane Withers, Hollywood’s latest half-pint Dusé. Miss Withers pursues her career of being everything Shirley Temple is not. As entertainment, “Ginger” is harmless but routine.

Call Of The Wild.—Clark Gable and Loretta Young, those two rugged Jack London characters, trek for gold in the Yukon. Mr. Gable wears a mackinaw and a two-weeks stubble. Miss Young wears a Gibson shirtwaist and a wavy bang. The picture is preposterous, but exciting, with a good villain (Reginald Owen) and some sharp action.

Alibi Ike.—Joe E. Brown as the Ring Lardner character who could throw a baseball round a corner and whose explanations were as twisted as his curves. Fairly exciting and amusing.

The Girl From Tenth Avenue. — Bette Davis, hitherto the screen’s most baleful heroine, plays the rôle of a simple-hearted working girl who marries a rich alcoholic to reform him. Miss Davis manages her own reform much more plausibly, but we liked her better bad.

The Flame Within.—Ann Harding as a famous woman psychiatrist who takes advanced dipsomania and suicidal dementia in her stride. Not recommended.

The Glass Key.—Dashiell Hammett’s story of political racketeering, done with sharpness and style. With George Raft in his best rôle in several years.

Oil For The Lamps Of China.—Excellently handled story of foreign trade expansion in the East. Has a perfunctory happy ending so obviously tacked on to placate angry oil companies that it might easily have the opposite effect. With Pat O’Brien. Recommended.

Escape Me Never.—Elizabeth Bergner as the waiflike Gemma Jones, gives the finest screen performance of the year. Highly recommended.

Public Hero No. 1.—Highly exciting G-Man picture based largely on actual events, which proves among other things that John Dillinger, though a great handicap to society, was a godsend to the script-writing department. With Chester Morris, Joseph Calleia. Not for children.

The Informer.—Story of the Sinn Fein rebellion of 1922, with Victor McLaglen magnificent as Gypo Nolan, the informer. Strongly handled, with no prettifying touches, “The Informer“ is one of the most impressive pictures of the year. 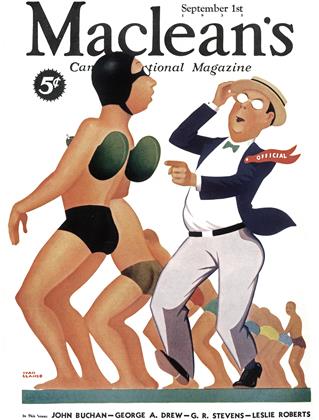