L OVERS of adventure, especially the majestic adventure of empire building, will find much to impress them about “Sanders of the River.” Sanders (Leslie Banks) is a District Commissioner in Africa, a civil official whose business it is to keep warring tribes at peace, prevent slave raids, reward loyal and punish disloyal chieftains, and remember every important face along the coast of West África, a job calling for the combined talents of Mussolini and Anthony Eden.

Leslie Banks’s dignified yet casual performance didn’t quite convince me that he was entirely the man for the job, and Paul Robeson as his loyal right-hand chieftain seemed much too light-hearted and roguish for the perils and responsibilities of his position. Still, his singing of native songs is magnificent, while the photography throughout the picture is excellent. The African scenery really looks like African scenery, and the descriptions of native life are circumstantial and, we are told, authentic. The producers have turned out a strange dark pocket of human society—Culu, Uganda— mostly unfamiliar to Western eyes. On the whole “Sanders of the River” is more interesting as travelogue than as story.

Love Me For Ever

RACE MOORE warbles her way fluently through this lively story supported by a hand-picked operatic score— mostly gems from “La Bohème” together with “Funiculi, Funicula,” “II Bacio” and the quartette from “Rigoletto,” not to

mention a bit of ragtime and such old favorites as “Rings on My Fingers” and “Jingle Bells.” It takes plenty of versatility and an absolutely non-shatterable soprano voice to put across a programme of this sort, and the abounding Miss Moore is the girl who can do it. She is an ambitious singer in the picture, adored by a gambling racketeer (Leo Carillo), with no particular training but a natural ear for Puccini.

The story describes the racketeer’s efforts to establish his diva in the Metropolitan Opera House, gambling everything on her future uijitil in the end he is left with nothing of his fortune but a ticket to the Metropolitan. He can’t, even use this because two of his more pressing creditors are waiting for him in the lobby with a gun—very discour-

aging to a lover of opera. It turns out all right, of course, in the end. “Love Me For Ever” is specially built for Miss Moore’s talents and fits them perfectly. Recommended.

TT’S ALWAYS difficult to decide whether

producers figure that in the off-season people are too indifferent to notice much what a picture is like, or whether they’re so indifferent themselves that they just don’t give a darn. “Calm Yourself” might be the result of either state of mind. It’s about a young advertising man (Robert Young) who has the idea of opening a confidential service to look after people’s personal problems. It isn’t a specially new idea, but Robert

Young seems to think it is, and gets almost as bright-eyed over it as Shirley Temple planning a surprise party for her estranged parents.

Among the personal problems confided to Mr. Young’s care are a year-old infant, a boot-eating mastiff and Madge Evans. There’s quite a lot of rushing about by a number of people getting all these matters settled, and about the best you can say for “Calm Yourself” is that it keeps a lot of people busy in the slack season, besides leaving your mind perfectly free for your own personal problems.

Murder in the Fleet

VOU HAVE to have patience with “Murder in the Fleet” because it devotes the first third of the picture to getting things set—excusable because there’s always lots to do round a battleship, especially when it is visitors’ day and there’s a boatload of secret machinery to be set up before next day noon. (I thought that under the circumstances the captain might have cancelled Visitors’ Day, but it seemed that some of the visitors were needed as suspects. )

Once the murders start, however, things pick up. No one in the audience actually screams during the picture, but there are several occasions for the sharp intake of breath. It must be admitted that the comedy relief provided by Nat Pendelton and Ted Healy is the kind you get from a headache' that takes your mind off other things. Robert Taylor is the hero, a navy lieutenant who turns detective. Fair entertainment. 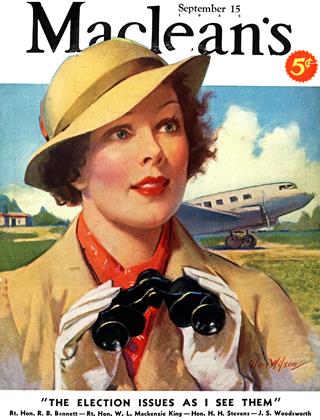