So Red the Rose

SO RED THE ROSE" is a romantic picture of the deep South during the Civil War. As the story opens just before the outbreak of the war, we have a glimpse of that elegant society in which all the men were gallant, all the women beautiful and all the interiors pure colonial. Compliments and tall frosted glasses of mint julep circulated continuously, and happy negroes sang spirituals in the slave quarters at evening. But the war killed the fine young men, the slaves became a shambling menace, and the Union army marching through wrecked and burned the colonial houses.

It isa traditional if rather partial description of the Civil War South, but it is beautifully and movingly handled and will certainly make a great many people cry not all of them Southerners either. Margaret Sullavan is the heroine, with exactly the right voice and looks for the part. Randolph Scott plays the hero rôle, with a touch of reserve which, the way the other boys behaved, looked suspiciously Northern to me.

Mutiny on the Bounty

UNTIL YOU have seen Charles Laughton’s Captain Bligh, you haven’t seen a villain on the screen, not even one of Charles Laughton’s own villains. He will make you not only detest him but admire and even pity him—a complicated performance only possible to an actor of Mr. Laughton’s talents. Most people know the story: how Captain Bligh, the meanest seaman who ever sailed a ship, took a crew from Portsmouth to Tahiti, how they mutinied on the letum voyage and set him adrift with a few loyal supporters in an open boat on the open seas: and how, being utterly ruthless, savage and unconquerable, he brought his cockleshell through 4,000 miles of sea to safety.

Altogether it’s an eighteenth century adventure that might have been specially invented for the movies in their most epic mood, just as the rôle of Bligh in its almost insane extremes of meanness and magnificence might have been created for Charles Laughton. Clark Gable is cast as the highminded ship’s officer who leads the mutiny, and Franchot Tone as the midshipman brought back to England to face the charges. Both are considerably mussed up by wind, weather and rough sea conduct, and both come through as a great credit to the navy.

“Mutiny on the Bounty” took two years to film and cost two million dollars, and is well worth the time and money spent on it.

Three Kids and a Queen

"VTOU TAKE an immensely wealthy old lady with no one to love her and a group of foundlings overflowing with affection and not a cent in the world, and bring them together, filling in the background with nasty relatives and wicked kidnappers all after the old lady’s money, and you have “Three Kids and a Queen.” Time: One hour and twenty-five minutes. It’s an entertaining little jigsaw of a picture with none of the pieces missing—young love, gangsters, a country hide-out, a comedy barber, even a dog actor.

It worried me a little to see an actress of May Robson’s years and prestige being dumped out of carriages, rolled out of bed and yanked through windows. However, she came through it sportingly, with enough spirit left to box the ears of one of the gangsters when he exasperated her. It’s a pleasant, sentimental picture which won’t upset anyone’s calculations at any point.

A/flRIAM HOPKINS’S latest starring -1-YX film presents a fine stirring description of San Francisco in the days of Forty-nine. Miss Hopkins is a blonde adventuress who arrives on the Coast in the midst of the gold rush, eager for her share and not too scrupulous about how she comes by it. How the outraged Vigilantes finally took charge of San Francisco’s morals, and a poet from New' York (Joel McCrea) took charge of the heroine’s, forms the theme of the story.

Miriam Hopkins, as usual, behaves w'ith spirit and energy, but the picture’s best performance is given by Edward Robinson as the Terror of San Francisco, a sort of Little Caesar of 1849. In the end the heroine sails away with her poet leaving Mr. Robinson in the hands of the Vigilantes, so the picture may be said to end happily. It’s rough in places, but lively and entertaining throughout.

THIS IS the story of a famous actress (Kay Francis) with an unfortunate but innocent past which she is trying to hide for the sake of her child. It’s hard enough for a celebrated actress to keep her private affairs to herself, and it didn’t help in this case w'hen she fell in love with an equally celebrated newspaper man who felt his first duty to be to his editor.

It’s very sad and harrowing, and though overdramatic, is probably true—to the extent at any rate that famous actresses frequently do use questionable judgment about their personal affairs. Kay Francis is handsomer than ever and, though badly distracted, manages to be quite as discriminating as usual about her wardrobe and to demonstrate what the w'ell-dressed woman should v'ear in time of trouble.

V\ TE ARE so accustomed to seeing Ann YY Harding up to her ears in work—running a hat shop or a medical practice or a facial surgery—that it’s a little hard to get used to the idea of her floating off on a moonbeam to a dream appointment with Gary Cooper. I don’t think Ann Harding

quite believed it either: her voice when she was encouraging her lover had once or twice just the confident indulgent note she uses when she is cheering up her medical cases.

The story, as you probably know’, is about a boy and girl w'ho fall in love as small children. Fate separates them, the girl becomes a duchess and the boy an architect, and they don’t meet again till the hero turns up to remodel the ducal stables. It was w'hen fate stepped in the second time that they took to meeting in dreams. They were very poetical dreams, suitable to a beautiful, w'ell-bred duchess, and a lot of people were greatly moved by them. It didn’t seem very real to me—but then it wasn’t meant to be.

I Live My Life.—All about a petted heiress, who takes a happy young archaeologist off a Greek Island and makes a hysterical business man of him. Joan Crawford is the spoiled heiress and Brian Aherne the spoiled archaeologist. Joan’s most amusing picture. For adults.

Metropolitan. — Backstage jealousies and troubles, and front-stage songs and triumph. Another opera picture, this time with Lawrence Tibbett, whose singing is superb. Recommended.

King Solomon Of Broadway.—A reasonably exciting night-life melodrama, which slides along smoothly in the groove made by half a hundred exactly similar pictures that have preceded it. With Edmund Lowe.

Transatlantic Tunnel.—What happened when engineers tried to complicate civilization still further by establishing direct transit between America and Europe. Exciting and frequently impressive. Boys will enjoy most of it.

O’Shaughnessy’s Boy. — Circus story, with Wallace Beery and Jackie Cooper back once more as father and son. The Beery-Cooper alliance is still effective, though Jackie will soon outgrow it completely. A family film.

Shipmates For Ever.—How Dick Powell decided to give up crooning and become a naval officer, told in a picture some two hours and a quarter long; which was two hours too long for this reviewer.

She Married Her Boss.—All about a department-store executive who wanted love and home life and all the feminine joys you don t get in department stores—at any rate, in the business office. Thanks to the expert and beautiful Claudette Colbert, this turns out to be a highly entertaining comedy.

The 39 Steps. — The John Buchan fLord Tweedsmuiri story about the foreign espionage system at work in England and Scotland, and all the trouble it caused a visiting Canadian i Robert Donati. Very lively and exciting. For the family.

The Dark Angel.—Story of a blinded war hero, so tactfully handled that, though frequently tearful, it is never actually embarrassing. With Merle Oberon, Fredric March, Herbert Marshall.

The Crusades.—Mr. Cecil de Mille on the Middle Ages. A tremendous and elaborate picture with handsome people, including Loretta Young and Harry Wilcoxon, fine costumes, some stirring scenes of action, and some weak stretches of dialogue. A family picture. 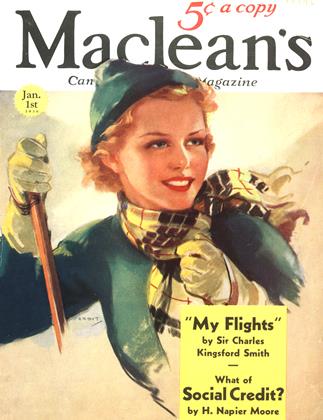