INTERNATIONAL spy pictures, even the poorer ones, are always bound to be fairly exciting, and “Rendezvous” happens to be one of the good ones. Its hero (William Powell) is a code expert and very useful to Washington. The time is the late war. He is also much appreciated by a beautiful society girl (Rosalind Russell) whose attentions tend to drive him to the Front, and whose determination to have him at any price keeps him right there in Washington she happens to be a girl with influence at, the War Office.

As it turns out, a code expert in war time can get all the excitement he needs without going outside his home town, esjxicially if the home town happens to be Washington, where, according to "Rendezvous,” spies and spyesses are thick as blueberries, all of them old trigger hands and all of them anxious to oblige their countries by shooting Mr. Powell. Like all William Powell pictures, "Rendezvous” is slick and expert and hand-tailored to the special Powell measurements. It’s better than "Star of Midnight” and almost as good as “The Thin Man,” though not so pleasantly rowdy. Altogether it’s a picture not to be missed.

GEORGE ARLISS, artful dodger through the centuries, is back in the present century once more in "Mister Hobo.” It’s about an old tramp whose name happens to be Rothschild and who is presently made president of a Paris bank; since any bank feels better with any Rothschild on its directors’ list. Mr. Arliss’s face is almost completely disguised by an enormous mustache, but the old Arliss oddities and tricks are there for you to recognize.

The story is tresh and unusual, and it’s fresh and unusual, too, to see Mr. Arliss, ordinarily so elegant, fastening his trousers to his braces with a safety pin. “Mister Hobo” is one of the easy-going pictures in which Mr. Arliss is content to coast a bit between spurts of history. Arliss admirers are sure to enjoy it.

'"THANKS A MILLION” also has a novel idea behind it; unless you don’t call it a novel idea to have Dick Powell croon the electorate into making him a state governor. It tells how in the midst of an election campaign Crooner Powell drops like a bolt from the blue into the State political ma-

chine. As might be expected, the bolt presently wrecks the machinery, the governorelect is ousted, and the hero, who had only come out to oblige the entertainment committee, finds himself to his consternation headed straight for the Capitol.

"Thanks a Million” provides some good songs, some funny situations, and some expert comedy from Fred Allen, Patsy Kelly and. more surprisingly, from Dick Powell himself. It’s a fresh and lively picture, and will probably start a whole new train of ideas in Hollywood. In fact, it won’t, surprise us now if they make a picture showing Shirley Temple running for the United States Senate.

nr HERE’S lots of gunplay in “Mary Burns, Fugitive,” which tells how the innocent proprietress of a tea-shop (Sylvia Sidney] becomes involved with a gangster, is captured in a gun battle between the police and her lover and sent to prison for fifteen years—something that can easily happen to Sylvia Sidney in the movies, because no other screen actress can be made to look both pathetic and attractive in a jail uniform several sizes too large. Mary Burns presently makes a jail break so excitingly arranged that it takes you some time to realize it isn’t a jail break at all -just the G-men up to their old tricks and figuring apparently that two birds in the bush are worth one in the hand. Instead of leading them to her gangster sweetheart, however, Mary falls right away in love with an explorer, and thus makes way for a happy ending.

It seemed to me that Mary Bums might have suspected that her first beau—the killer—was no ordinary young man, and that she might have made out a better case for herself with the prosecuting lawyer and

the police; in fact, it seemed that Mary Burns was no brighter than she should have been. However, she was very attractive to watch, and the picture has plenty of thrills.

T COULDN’T get much excited about “The

Three Musketeers,” even in the tight places in the story. It seemed to need something or somebody to pull it together— possibly Douglas Fairbanks, senior, who in the silent days set a style in d’Artagnans which nobody has approached since. Walter Abel as d’Artagnan was conscientious and eager about getting the French Queen’s diamonds back from the Duke of Buckingham, hustling about with great eagerness by coach and horse, but somehow he didn’t seem quite the boy for the job. There’s a lot of hard galloping and lively swordsmanship, however, to help things along, and on the whole it’s a good picture to take the family to on Saturday afternoon; especially if the family is young enough to think that swordplay is more fun to watch than gunplay, and musketeers are more exciting than racketeers.

'T'HE LAST OUTPOST” featuring Claude Rains seems to have been based on—or at any rate suggested by—the career of Lawrence of Arabia. Mr. Rains plays the part of a British intelligence officer in the remote East, a mysterious figure who plays a lone hand in the military policies of native tribes. The picture provides a number of highly spectacular scenes—one where the hero leads an entire village across a Hooded river, another where he and a fellow officer (Cary Grant) escape from a jungle fire.

The desert and fortress scenes, however, are a little too reminiscent of both “Beau Geste” and “The Lost Patrol,” so that the

excitement is toned down a good deal by the feeling that you have seen it all before and have a pretty good idea how it’s going to come out. Apart from this, "The Last Outpost” is good entertainment.

Mutiny On The Bounty.—One of the greatest sea adventures in history, screened in M-G-M’s (inest style. With Charles Laughton as the awful Captain Bligh. A picture worth going a long way to see twice.

Three Kids And A Queen.—Sentimental comedy about a rich old lady (May Robsoni with no one to love her, and three foundlings with a great deal of affection and no money. It all works out nicely. A family film.

Peter Ibbetson.—Screen version of the Du Maurier play about the two star-crossed lovers who used to meet in dreams. Ann Harding and Gary Cooper are the lovers. Romantic, though rather tearful.

Barbary Coast.—Some highlights on life in San Francisco in the Gold Rush. With Miriam Hopkins as a gold digger of ’49. Edward Robinson as the Boss of San Francisco, and both worth watching.

I Found Stella Parish.—Kay Francis in a variety of troubles and costumes. The troubles are all of her own making, but the costumes are something special. Not highly recommended.

So Red The Rose.—The Stark Young novel of the South and the Civil War transferred to the screen, with great charm and beauty. Margaret Sullavan is the Southern heroine and exaetly right in every particular. A family picture, and highly recommended.

This Is The Life.—Jane Withers, reputed rival of Shirley Temple, acts, dances and sings in a picture of backstage life which shouldn’t cause Shirley to lose any sleep. Not recommended.

Ship’s Café.—Carl Brisson as a ship’s stoker who turned café crooner and found the life too much for a simple seaman. One or two good songs, but not a great deal else.

I Live My Life.—The awful life of the terribly rich. With Joan Crawford as an emotional heiress spoiling for a good spanking. Brian Aherne and Frank Morgan also help to keep things moving. Lively entertainment.

King Solomon Of Broadway.—A night-club plus gangster picture, with plenty of shootings, snatchings and wisecracks, new and old. A fairly standardized product. With Edmund

O’Shaughnessy’s Boy. — For those who like circus pictures and aren't embarrassed by seeing Jackie Cooper and Wallace Beery having a good cry. On the whole, a family film.

Trans-Atlantic Tunnel—A great deal of impressive technical detail, but the picture itself never succeeds in selling you the notion of a transatlantic tunnel as a practical idea. All you can see, especially if you happen to be of the practical type yourself, is a lot of people furiously wasting time, energy and money. The future, however, is interestingly handled.

She Married Her Boss.—A department store executive (Claudette Colbert) marries her boss for love and finds he has married her for efficiency. Not a new idea, but Claudette Colbert’s expert comedy makes it seem fresh and funny. 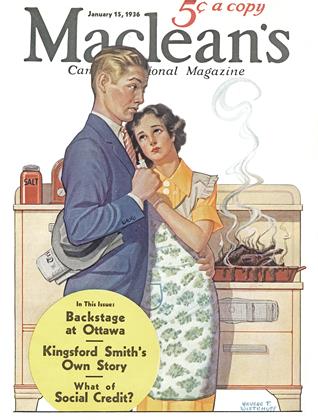