CHINA dramatization CLIPPER” of the inauguration, is a screen in 1935, of the China Clipper service between America and China, and so is both informative and dramatic. Perhaps it’s a little more informative than dramatic but that doesn’t hurt a picture once in a while; or an audience either. It involves the fortunes of a transoceanic flight promoter (Pat O’Brien), a plane designer (Henry B. Walthall), a pair of fliers (Ross Alexander and Humphrey Bogart) and the airplane, The China Clipper. Pat O’Brien, who plays the lead, is an air enthusiast who dreams of intercontinental passenger service, and is so single-minded and disagreeable about it that he loses his wife, sacrifices his friends, kills his plane-designer from overwork, and comes dangerously close at. moments to boring his audience with his bad temper.

As a whole, however, “China Clipper” is well worth seeing. The photography, especially the air photography, is exceptionally fine, and the take-off and voyage of the Clipper, since it represents facts rather than fiction, is genuinely thrilling.

AÆ ARA' OF SCOTLAND,” starring -*-''-1Katharine Hepburn, is one of the most important pictures of the fall season. It’s lavish and sumptuous and swarming with the life of the period, both Scottish and English. As a pageant, it’s magnificent.

As a story, 1 found it a little disappointing. It’s one of those tales of political intrigue so involved that at times you can’t see the plot for the counterplots. Katharine Hepburn plays the central rôle with fire and feeling and a tragic dignity in the final scenes, and Fredric March’s “Bothwell” is a fine soldierly performance. But the film doesn’t build as it should. It’s a little too complicated, a little too elaborate, quite a little too long. “Mary of Scotland,” in fact, is a picture that you are more likely to remember for its scenes, magnificently designed and finely acted, than for its story or for any excitement in the telling.

The Bride Walks Out

rT'HE BRIDE Walks Out” is about a young wife (Barbara Stanwyck) who likes the “unimportant nice things of life” such as $50 negligees, etc. To secure them she runs her husband (Gene Raymond) so

deeply into debt that the installment man arrives presently and collects the important nice things of life the bed, table, chairs and piano leaving the bridal suite bare.

So they quarrel, and the bride starts running around with a department-store owner (Robert Young), and the husband goes round and throws bricks through the store’s plate-glass windows a gag that naturally isn’t quite as funny as it was a year ago when Claudette Colbert used it in “She Married Her Boss.” Nearly all of “The Bride Walks Out,” in fact, is very old stuff. Ned Sparks and Helen Broderick help to lighten it, and Robert Young as the bride’s alcoholic admirer was funny once or twice. But it is far from being one of the season’s brightest comedies.

SING, BABA7, SING” is a frenzied entertainment sketch about a girl who takes the old easy road through the tabloids to fame and fortune. The girl, of course, has talent and looks (she is Alice Faye, with plenty of both) and she is persuaded by an excitable publicity agent (Gregory Ratoff) that the quickest way to make a reputation is to lose the one she already has. So the story, such as it is, is about her front-page escapades with an alcoholic matinée idol (Adolphe Menjou).

It’s not a new idea, but it’s often quite funny, thanks to Adolphe Menjou, who has given up his polished ways and joined the old-fashioned-nightshirt school of comedians. The story rolls along, gathering specialty numbers as it goes—.singers, dancers, the Ritz Brothers, a girls’ orchestra, etc., and everything ends up in a wild

pandemonium of talent. “Sing, Baby, Sing” is high-pressure entertainment, long and loud and hysterically cheerful. If you like it, it will make you happy. If you don’t, it will probably make you very tired.

The Return of Sophie Lang

■pICTURES about competing international jewel thieves are always much the same and always easy to watch. The people in them are invariably calm, handsome and upper-class, and so worldly that they are equally at home on the Riviera and in Sing Sing. And they’re always cheerful and delightful deck-companions and nothing ever embarrasses them, not even when the police shake a half-milliondollar diamond out of their superbly laundered handkerchiefs.

That's the sort of picture “The Return of Sophie Lang” is, with Gertrude Michael and Sir Guy Standing as the two competitors for the famous Kruger diamond. Sophie (Gertrude Michael), a reformed thief, wants it for her employer, the rightful owner. Max (Sir Guy Standing) wants it for himself. Meanwhile the diamond travels rapidly from pocket to pocket, with the police always trying to catch up and always a pocket, sometimes two or three pockets, behind. It all works out fast and smooth at the end, thanks to the unshakeable Sophie. Good, exciting entertainment.

ANOTHER British spy thriller, this • time with wartime Russia as a setting. The characters are a beautiful girl, Natasha (Penelope Dudley Ward), who

nurses the wounded; a handsome officer (Lawrence Olivier) who is one of the wounded; an elderly war profiteer (Harry Baur) who has just made Natasha a fine engagement present of the mortgage on her family estates; and a genteel old lady (Athene Seyler) who chats with the war convalescents and asks them questions about gun emplacements and company positions in such a quavering tell-aunty voice that they boyishly blurt out all their army secrets.

Out of the fortunes of these four. Director Anthony Asquith has made a fast-moving picture with some excellent photography and a dramatic wind-up. Since it all takes place in Moscow and the sets, customs, interiors, etc., are all strictly Muscovite, it’s a little confusing at first to have the characters themselves all so correctly British. Once the picture hits its stride, however, these discrepancies are forgotten. “I Stand Condemned” is no screen masterpiece, but it’s a good, entertaining blend of surprise and romance.

The Poor Little Rich Girl.—With Shirley Temple. Shirley runs away from her rich home and is soon a self-supporting radio artist. For Temple fans.

Hearts Divided.—Miss Betsy Patterson, of Baltimore (Marion Davies), and her troubles with the Bonaparte boys, Napoleon (Claude Rains) and Jerome (Dick Powell). Claude Rains is good, but the rest of the picture is mediocre.

The Witness Chair. — Ann Harding, as a private secretary, shows how far a loyal, brave and loving woman can go in making things difficult for those the loves. Not recommended.

San Francisco.—Clark Gable, Jeanette MacDonald, some grand opera and the San Francisco earthquake. The romance is well handled, but the earthquake steals the picture. Not for small children.

Showboat. — A fine screen version of the musical comedy classic. With Irene Dunne and Allan Jones, together with most of the original stage company. Highly recommended.

Private Number. — Loretta Young gets a situation as a housemaid, and when handsome Robert Taylor comes in the situation becomes a delicate one. Old-fashioned hokum in modern dress. 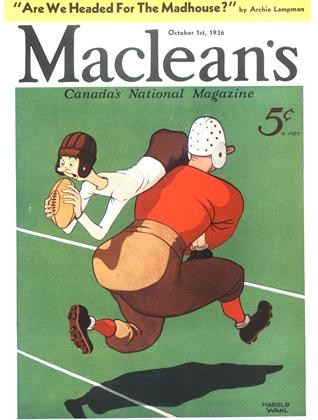