SWING TIME” brings Fred Astaire and Ginger Rogers, dancing more superbly than ever to lovely Jerome Kern music. They have as a supporting comedy team, Helen Broderick and Victor Moore, both worth watching at any time; and there are some lavish and beautiful sets, some handsome clothes, and in addition to the dance duets and ensembles, a remarkable dance solo, “Bojangles,” which Fred Astaire does in blackface against a trick shadow background.

“Swing Time,” in fact, has everything a picture ought to have except a story. It’s a funny thing about the writers who make up plots for Astaire and Rogers—they spend all their energies thinking up ways of keeping the two brooding and separated, when all the public asks is to see them dancing and together. “Swing Time” could do with a lot more dancing and a lot less plot; or, if that’s too much to ask of the principals, just a lot less plot. However, it’s probably ungrateful to complain, since the Astaire-Rogers dancing, when the two do manage to snatch a moment together, is the best they have ever done. Even if “Swing Time” had twice as much plot, it would still be worth seeing.

The General Died at Dawn

"DE SURE to arrive sharp on time at “The General Died at Dawn.” Otherwise you are likely to waste moments getting your bearings, as the picture is unusually fast, compact and detailed. The only other warning we feel we need to issue is not under any circumstances to miss this picture. It’s one of the best, from almost every angle—story, direction, production and acting.

It tells about a young American named O’Hare (Gary Cooper) who is fighting the wolfish bandit, General Yang, on behalf of the oppressed Chinese. O’Hare is beguiled from his objective by a beautiful stranger (Madeleine Carroll) and captured by Yang. Before he leaves the heroine, however, he takes the opportunity of smacking her face, and Miss Carroll is left repentant and heartbroken and holding, it was odd to notice, the wrong side of her face. From this point on, intrigue and counterintrigue spin themselves out with extraordinary rapidity and excitement to a highly dramatic wind-up. Gary Cooper has never been better than in this picture, not even as “Mr. Deeds,” and has never had

better support than he gets from all the players. Altogether “The General Died at Dawn” is one of the year’s most expert and entertaining films.

"K/fEET NERO WOLFE” gives Edward i-VX (“Diamond Jim”) Arnold one of those richly eccentric rôles that he plays with so much relish and vigor. He is a genial amateur detective in this picture, a cultivator of rare orchids, a great eater and drinker, a recluse who never sets foot outside his house, but solves the most complicated crimes merely by sending out feelers into the outer world. Archibald (Lionel Stander) is his principal feeler, a sort of stooge-secretary who goes about gathering the data from which Mr. Wolfe makes his deductions.

Apart from the central character there’s nothing very new about “Meet Nero Wolfe.” It’s easy enough to spot the criminal. He is so obviously the last one to be suspected that he’s the first you’d pick out. “Meet Nero Wolfe” has the usual weakness of routine murder-drama— too complicated a plot with too obvious a solution. Still, thanks to Edward Arnold, it was a pleasure to meet Nero Wolfe himself. We hope to do it again some time, under better circumstances.

Yours For the Asking

TT SEEMS to be George Raft’s fate to be cast perpetually as the boy who didn’t know his forks, and to fall in love with beautiful girls who spend their time lecturing him tenderly about his table manners. In this picture, he is the owner of a low-class gambling joint which he runs with the help of three assistants (James Gleason, Edgar Kennedy, Lynne Over-

man). It isn’t long before he makes the acquaintance of a beautiful society girl (Dolores Costello-Barrymore). She has lots of culture but no money. George has plenty of money but no culture. So they decide to open a casino, combining the resources of both.

The picture from now on turns on the struggle of his three loyal employees to free him from the heroine, the heroine’s struggles to free him from an adventuress (Ida Lupino) and the adventuress’s struggles to free him from his bank account. George, as may be gathered, is anybody’s for the asking. The two principals in “Yours For the Asking” worry along with their sad parts as well as they can, leaving the task of entertainment to the three comics and to Miss Lupino. These, with the assistance of Reginald Owen, manage to provide some lively moments, but the picture as a whole is hardly worth the effort they are obliged to put into it.

"K/TY MAN GODFREY” tells about a 1VX Fifth Avenue debutante (Carole Lombard), who sets out on a “scavenger party” and brings back as her trophy the Forgotten Man—William Powell, thinly disguised by a three-day growth of whisker, an old raincoat and a manner of noble despair. Irene Bullock (Miss Lombard) immediately adopts Godfrey (Mr. Powell) as the family butler. From this point on the picture climbs to wilder and wilder heights of hysteria. Irene Bullock jitters and screams, Mrs. Bullock (Alice Brady) chatters about pixies, Cornelia Bullock (Gail Patrick) broods and plots, Mr. Bullock (Eugene Pallette) roars, and Carlo, Mrs. Bullock’s protégé (Mischa Auer) tries to calm things down by pre-

tending to be a gorilla. That’s the Bullock household in a nutshell. The Bullock scenes are all quite funny and the picture was getting along finely till somebody, possibly the scenarist, remembered the Forgotten Man. It then turned out that “My Man Godfrey” was really about the class-struggle, not the best subject in the world for comedy. Best not to stay for the ending. It leaves you with the feeling that the whole thing was a waste of time.

China Clipper.—Fictionized screen version oí the development of Pan-American Airways and the launching of the China Clipper. Lots of aeronautics, lots of good aerial photography and lots of Pat O’Brien. A good, informative picture; for the family.

Mary Of Scotland.—Historical romance, with Katharine Hepburn as Mary Queen of Scots. Elaborate and impressive, but more romantic than historical. A family film.

The Great Ziegfeld. — A three-hour show about the show business, with intervals of Ziegfeld biography, William Powell as Ziegfeld, Myrna Loy as Billie Burke, Luise Rainer as Anna Held, Fanny Brice as Fanny Brice. Recommended, if you have the time.

Green Pastures.—The great folk-classic of the stage, finely transferred to the screen. For everyone in the family.

To Mary—With Love. — Myrna Loy and Warner Baxter in ten painful years of married life. The film, too, has its painful moments.

Mr. Deeds Goes To Town.—A nice, heartwarming comedy about a small-town poet who came into money and trouble. With Gary Cooper. A family film and recommended.

Small-Town Girl.—Cinderella story about a small-town girl (Janet Gaynor), who was poor, foolish, discontented and single, and who ran away with a passing stranger and was soon rich, wise, married and happy. For Gaynor fans.

Early To Bed.—Charles Ruggles and Mary Boland in an amusing comedy about a belated honeymoon. Good entertainment.

Poppy.—W. C. Fields in a screen version of an early stage success. There is romance, involving Rochelle Hudson, but it is W. C. Fields who makes the picture worth seeing.

The White Angel.—Kay Francis as Florence Nightingale. The picture is sober and biographical, but just the same Miss Francis looks pretty glamorous for the Crimea. 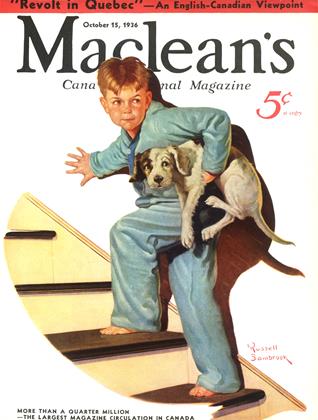