ALL ONE can say of the MetroGoldwyn - Mayer production of “Romeo and Juliet” is that when a better screen “Romeo and Juliet” is put on. Metro-Goldwyn-Mayer will probably do it; and they won’t need to—not at any rate for a long, long, time. It’s a beautiful show and a beautiful story; so dramatic and so overwhelmingly right in every detail that it will carry you right back into the Renaissance something rare in a Shakespearean production, which usually carries you no farther back than the literature period in second-year high school.

What you will probably remember longest about “Romeo and Juliet." however. isn’t the immense scholarship behind it. but Norma Shearer’s lovely performance as Juliet. Her Juliet is really a girl, ardent and young, and she gives the lovely familiar lines the freshness that belongs to youth and love and not to professional elocution on the stage. (The special sound equipment shouldn’t, 1 supi>ose. be mentioned in the same breath with Juliet, but it probably had a lot to do with making the lines come out so purely and gently.)

I^slie Howard’s Romeo, John Barrymore’s Mercutio, Edna May Oliver’s Nurse and Basil Rathbone’s Tybalt are all exceptionally fine, too; in that order. I don’t know whether Metro-GoldwynMayer undertook “Romeo and Juliet’ for love of Shakespeare, or to prove they could do it. or just to make a lot of money. Whatever their aim, they are entitled to their success.

SUZY” PUTS Jean Harlow almost in the Kay Francis class as a patient yet fascinating screen martyr. She is a chorus girl in “Suzy.” carrying on a rather unsuccessful career in London during the Great War. She marries a young Irish mechanic (Franchot Tone) who is shot on their wedding night by a German woman spy (Benita Hume.) Without waiting to make sure that she is really a widow Suzy hurries off to Paris, where, recovering from her grief, she marries a handsome aviator (Cary Grant).

As it turns out, Suzy’s first husband is a pal of her second husband, who in turn is something more than a pal of the wicked spy. They all come together eventually— tiie war apparently covered a small place after all. In the end, Suzy’s second husband is shot by a member of the spy ring and he is buried with military honors no chance of mistake this time—leaving Suzy free, after a suitable period of mourning, to return to husband No. 1. Jean Harlow gives a straightforward and engaging performance, and “Suzy" won’t bore you. But it will leave you feeling that Suzy’s life, even for a chorus girl, was rather strangely full of incident.

’TEXAS RANGERS” is a real old-fashioned Western Indian raids, cattle raids, scalping parties, smiling bad men, tight-lipped good men and everybody toting a gun; the bad men shooting first and then asking questions, the good men investigating carefully and shooting afterward. Fred MacMurray is the hero; and he is first a bandit shooting up stagecoaches, then a Ranger shooting up bandits, then a bandit again, then a Ranger again. It’s a little hard to follow all his impulses, but in the end his heart seemed to be in the right place, safe in the keeping of gentle Jean Parker. 1 don’t know when I’ve seen so much action, or watched the boys having a better time. The screen fairly pops with revolver shots. No sensible Home-and-School Club would ever select “Texas Rangers” as a picture suitable for small boys. Just the same, small boys would adore it.

DODSWORTH” is another picture that sends you away with a new respect for the movies. Sinclair Lewis wrote the novel, Sidney Howard adapted it for stage and screen and Walter Huston plays the leading rôle, so “Dodsworth” was bound to be a fine job. Just how fine and intelligent a job it is, you must go and see for yourself. It’s about Samuel Dodsworth (Walter Huston) the retired automobile manufacturer who sets out with his wife (Ruth Chatterton) to get acquainted for the first time with Europe; and how he ends by getting acquainted, for the first time, with Mrs. Dodsworth. Ruth Chatterton is good enough though a trifle overserious as the flight y Mrs. Dodsworth, and Mary Astor is unexpectedly steady and understanding as Dodsworth’s rescuer. Most of the acting honors, however, go to Walter Huston, whose Dodsworth is one of the few screen husbands you are likely to remember.

We Went to College

WE WENT TO COLLEGE” is a funnier than average comedy, partly because it has Hugh Herbert darting distractedly through the various scenes and partly because it really does capture the lunatic spirit of Old Boys’ College reunions. The story, such as it is, is about Susan (Una Merkel) the wife of a professor of economics (Hugh Herbert) and her attempt to revive a college flirtation with a prosperous classmate (Walter Abel).

The opening scenes are hilarious, the football game in which the Old Boys impulsively join is very funny, the college dramatic event is just moderately amusing, and after that the Old Boys’ old-boisterousness tends to wear you down to the point of sympathy with the attendant wives, who went to bed leaving the alumni to wear themselves out. College graduates attending reunions should make a point of seeing “We Went to College,” if only as a warning.

RVMONA” is back all in technicolor.

and is a beautiful sight to see. In fact the pictorial values of “Ramona” are so high that the story by comparison doesn’t seem very important, the screen becoming simply a frame for a series of deep-toned Spanish interiors and melting California landscapes.

The story of Ramona (Loretta Young) the beautiful half-caste girl reared in a Spanish household, who goes away with her Indian lover (Don Ameche) is told simply and poignantly, but the real value of “Ramona” is for the eye rather than for the feelings. Lore,ta Young gives a capable performance as Ramona, but hardly impresses one as an aboriginal in spite of lier blue-black hair. The Ix'st piece of acting was supplied by John Carradine as an irascible but kindly Spanish priest.

Anthony Adverse. — Hcrvey Allen’s 1,224pape novel cut to fit the sereen, but still fairly elaborate and voluminous. One of the season’s most impressive productions. A family film

Ills Brother’s Wife. — Robert Taylor, the screen’s most promising medico, with Barbara Stanwyck in a story about love and bacteriology. Miss Stanwyck has a lot of trouble, but it’s hard to feel sorry for her.

Stage Struck. — Joan Blondell’s rowdy and unusual comedy saves this from being just another backstage musical show. With Dick Powell.

Publie Enemy’s Wife.-—How a G-Man (Pat O’Brien) married Public Enemy’s wife (Margaret Lindsay) in the pursuit of duty, and how his bride turned out to be not only beautiful and good but bulletproof. Silly but ex-

Glve Me Your Henrt.—Kay Francis in a story about mother love which may make you wonder how anyone so well dressed could feel so terrible: or at any rate, how anyone so desperate could go to such trouble to fix her-

The Bride Walks t)ut.—All about a bride (Barbara Stanwyck) who wanted $50 négligées and spent the grocery money to get them. Helen Broderick and Ned Sparks supply just enough comedy to keep the audience from walking out.

Swing Time. — Ginger Rogers and Fred Astaire dancing more beautifully than evei in a picture complicated as usual by too much plot. However, Rogers and Astaire make it worth seeing.

The General Died At Dawn.—Gary Cooper and Madeleine Carroll in a sharply excitinc adventure-romance located in China. Highly recommended.

My Man Godfrey.—How a Fifth Avenue debutante (Carole Lombard) found the Forgotten Man (William Powell> on the City Dump and took him home to her crazy-rich family. Silly but often amusing.

The Koad To Glory.—People who like war pictures, if people really do. may find this worth while. With Fredric March. Warner Baxter, June Lang.

Satan Met A Lady.—Bette Davis and Warren William in a crime-and-murder mystery in which the action is too involved, the plot too remote, the dialogue too cute. Not recommended.

The Great Ziegfeld.—Broadway extravaganza with biographical interludes. If you are interested in the show business on the grand scale, both stage and screen, it is worth seeing. With William Powell. Myrna Loy. Luise Rainer.

Sing. Baby. Sin?.—Adolphe Menjou as the great lover of the screen on a holiday from everything but love. Good comedy.

I’oor Little Rich Girl.—People who can’t get enough of Shirley Temple will probably still feel they haven’t enough of her in this picture. Others will be more than satisfied 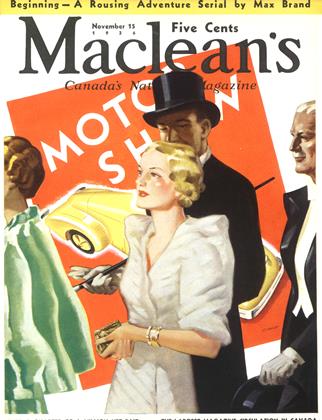