OLD of HUTCH” a popular has movie—Wallace all the elements Beery, young love, sudden riches and a gangster finish. Nothing has been left out, not even the old-fashioned Beery nightshirt; so I can’t tell you why it was that, fond as 1 am of Mr. Beery, I found the picture dragging a good deal in places.

Maybe it was the young lovers (Cecilia Parker and Eric Linden) who hadn’t enough troubles to keep them apart and who didn’t provide much excitement when they were together. Or maybe it was because the story wandered off in too many directions you got the feeling that three or four people had written plots for “Old Hutch” and had never really got together íor a final conference. There are plenty of the well-loved Beery antics in it, of course, and if you are a genuine Beery fan you won’t want to miss it. But if you are one of those who can take their Beery or leave it alone, better leave it alone.

THIS PICTURE has a good comedy idea to start with, and a good dependable comedian (Stuart Erwin) to work it out. It’s about a human adding machine named Elmer who is discovered by a trio of sideshow promoters (Betty Furness, Robert Armstrong, Edmund Gwenn) and taken on the road. Elmer’s higher mathematics don’t impress the countryfolk much, and things go badly until he gets into a friendly game of bridge in the train with the national contract champion.

What happens after that is a great com-

fort to those of us who have always tried to tell ourselves it doesn’t take brains to play bridge. Gangsters come into it and Elmer is knocked senseless; but love restores him to his normal state of partial imbecility. Betty Furness is the loved one. a tough girl with a tender conscience. You probably won’t remember “All-American Chump” any longer than most of us can remember the Rule of Eleven. (That comes into it, too, but fortunately is the only technical bridge point in the picture.) Still it’s amusing while it lasts.

Valiant is the Word for Carrie

TF YOU like success stories then “Valiant is the Word for Carrie” is the picture to see. The heroine (Gladys George) is a town character when the picture opens, with very little money and less reputation. But Carrie adopts two orphans, and discovers she has not only a fund of mother love but a very fine business talent. She buys out a small cleaning and dyeing firm, the business grows, the orphans grow, and soon they are all well established socially, and gloriously rich.

I thought the film should have been expanded to show Carrie’s struggles with cleaning and dyeing and respectability; but the author skipped that part, jumped them into wealth and switched the story to straight melodrama. The picture suffers from an overcomplicated plot, but is held together by Gladys George’s fine performance as Carrie Snider. The small-town episodes in the early sequences are particularly effective and moving.

MR. GEORGE ARLISS, all dressed up in a turban and fitted redingote crusted with jewels, has never been more

elegant than in “East Meets West.” As the Rajah of Rungay, his business is to protect his kingdom from the British on one side, the Orientals on the other. The Rajah’s day’s work includes suppressing the bootlegging business in Rungay, averting a native uprising, breaking up an indiscreet love affair between his son and a visiting English matron, arranging a hanging for the lady’s husband, and wheedling a million pounds apiece out of the English and the Eastern powers.

All this keeps the Rajah busy as a bee, but in the end the wicked are punished and the foolish corrected and everything is straightened out. Since all the people in the film were either wicked or silly— except the Rajah, who was continuously wise and good though tricky—it was hard to feel much sympathy with anyone, including the Rajah. There’s something wrong with a picture that makes you feel more and more depressed as it approaches its climax. If you go to see “East Meets West” maybe you can figure it out.

1ADIES IN LOVE” is about three J beautiful girls, natives of Budapest, who set up together in a housekeeping flat while waiting for their dreams to come true. The beautiful brownette (Loretta Young) longs for a hat shop. The lovely blonde (Constance Bennett) wants a rich husband. The cute brunette (Janet Gaynor) dreams of a home and children.

In the end each makes her dreams come true, and each (except Janet Gaynor who rarely makes a mistake) discovers that it was exactly what she didn’t want. Simone Simon, the French newcomer, pops up and takes away Constance Bennett’s young man. Loretta Young loses hers to a proud society girl. Even Janet Gaynor gets off

the track for a little; and the housekeeping fiat buzzes like a distracted beehive with the emotions of the ladies in love. It quiets down in the end, and they all move out with their broken hearts and potted plants and dreams fulfilled. It’s a charming picture, directed with a light touch and expensively turned out, like the ladies themselves. Feminine audiences will enjoy it.

The Devil is a Sissy

HPHIS STORY of three problem boys in the New York tenement district is an exceptionally fine and vivid picture. For once in a film dealing with adolescence, the boys themselves— especially Jackie Cooper and Mickey Rooney—are recognizable and genuinely moving youngsters. Gig (Mickey Rooney) is the son of a criminal who dies in the electric chair; Buck (Jackie Cooper) is his pal; and Claude (Freddie Bartholomew’) is the gentlemanly small boy who attaches himself to the other two much against their will.

It’s a genuine Juvenile Court case history told in dramatic human terms from the point of view of the boys themselves. Gig and Buck are criminals in the making, sceptical, defiant and tough, but still curiously innocent and bewildered. You won’t be able to forget them for a long time. The ending isn’t so convincing—it’s worked up a good deal with most of the grimness taken out. Still, “The Devil is a Sissy” is a picture to see. It’s one of those rare films about youngsters that youngsters themselves can look at without embarrassment. And it should be compulsory for adults.

The Gorgeous Hussy. — American historical sketch, with Joan Crawford as a politically minded girl of the time of Andrew Jackson; very gorgeous and not a bit of a hussy. Recommended.

Dimples. — Shirley Temple up to all her tricks in a story about a New York street waif of a generation ago. For Temple fans.

Craig’s Wife.—Fine screen version of the Pulitzer Prize play about the wife who thought more highly of her bric-a-brac than of her husband. With Rosalind Russell and John Boles. Recommended.

The Big Broadcast Of 1937.—The usual big annual, some of it good, some of it bad and all mixed up. Gracie Allen, George Burns, Martha Raye are among the notables present.

Piccadilly Jim. — P. G. Wodehouse wrote the story and practically everyone in the cast is a guaranteed comedian. The picture goes practically hysterical trying to make you laugh. Robert Montgomery and Madge Evans are the lovers.

Dodsworth.—A fine screen version of the Broadway success. Well worth seeing, thanks to Sinclair Lewis who wrote the book, and Walter Huston who plays the lead.

S uz y.—Life of a chorus girl during the Great War and strangely full of incident, even for a chorus girl. With Jean Harlow. Rather far-fetched but entertaining.

Sing, Baby, Sing. — Adolphe Menjou very funny as the screen’s greatest lover on a holiday from everything but love.

Texas Rangers.—A real old-fashioned western, with Fred MacMurray as the hero. The boys in the picture have a grand time; so will most of the boys in the audience.

Ramona.—The old-time favorite back, all in technicolor and a magnificent sight to see. With Loretta Young. The best technicolor experiment so far.

Satan Met A Lady.—Bette Davis in one of her dangerous moods, in a crime and murder mystery. The plot is very difficult to follow and hardly worth the trouble. Not for children.

Swing Time. — Fred Astaire and Ginger Rogers, with music by Jerome Kern. Good but not quite one of their best.

We Went To College.—Very funny comedy about an Old Boys’ college reunion. College graduates planning a return to alma mater should see it, if only as a warning. With Hugh Herbert, Una Merkel.

Anthony Adverse.—Some scenes and incidents from the Hervey Allen novel, made into a fine romantic picture. With Fredric March, Olivia de Havilland. Recommended. 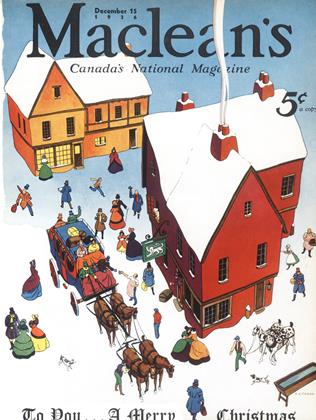