I Dream Too Much

I DREAM TOO MUCH” is so gay and fresh that it’s almost like seeing an opera picture on the screen for the first time; though this is probably just the effect of seeing Lily Pons on the screen for the first time. In addition to singing like a nightingale, Miss Pons is young, petite, and so universally appealing that she will probably be as popular with Shirley Temple fans as with grand opera addicts; which is pretty universal. The story itself is the familiar one about the young singer struggling between the claims of love and fame; the music is Jerome Kern, with “Caro Nome” from Verdi’s “Rigoletto” and the “Bell Song” from Delibes’ “Lakme” for the big numbers.

Besides Miss Pons the cast includes Henry Fonda, Eric Blore, Osgood Perkins and The Duchess, (x trained seal; the Duchess herself being worth the price of admission, whether she is idly balancing the bric-à-brac on her nose or bustling upstairs in a rage to start an argument over the disappearance of her breakfast fish. It seemed a pity she had to disappear before the picture was over. She should have been there with the other duchesses for the fashionable musical climax at the end.

CHARLIE CHAN'S SECRET” is filled with mechanical marvels all highly criminal in purpose, from a chandelier which plays music “from the spirit world” when operated by an invisible switch, to a setgun in a church steeple arranged to go off on the stroke of nine and shoot an old lady sitting in a window a mile away.

It’s extremely complicated and remote, and gives one the feeling that we will presently be having murders arranged by stellar beams from Arcturus—the kind that they used to open the World’s Fair. Charlie Chan (Warner Oland ) wanders about among these inventions culling clues, experimenting with graphite, quinine and geometry, and quoting from the Chinese poets. I f you like murders very fancy, you will probably enjoy “Charlie Charis Secret.”

SHIRLEY TEMPLE’S admirers will have a grand time at “The Littlest Rebel,” in which Shirley sings, acts, dances shakes her

finger and her curls, and probably adds another fortune to her trust account. She is the small daughter of a rebel officer in the Civil War; and when her father gets into difficulties and is put in military prison Shirley and the negro butler (Bill Robinson) sing and tap-dance their way to Washington to intercede with Lincoln. Lincoln and Shirley straighten things out between them and everything ends happily.

It isn’t a very realistic description of the Civil War, which is shown as a sort of combination of Hide-and-go-Seek and Prisoner’s Base. However, it gives Shirley and Bill Robinson, at present the screen’s most popular combination, a chance to get together over long stretches and do their specialties. And Shirley herself has lots of scope for all the cute tricks that have made a melting pot of America.

CAPTAIN BLOOD” came too soon after “Mutiny on the Bounty” to be as effective as it otherwise might have been, especially as it was billed as “the answer to Mutiny on the Bounty.” It’s a good stirring adventure picture, but it lacks too many things to be a genuinely villainous sea piece—a genuine villain, such as Captain Bligh, for one thing. Errol Flynn, a romantic Irishman, plays the part of Captain Blood, the surgeon turned private; and it may surprise some to discover Guy Kibbee, the All-American Uncle Dudley, as a British gunner of the 17th Century.

Young people will get a lot of fun out of “Captain Blood.” The boys will enjoy the sea fights, the girls the romantic adventures

of the beautiful Miss Bishop (Olivia DeHavilland.) Aside from an excess of brutality in the opening sequences, it’s a good family film.

STARS OVER BROADWAY” is another picture about singers along Broadway and their troubles, both professional and private. It’s been told too often now to offer many surprises, but often enough to go through handsomely and smoothly with a good working distribution of song, plot, love interest and clothes interest. No racketeers this time and no guns, except a small gentleman’s revolver which the hero (Pat O’Brien) carries for his personal use.

He is a talent promoter on Broadway who is about to commit suicide when the story opens because he can’t find anything to produce. Then along comes the hotel bus boy (James Melton) bursting with song and talent, and Mr. O’Brien throws away his revolver and hitches his wagon to the future Broadway star. There are the usual disappointments and worries, but in the end everything is set right—young Mr. Melton gets his contract, Pat O’Brien gets his girl (Jean Muir) and everyone ends up famous, rich and happy. There’s nothing unusual in any way about “Stars Over Broadway.”

COLLEGIATE” is for those who can see Joe Penner—they can see an awful lot of him in this picture, and only middling Penner at that. He is an amnesia victim who more or less accidentally takes up resi-

dence in a girls’ school, along with its new principal (Jack Oakie). Mr. Oakie decides to change his new property into a Charm School; so he teaches his girls to sing and tap-dance, and makes them change from middies and gym suits into gauzy frocks without any underthings. (Even in their middies they looked considerably more like grown-up Warner Brother cuties than firstand second-formers.) Frances Langford is in it and sings very prettily “You Hit the Spot,” and there was a nice little tune called “Light as a Feather in the Breeze.” The rest was mostly Joe Penner talking baby talk, and helping to modify the enthusiasm.

Ah, Wilderness!—A comedy for the family, especially for those members of it who were young in 1906. With Lionel Barrymore, Wallace Beery, Eric Linden. One of the season’s best.

A Night at the Opera.—A general wreckage of civilization, with Groucho, Chico and Harpo Marx as the wrecking crew. Top Marx, and recommended.

Broadway Hostess. — Broadway behind the scenes as it probably isn’t, and not very important anyway.

Peter Ibbctson.—Screen version of the stage play about the star-crossed lovers who used to meet in a psychic trance. Moderately eerie. Very young people won’t make much of it. With Ann Harding, Gary Cooper.

In Person. — How a moving picture actress developed publicity phobia, and how she was cured by Love (George Brent). Fairly lively comedy.

The Bride Comes Home.—Claudette Colbeit. and Fred MacMurray in a battle of the sexes which didn’t create much ringside excitement in this quarter. One of Miss Colbert’s minor efforts.

Mister Hobo.—George Arliss in a mild comedy about a tramp who became mixed up with high finance. Some will like it; others will feel that no matter how thin you slice it, it is still George Arliss.

Mary Burns, Fugitive.—Tabloid adventures of an innocent girl who gets mixed up with gunmen and G-men. With Sylvia Sydney. Fairly exciting.

Way Down East. — Old-fashioned melodrama handled so sympathetically that old-fashioned people will still be able to get a good cry out of it. With Rochelle Hudson, Henry Fonda. 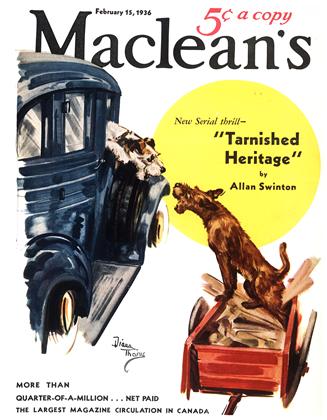