SPLENDOR" is about an old New York family who, when the story opens, are living in a state of elegant collapse in their Fifth Avenue residence. The youngest son (Joel McCrea) presently comes in with his new wife, the poor but beautiful Phylis (Miriam Hopkins.) As he was supposed to marry the sausage king’s daughter (Ruth Weston) and restore the family fortunes, everyone is badly upset. However, it isn’t long before Madame Lorrimore (Helen Westley) is plotting busily some way of making her new daughter-in-law’s beauty negotiable in cash. So Phylis is flung to the highest bidder (Paul Cavanagh), a wealthy admirer who immediately sets to work to put the family on its feet. The Lorrimore family get a town car. the younger Lorrimores get a fine apartment, Madame Lorrimore gets a new hat, Brighton Lorrimore, (Joel McCrea) gets a trip to remote Mexico. It is at this point that the rich admirer begins to hint that he isn’t doing all this for charity, and presently there are the usual scenes, surrenders and climaxes. “Splendor” is rich in gold lamé gowns and chromium interiors. Probably that’s why it is called “Splendor.”

Millions In the Air

A/T ILL IONS IN THE AIR” is really TVA Major Bowes’ Amateur Hour set to a plot. This provides for lots of programme with enough story to string it into sequences. I liked best Willie Howard as an Italian tenor who had been trying to finish a solo from Rigoletto at amateur hour ever since 1901, and was as furiously unsquelchable every time as Donald Duck in “The Orphan’s Benefit.” Wendy Barrie is the heroine, a slight, attractive girl with a small, pretty voice. She is the daughter of the soap king (George Barbier) who sensors the amateur hour, and entering as a contestant, she falls in love at sight with a handsome ice-cream vendor. It all works out as might be expected. The plot follows almost exactly the outline of the last three radio pictures, and is mostly a convenience for the specialty performers.

/T'HE VALUE of “Annie Oakley” is A chiefly that it’s a real part of America’s past. Annie Oakley did exist; she was the best woman rifle shot in history, she did tour America and Europe with Buffalo Bill

and Sitting Bull, and she may even have shot a cigarette out of the mouth of the future German Kaiser; such was the confidence everyone felt in her trigger eye. In Annie Oakley” she is played by Barbara Stanwyck and is a much beautified Annie, with eyelashes so thick you would think they might interfere with her sighting. There is a love story, which gets snarled up when the hero (Preston Foster) injures her trigger finger in a shooting demonstration. However, in the end the trigger finger is mended, and so are the broken hearts. The picture is rather cluttered unfortunately with big circus scenes which were probably more stirring in Annie’s times than they are today.

I he Magnificent Obsession

npHE MAGNIFICENT OBSESSION” A is filled with beautiful happenings, lovely clothes and sudden conversions, and there’s probably no use in my raising a feeble voice to say that I thought it was fairly preposterous. Certainly the things that happen in this picture never occur anywhere except in the movies, and hardly even happen in the movies any more. I don’t believe, for instance, that a kind word will turn a simple stone-cutter into a famous sculptor or a drunken ne’er-dowell into a great surgeon. Also it didn’t seem likely that a surgeon whose hand was shaking so that it couldn’t hold a scalpel, would be able two minutes later to perform an involved and delicate operation just because someone gave him an encouraging look through the glass partition. In fact, the only thing I liked much in “The Magnificent Obsession” was Irene Dunne’s clothes, and even these were pretty improbable. If you can really believe in the

unaccountable way people act in this picture it will probably make you cry. It was made with that idea in mind.

T'XANGEROUS” gives Bette Davis an A-^ opportunity to exercise her special type of eerie fascination. She is a downand-out actress in this picture, whom a polite New Yorker (Franchot Tone) rescues from under the table in a Coney Island honkytonk. He carries her off to his country estate, where she presently becomes sober, composed, and terribly attractive in a baleful sort of way. So it isn’t long before the hero jilts his own nice sweetheart (Margaret Lindsay) and invests his life-savings in an effort to put the actress back on Broadway. But the actress has a jinx that won’t leave her and a husband who won’t divorce her. Ridden by the jinx and accompanied by the husband, she gets into a motor accident which puts her into the hospital, cripples her husband, ruins the show, and jolts the hero at last into a state of reflection. “Dangerous” isn’t much of a story, but it is lighted at intervals by Miss Davis’s weird and fitful charm.

"yOU HAVE to be in the mood for A “Sylvia Scarlett” to enjoy it properly, with lots of time on your hands and nothing particular on your mind. It’s a relaxing sort of picture, handled with leisureliness and charm. The plot deals wâth a group of vagrants who wander about England picking up a living in odd, slightly disreputable ways. George Cukor, who directed “Little Women,” is responsible for the doings of the four wanderers, who

are, respectively, a thief, a cockney scamp, a half-witted housemaid and a girl masquerading as a boy; and they are all handled so sympathetically and goodhumoredly that they might just as well have been Meg and Beth and Jo and Amy. Katharine Hepburn is the girl who dresses as a boy, swaggering about in long trousers and a slouch hat, but so unmistakably a girl and a very nice girl that she couldn’t possibly fool anyone except the people in the picture. “Sylvia Scarlett” is a good family picture, without anything in it to keep it off anybody’s White List.

Captain Blood.—A good stirring sea-picture. Most older people will enjoy it and ’teen ages will want to see it through, twice.

The Littlest Rebel. — Shirley Temple in a story about the Civil War. Nobody gets hurt. Mild entertainment for Temple fans.

Stars Over Broadway.—Pat O’Brien as a talent promoter on Broadway and James Melton as the boy whose talents are promoted. Young Mr. Melton has nice teeth and a good voice, but the picture won’t surprise you.

Collegiate.—Two or three nice songs and a plot involving Jack Oakie, as principal of a girls’ college, and Joe Penner, as an amnesia victim, who wakes up to discover he is Joe Penner. Fair.

The Bride Comes Home.—Claudette Colbert as a needy debutante who goes to work in a magazine office, starting at the bottom and working up to be a first-class nuisance. Not one of Claudette’s best.

Charlie Chan’s Secret.—Fun with a set-gun. All about a master criminal who supplied the brains and let the family clock do the dirty work. Warner Oland as Charlie Chan helps a good deal, but the plot is more complicated than ingenious.

I Dream Too Much.—The usual operatic story, much freshened up by Lily Pons, the Jerome Kern music and a trained seal. Recommended.

A Night At The Opera.—Monkey business in the Metropolitan, with Groucho, Chico and Harpo Marx standing grand opera on its head. Highly recommended to Marx fans.

Äh, Wilderness! —A fresh and lively comedy which should be of special interest to those who were young in 1906. With Lionel Barrymore, Wallace Beery and Eric Linden. Recommended.

Broadway Hostess.—Life as it may or may not be on Broadway after nightfall, and not very important either way.

In Person.—How a moving picture actress (Ginger Rogers) developed crowdphobia and how Love (George Brent) brought her around.

I Found Stella Parish.—More troubles of an actress with her public. Kay Francis is the beautiful victim this time. Kay Francis fans may enjoy it.

Mutiny On The Bounty.—The historic seaadventure handsomely reproduced in one of the season’s best pictures. With Charles Laughton, Clark Gable, Franchot Tone. Recommended.

Rendezvous.—A lively description of spylife in Washington during the war. With William Powell at his smoothest and best. Highly recommended. 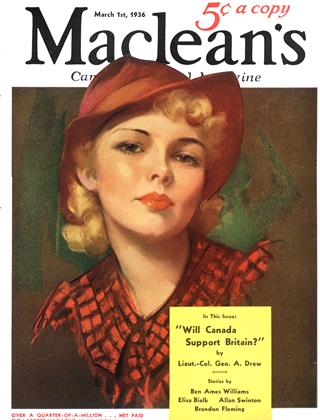