THIS DEPARTMENT has always been able to keep its head about Jessie Matthews, being put off by her

tendency to roll her eyes at times and bounce. But it must be admitted she makes a very attractive boy, reminding one occasionally of the hero in “Ah, Wilderness,” who had such trouble with drink and morals. Miss Matthews has trouble with drink and morals, too, having to drink a double brandy with one young man and share a single bedroom with two.

This provides most of the comedy in “First a Girl.” The heroine is in love with an English nobleman, a haughty youth whose high ideals always lead him to think the worst possible of everybody. This supplies the romance. I liked the dancing best. "First a Girl” is a very sumptuous production with lots of beautiful choruses, plenty of ostrich trimmings, and a big birdcage number which will probably turn Busby Berkeley green with envy.

EVERYTHING goes in this screen version of the Broadway success, and goes with a bang. Practically everyone in the cast is a comedian, and almost everyone is disguised as someone else. There are two comedians disguised as clergymen, one supposed to be a gunman and the other supposed to be a clergyman. There is Bing Crosby disguised successively as Public Enemy No. 1, a deck swabber, and a travelling nobleman with side-whiskers borrowed from a Pomeranian dog which subsequently appears disguised as a poodle. In addition to these there is Ethel Merman, Broadway singer who sometimes sings but mostly yells like the crowd outside the Bastile. The plot seemed mostly concerned with the efforts of Bing Crosby’s friends to persuade various, strangers to let Bing have their trousers. Charles Ruggles, as the gangster disguised as a clergyman, supplies the best of the comedy. It’s amusing entertainment if you don’t mind the crazy confusion.

A Tale of Two Cities

1 i 'HERE ISN’T much doubt that when the movies discovered Dickens they got hold of Something. Nobody in the present century can build a plot so richly and strategically, or keep the interest at such a high pulsating level. Nobody else certainly could distribute twenty important parts among twenty important people

and keep them all moving, all related and all important. Ronald Colman plays the leading rôle in “A Tale of Two Cities,” and handles the romantic and mocking part of Sidney Carton in a way that could scarcely have been improved if Charles Dickens himself had been behind the director’s megaphone.

My favorite performer in the picture, however, was Blanche Yurka as Madame Defarge, the baleful Parisienne who used to knit the names of her victims into shrouds at the foot of the guillotine. There is nothing diluted about Miss Yurka’s malevolence; it’s pure cyanide from beginning to end. The film is fairly grim in the guillotine sequences, which just stop short of rolling Ronald Colman’s head in a basket. On the whole, between Madame Defarge and Madame Guillotine “A Tale of Two Cities” isn’t quite the picture for anyone under ten years of age.

AN AMUSEMENT park, the setting T*for Eddie Cantor’s latest picture, is so perfectly adapted, with its wild and desperate contraptions, to the Cantor genius that it’s a wonder no one thought of it before. With gangsters to provide the menace and a night-club setting to supply the usual choruses of beautiful girls, “Strike Me Pink” is fairly exciting and elaborate, as well as funny.

Ethel Merman comes into this picture, too, as a night-club singer leaning against a lamppost and shouting hoarse reproaches at someone who has left her with no support, it would seem, but the lamp post. This fortunately is the only sombre note in the picture. It all ends up in an oldfashioned chase sequence, bigger, wilder and longer than any chase sequence ever seen before. A lot of “Strike Me Pink” is

really funny—the jujube scene, for in stance, and the invisible poker game. These episodes should convince anyone that Eddie is a genuine and lovable comic, and not just simply a radio gagster or a popeyed little man in a hurry.

/VEILING ZERO,” the first flight picture in months, is a swiftly paced and highly dramatic film, even if most of the action takes place on the ground. All the excitement of flight, storm and danger is there, but instead of getting it through faked photography we hear it, far more dramatically, as it is transmitted through the radio in the airport office. Fragmentary messages tell the story, building it up to a climax in which the audience is finally almost as overwrought as the performers.

The action is superb, the characterization, especially in the case of James Cagney and Pat O’Brien, is sharp and believable, but it seemed to me that an airport in which the staff fought, made love, swapped assignments, stole each other’s girls and knocked each other out cold, all in office hours, wasn’t quite the set-up for promoting confidence in flight transportation. “Ceiling Zero,” I imagine, is sounder as entertainment than as airport routine.

TN “WHIPSAW” pretty Myrna Loy, having got her contract straightened out, comes back to settle some problems of the underworld. She is an accomplice of a jewel thief in this picture, and is much wanted both by the police and by a gang of thugs. None of this bothers her much or makes her think badly of herself till love comes along, upsetting all her standards of disreputability. She is, it seems, a girl

that things happen to. She can’t sit down to a ladylike drink without having rolls of bills thrust into her hand; can’t get into a plane without two gangsters taking the seat behind, can’t even stop off at a country house in a rainstorm without having to assist at the birth of twins.

It is when this latter event takes place that she finally goes to pieces, and you realize that as far as respectability is concerned Miss Loy is in the bag. I’m not sure that “Whipsaw” is what is proudly called Adult Entertainment, but it is very bright and amusing to watch. Spencer Tracy is the detective who redeems the heroine to respectability.

The Informer.—Voted the best picture oi 1935. As it is still being shown, nobody should miss it. With Victor McLaglen.

King Of Burlesque.—How a Broadway showman married into Park Avenue and what happened. A fair story, involving elaborate glimpses of Broadway shows and Park Avenue clothes. With Warner Baxter.

Your Uncle Dudley. — Mild and pleasant small-town comedy, with dependable Edward Everett Horton supplying most of the laughs. Family film.

The Magnificent Obsession.—A long heartache of a picture, involving vice and miraculous reform, blindness and sudden recovery, and love triumphant. Just a long headache for this reviewer. With Irene Dunne, Robert Taylor.

Dangerous.—All about the beautiful but baleful actress born to ruin the lives of men. The story is routine, but Bette Davis manages to be pretty baleful.

Sylvia Scarlett.—All about four picturesque vagrants (Katharine Hepburn is one of them) who wander about England, providing casual entertainment. The story, too, wanders a good deal, and the entertainment is casual but pleasant. A family picture.

A Night At The Opera.—A number of fine public institutions, including grand opera, given the complete works by the Marx Brothers. As funny as possible.

Millions In The Air.—Major Bowes amateur hour, transferred to the screen and provided with a plot. The amateurs, most of them old hands from Broadway, provide most of the entertainment.

Splendor.—Miriam Hopkins goes from rags to riches and from riches to rags. Not much excuse for her behavior, and not much reason for the picture.

I Dream Too Much.—Formula opera picture, much brightened by the voice and presence of Lily Pons.

Charlie Chan In Shanghai.—Charlie Chan (Warner Olandi smooth and likable as usual. But the story sounds as though it had been written with the editor beating on the door.

Mutiny On The Bounty.—Still a chance to see the best sea story ever filmed. With Charles Laughton, Clark Gable and Franchot Tone.

Captain Blood.—Another sea epic. Not so adult as “Mutiny On The Bounty,” but a fine picture to take your nephews and nieces to on a Saturday afternoon. 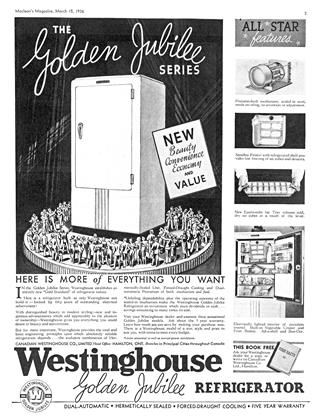