MODERN TIMES,” in spite of its awe-inspiring machinery and underlying significance, is really just an old-style Chaplin picture, and I don’t know what better anyone could ask. Its background has been brought up to date and considerably beyond, but Charlie himself hasn’t changed either his method or his madness. It is clear that he doesn’t think very highly of modem times, and he says so superbly, with slapstick and pantomime. (He didn’t think much of soldiering either, it will be remembered, and said so in the same language in “Shoulder Arms.”) He doesn’t hesitate either to repeat a worthy gag, and there is no reason why he should, since the Chaplin antics and fancies are as good for a laugh today as they were twenty years ago.

If there are stretches in “ModernTimes” that seem a little thin and prolonged, they are all sequences from which Charlie himself is absent. Since nobody should be allowed to grow up without having seen the great Chaplin, child attendance at “Modern Times” is practically compulsory.

T ADY OF SECRETS” is about a girl who had a baby in wartime France and brought her up as her sister to keep the neighbors from talking. It’s simple enough as you write it down, but it costs Ruth Chatterton nearly two hours of complicated anguish to get the situation stated on the screen. There are some minor episodes in the picture and a few familiar people, but they don’t cheer things up much. Marian Marsh is the daughter and Lionel A twill is the father— a proud, mean man who devotes his life to making trouble for his family. If you are giving up all forms of amusement for Lent or for any other reason, we recommend “Lady of Secrets.”

The Man Who Broke the Bank at Monte Carlo

'“PHIS IS quite a different sort of comedy, being an elegant, not to say stylish, piece with Ronald Colman in the title rôle. A Paris taxi driver by profession, he is a Romanoff by birth, as most Paris taxi drivers are, in the movies, unless they

Art Chapman, the centre on the second team, has at last won recognition after nine years of campaigning in the CanadianAmerican and National Leagues. It is an honor which he truly deserves because he has never stopped trying despite the many handicaps which he has faced. He was never very strong, but during the past two years has added about twenty pounds to his slender frame, and it was this weight which undoubtedly has had so much to do with his improved play. One of the best puck raggers in the league, Chapman became somewhat discouraged while a member of the Boston Bruins, because Art Ross utilized his great stick-handling by only using him when the Bruins were a man short. After he joined the Americans and was placed with a regular line, he immediately showed his ability and has advanced by leaps and bounds since that time.

AS HIS right wing, Chapman draws •/"x Cecil Dillon, the first ÿnited States bom player to make the managers’ AllStar team. Dillon, however, learned to play hockey in Canada, where his parents moved when he was a boy. One of the remarkable things about Dillon is that he is a “left-handed” right wing.

When he joined the Rangers Lester Patrick needed a right winger, so decided Mo use Dillon in this position. He was an

happen to be Hapsburgs. He goes to Monte Carlo and there cleans out the Casino, carrying away three million francs in good stage money.

The Casino authorities naturally want to recover it, so they try to lure him back to the gaming tables. They appeal to his superstitions, his acquisitiveness and his honor in vain, so finally fall back on sex appeal (Joan Bennett), which of course works. He goes back to Monte Carlo, and you scarcely need to be told what happens after that. “The Man Who Broke the Bank at Monte Carlo” is a smooth and handsome picture, and while it won’t give you any unforgettable experience it is fair entertainment.

WITH CHARLIE CHAPLIN and Harold Lloyd both back on the current screen, it would seem that the old-fashioned happy days are here again. Harold Lloyd is no immortal in the Chaplin sense, but just the same a great many people will probably find “The Milky Way” much funnier than “Modern Times.” It is a good deal faster than the Chaplin film, and there are no overtones of social despair.

It is the story of a milkman (Harold Lloyd) who accidentally knocks down the world’s heavyweight champion and as a result is catapulted into the sporting world himself. The whole narrative is cut down to gags and crises, with Harold Lloyd supplying most of the crises and generously leaving the gags and wisecracks to Adolphe Menjou, Verree Teasdale and Lionel Stander. The laughs are planted right out in the centre of the

screen where the audience can t miss them. They are g(X)d expert laughs, too, and very few of them miss the audience. “The Milky Way” is Grade A screen comedy, not to be missed by anybody.

THE CHIEF innovations in “Riffraff” are that it deals with the tuna-fish industry, never before touched in movie romance, and that Jean Harlow appears in it with her hair dyed brownette. Spencer Tracy is the hero, a tuna fisherman and the best on the coast, while Jean is a factory hand who cans the tuna that Spencer Tracy and his fellow fishermen catch. There are glimpses of the canning factory and a dock strike and then, as usually happens when the movies touch labor trouble, “Riffraff” begins to travel vaguely in circles. Sometimes it’s tuna fishing, sometimes it’s strikers and lockouts, sometimes it’s Jean Harlow and mother love—she has a cute baby, born in the Women’s Reformatory. In the end “Riffraff” doesn’t so much wind up as run down. I’m afraid you won’t learn much from it about tuna fishing, or labor settlement, or even mother love.

HT HE SCREEN version of this Broadway success is a fine picture, well produced and beautifully acted—especially by Leslie Howard—its only fault being a slight tendency to talk the audience’s collective arm off. The hero, Alan Squier (Leslie Howard), is an unsuccessful writer who wanders off the desert into a gasoline and Bar-B-Que station, there to converse

with the proprietor’s pretty daughter (Bette Davis) about life, art and man’s destiny.

He continues to chat under the guns of visiting bandits, and even picks up where he left off when lying on the floor, later, with bullets whistling overhead. If it weren’t such good stimulating talk, you might almost feel like lying down on the floor yourself before it was over. The whole thing gets really exciting at the end, with Humphrey Bogart as the bandit sitting above the group in the station and threatening instant death to anyone who moves a finger or even shifts the topic of conversation. Very young people won’t find “The Petrified Forest” much fun, but adults, who like wise and witty talk, with or without gunplay, should find it rewarding.

A Tale Of Two Cities.—The Dickens masterpiece turned out in Metro-Goldwyn-Mayer’s best style. A family film and recommended.

First A Girl.—Elaborate film musi-comedy. The story is about a girl dancer (Jessie Matthews) who turns male impersonator. Most of the action is supplied by Miss Matthews’ legs.

Sylvia Scarlet. — Another girl - into - boy picture. Katharine Hepburn is the girl this time who puts on trousers. The story, from Compton McKenzie’s novel, is spread rather thin over a number of episodes and large stretches of country.

Strike Me Pink.—Eddie Cantor as the manager of an amusement park which provides all the crises you could imagine and some you mightn’t have thought of. Often very funny. A family film.

Rose Of The Rancho.—Revival of the old Belasco success and a little dated, though Gladys Swarthout helps a great deal with her voice and looks. A family picture.

Ceiling Zero. — Fine flight film, in which most of the action takes place on the groin'd and most of the excitement comes over the radio. With James Cagney. Recommended

King Of Burlesque. — Another behind-thescenes Broadway picture, which sticks close to formula but is reasonably entertaining. With Warner Baxter, Alice Faye.

Ah, Wilderness.—The Eugene O’Neill comedy is a screen play for the family to enjoy— especially those members of the family who remember 1906. Recommended.

Dangerous.—Bette Davis in a high-voltage performance as a beautiful actress with a bad past. With Franchot Tone. Not highly recommended.

Splendor.—The jittery life of the terribly rich. Miriam Hopkins is the heroine. Not recommended. 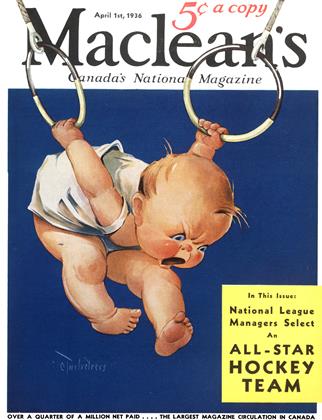