ROSE MARIE” is a picture that should make everybody happy— public, producers and principals.

With Jeanette MacDonald and Nelson Eddy as the singing lovers, it was giltedged box-office even before it went into production. Not to take any chances, however, the producers have added some new songs and more fine scenery than you would meet in a day’s traveloguing.

Jeanette MacDonald is a famous prima donna who sets out to find her brother (James Stewart), hiding in the Canadian wilderness from the Mounted Police. Nelson Eddy, of course, is the particular Mountie he is avoiding. So the two meet in their common quest somewhere north of Quebec, and fall in love to the music of the Indian mating call. The mating call doesn’t drown out the voice of duty, however, or make the hero forget that he is a policeman first of all and a lover and baritone only when it doesn’t interfere with his job. It all works out satisfactorily, of course. “Rose Marie” is handsome, tuneful, romantic and lively. If you want lavish entertainment, here it is.

Next Time We Love

'"THE PREDICAMENT of a lady in love with a policeman who has just arrested a member of her family is a believable one. But the love troubles of the two young Tylers (Margaret Sullavan and James Stewart) in “Next Time We Love” just didn’t seem to make sense. Though these two went through life frustrated and longing, there wasn’t actually anything between them that a little sensible discussion wouldn’t have cleared up.

First, the young wife sends her husband off to his foreign correspondence job in Rome without telling him she is going to have a baby, because a baby might interfere with his career. Then he goes off to China and contracts a fatal malady and won’t come home or tell her he is sick, thinking to save her feelings by letting her think he is merely sick of her. Both Margaret Sullavan and James Stewart are intelligent and attractive, and the picture itself is nicely and plausibly handled. But it doesn’t add up somehow, and I’m afraid, it’s just a lot of nonsense.

"V/fAE WEST’S latest venture might just as well have been called “Salvation Nell,” though if it had been called “Salvation Nell,” “Klondike Annie” would have done just as well as an alternative title. In other words, Mae has written her latest drama of sex and crime with one eye on her old loyal public and the other on the censors. It isn’t likely that either group will be very enthusiastic about “Klondike Annie.” My own feeling about Mae West is that when she is bad she is very, very good, and when she is good she is horrid. As long as she is burlesquing wickedness she is funny, but when she starts to go straight it is still burlesque but no longer amusing.

and starts up to Nome. Converted en route by a travelling evangelist, she decides to help Nome and herself to a better life. Victor McLaglen is the hero—a sea captain who assists Mae in her flight. He hasn’t much to do except stand about scratching his head, trying to figure out his peculiar but fascinating passenger.

T TSING THE Province of Ontario as a background and the professional experience of Dr. Allan Roy Dafoe as a basis and manipulating both with a great deal of freedom, Fox Films have built up a heartwarming folk picture out of the arrival of the Dionne quintuplets. The story really belongs to Jean Hersholt, and people who go to see the quintuplets in a five-star sister act may be a little disappointed. Marie, Yvonne, Emilie, Cecile and Annette arrive in nature’s own time—in this case well on toward the end of the film. Since, fortunately, they are still too young to take direction, they just sprawl and stagger about the nursery, every quintuplet for herself.

“The Country Doctor” is a little too long. The boy and girl romance, for instance, could have been omitted and the Country Doctor’s epic activities—not to mention Mr. Dionne’s—left to carry the story. On the whole, however, it’s entertaining and well handled.

ÜXCLUSIVE STORY” turns out quite a few dark pockets in the New York underworld, from the numbers racket to the gang ignition of the Mochado—presumably the Morro Castle. It’s one of those pictures where the fun, if you call it fun, is in watching to see whether the marked victim will be shot before he reaches the next corner, and whether the innocentlooking gift box, ticking away on the desk, will go off before it is discovered, leaving the hero, in the words of the film, to be “scraped off the walls.” A tough and knowing picture, it has Stuart Erwin as a reporter, Joseph Calleia as a gunman, and even the fastidious Franchot Tone doing a little private torturing in the interest of law and order. “Exclusive Story” is

fast, exciting, violent and frequently brutal. Decidedly not for the pre-school ages.

Last of the Pagans

'T'HAT PRIMITIVE people invariably live a life of beauty, affability and ease is one of the things we have never been able to believe, or at any rate to take much interest in; possibly because the movies insist on it so much. However, for people who like primitive drama played by native actors, “Last of the Pagans” is probably worth while.

The two handsome pagans most involved in the plot are separated part way through the story, the hero being carried off to work in the phosphate mines, the heroine being assigned to a native chief. They come together in the end after much hardship and yearning, and drift away to start life afresh; for that is one of the simplicities of South Sea life—you can always move to another island. There is the usual South Sea scenery, palms and combers and breadfruit trees, and much native ceremonial. It’s a little on the educational side.

The Milky Way.—Harold Lloyd’s latest picture, about a milkman who turned prizefighter. It’s a fast, hilarious comedy which Adolphe Menjou, as the prizefighter’s manager, does a lot to help, and Harold Lloyd, as the milkman, does nothing to hinder. A family film and recommended.

Modern Times.—Charlie Chaplin’s comedy plus his reflections on modern life. The comedy is old-fashioned but very funny, the reflections are serious and worth everybody’s attention. A family picture not to be missed.

Lady Of Secrets.—Ruth Chatterton suffers terribly in this picture and so did we. Not recommended.

The Man Who Broke The Bank At Monte Carlo.—A smooth and worldly comedy-romance about love and gambling. With Ronald Colman, Joan Bennett.

Riffraff.—Labor problems in the tuna-fishing industry, and the more personal difficulties of Jean Harlow as a beautiful tuna-fish canner. Not as unusual as it may sound.

A Tale Of Two Cities.—Charles Dickens’s story of the French Revolution done up in Metro-Goldwyn-Mayer’s best style. With Ronald Colman. A family film and recommended.

Dangerous.—Bette Davis in the picture that won her the Academy Award. Except for Miss Davis the picture hasn’t much distinction.

Strike Me Pink.—Tremendous big comedy, dealing mostly with the crises in the life of an amusement-park manager. Eddie Cantor is the manager, and Cantor admirers will be richly satisfied. A family film.

Rose Of The Rancho.—The old Belasco triumph, much freshened up by the voice and presence of pretty Gladys Swarthout.

Broadway Hostess.—Don’t give it a second thought.

Ceiling Zero.—The personal side of the mail night service. Excitingly handled and finely acted by James Cagney and Pat O’Brien, but it won’t make you feel like trusting your life, or even your mail, to the air travel companies.

A Night At The Opera.—Strange interlude with the Marx Brothers. One of the season’s funniest comedies.

Splendor.—Break-up of the old Park Avenue aristocracy, or from rags to riches and return, with Miriam Hopkins. Not recommended.

FARMERS are being offered a method of combating drought effects. It is called “chiselling” the soil. A homemade plow that digs a deep furrow is used to scratch down to the hardpan and bring it to the surface in flakes. There the hardpan mixes with the dry, loose topsoil, keeping the powdery surface from drifting and being blown away. Success of the method is attested by the 1934 harvest on an Oklahoma farm with an average of twentyeight bushels of wheat per acre compared to three or four bushels per acre on neighboring farms. The plow was used to dig furrows about forty inches apart, ten to sixteen inches deep and only three inches wide. When one of the few rains of the

season came, the water disappeared into the narrow furrows instead of running off into roadside ditches and carrying the soil with it. The “chisel” plow can be made in any blacksmith shop at small cost. An ordinary strip of steel sixteen inches long, three-quarters of an inch thick and about three inches wide is used. Its end is sharpened but not pointed. The steel strip is then curved to fit a lister beam from which the moleboard and frog have been removed, the point protruding about three inches below the point of the lister beam and held in place by four bolts. To get the best results, the furrows should be run soon after harvest and again before sowing.— Popular Mechanics. 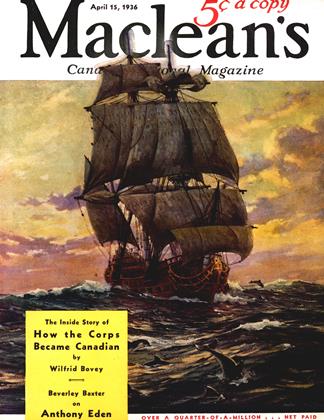