FORTY YEARS ago nobody saw anything amiss in naming a little boy Cedric Fauntleroy and dressing him up in a plush suit, lace collar and long golden curls; nobody, that is, except the little boys of the period who had to bear the brunt of the fashion. Perhaps Pro~ ducer Selznick was one of those little boys. At any rate, in the latest version of `~Little Lord Fauntleroy" he has taken the curse off the Fauntleroy tradition by presenting his young hero (Freddie Bartholemew) in sensible clothes and a neat haircut. - -

Some of the polite mannerisms of the Fauntleroy heir have been allowed to go west along with the velvet and curls. In the present version Cedric gets into a street fight, punches, bites and urges Mickey Rooney to “hit him on the snout.” Parents and grandparents, however, will be able to check up on the main points of the story. “Dearest” (Dolores Costello) is still present, and the gouty old earl (C. Aubrey Smith) and, of course, the dog and the pony. It’s a lavish and lovingly detailed production, a good picture for indulgent little boys and girls to take their mothers and aunts to on Saturday afternoon. The mothers and aunts will have great fun.

T AUREL AND HARDY’S comedy version of “The Bohemian Girl” seemed to me as funny as anything the two ever turned out. But as I usually feel that way about all the Laurel and Hardy wonderworks, I may not be the one to say. In addition to its two stars, with their invaluable assistants, Mae Busch and the crosseyed man, “The Bohemian Girl” has a good story and some fine, stirring, oldfashioned opera music. Most of the gags are new, or new inventions on familiar ones; and there is one wine-bottling scene in which Laurel mistakes himself for one of the bottles that is worth waiting to see all over again. In fact it’s all good, alternately funny to watch and pleasant to listen to, and shouldn’t be missed.

The Trail of the Lonesome Pine

CONSIDERED simply as an achievement in advanced technicolor, “The Trail of the Lonesome Pine” is an impressive picture. It is clear, sharp and detailed, an outdoors technicolor in which it is possible at last to tell the trees from the

woods and the birds from the flowers. The producers have handled it very much as though it were an ordinary black and white, leaving the color composition to nature, and the result is something approximating the world we live in, only a little more exciting and richly toned.

The subject was probably selected for its scenic rather than its story value. One grew a little tired of the senseless mountain feud between the Tollivers and the Fagins, and the sight of Henry Fonda reaching down his squirrel gun to go off and shoot up the neighbors. Still, even if the humans in the picture didn’t behave very sensibly, the technicians and photographers were at their best and have given us at last an outdoors film which doesn’t look either like a series of postcards or like nature on a color jag.

nPHE ONLY possible new treatment for the wife vs. secretary situation would be to have W. C. Fields as the boss, Patsy Kelly as the secretary and Zasu Pitts as the sad, hurt wife. Needless to say, this isn’t the way it is done in the screen version of the Faith Baldwin story. Jean Harlow is the secretary, Myrna Loy the wife, and Clark Gable the boss—the publisher of a five-cent weekly who works aw'ay in one of those strangely glamorous business offices where almost anything might happen (except business), dictating letters to Jean Harlow without apparently any notion that she is a rather attractive girl; until Myrna Loy puts the idea in his head and starts the trouble.

Everything in this picture—people, clothes, interiors—is as beautiful and eyefilling as possible, but the story seemed to me to be fairly unexciting. It appeared to be doing good business, however, with a long line-up of eager patrons, mostly fem-

COLLEEN” is another great big, dressy musical show, whose story, spotted here and there between special numbers, is about an eccentric millionaire (Hugh Herbert) and his adventures in the retail gown business. Hugh Herbert’s eery giggle, an elaborate fashion show, and a good number by Jack Oakie and Joan Blondell, “Boulevardier of the Bronx,” are the features of the picture; plus the new dance team of Ruby Keeler and Paul Draper—the latter too much like the Astaire-Rogers combination to be very original and not enough like it to be entirely satisfactory. On the whole, “Colleen” is fair entertainment. It is lavish and lively, it obviously cost the producers lots of money, and it has a number of tuneful songs that go pleasantly in one ear and out the other. Similarly, the producers’ money probably went out one pocket and right back in the other. It’s that kind of dependable, if familiar, musicomedy.

The Voice of Bugle Ann

T) UGLE ANN is not the heroine of this picture though you might easily think so, not only from the title but from the point of view developed in the story. Bugle Ann is a dog, the property of an ardent dog lover (Lionel Barrymore), and when Bugle Ann disappears, her owner goes over and shoots his next-door neighbor (Dudley Digges) whom he suspects of the murder. For this he is sent down for twenty-five years, which is presently commuted to four, and he returns to enjoy the respect and admiration of the community which

had never liked Dudley Digges anyway. (As it turned out, Mr. Digges didn’t kill Bugle Ann at all).

Perhaps if you were a very passionate dog lover and it was Be-Kind-To-Animals Week, you might be able to accept the point of view of “The Voice of Bugle Ann ;” i.e., that the murder of Mr. Digges was not only justifiable but highly commendable. I thought the idea rather far-fetched in spite of all the talking that was done to make it convincing. In fact, the talking was the worst feature of the picture.

The Story Of Louis Pasteur.—A sensible, true and exciting account of the life of the great French chemist. With Paul Muni at his best. Highly recommended to everyone.

The Ghost Goes West. — How a Scottish ghost was shipped along with his ancestral castle to Florida. Very ingenious and amusing. With Robert Donat—A family film.

Desire.—Adventures of a beautiful jewel thief (Marlene Bletrich) and an engineer (Gary Cooperi and all very handsome, gay and romantic.

Klondike Annie.—Mae West, reformed by the censors, goes out to reform the sourdoughs, and proves that salvation is anything but free. Not recommended.

Dangerous.—Bette Davis as a jinx actress who wrecked everything she touched—plays, men. lives, even motor cars. Miss Davis’s performance is good, the picture fair.

Splendor.—Miriam Hopkins in a fine, new, well-turned-out picture with a shabby old plot.

The Milky Way.—Harold Lloyd as the milkman who turned prizefighter. His best comedy in years. A family picture.

A Night At The Opera.—The demon Marxes up to their latest lunacies. One of the season’s funniest pictures.

Modern Times.—Charlie Chaplin in a comedy about the age of mechanics which is both funny and disturbing. A family film that everyone must see.

The Petrified Forest.—Screen version of the Broadway success involving love, gunmen and literary talk in a gas station in the Arizona desert. A good play turned into a good picture. With Bette Davis, Leslie Howard. 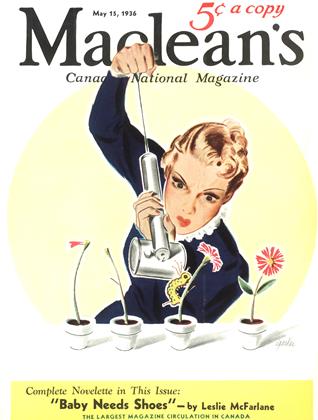