when the picture opens, with nothing but a game of checkers played by wireless to amuse him. He is a radio operator and already in the incipient stages of petticoat fever when beautiful Myrna Loy, accompanied by her fiancé (Reginald Owen) drops in from the sky their plane was bound for Montreal but ran out of fuel. It’s a small world and presently the hero’s London fiancée turns up in Labrador, too, to take him away from Miss Loy. just as he has succeeded in taking Miss Loy away from Mr. Owen.

All these complications are eventually swept away by the impetuous Mr. Montgomery. to the accompaniment of much funny business and lively dialogue. Three cheerful Eskimos help to keep things amusing, but Robert Montgomery bears the weight of the comedy; so Montgomery admirers will get plenty of entertainment from “Petticoat Fever.” Non-admirers i.e., people who get irritated by the persistent Montgomery cuteness and insouciance—will probably think it more amusing to play checkers by radio.

" I MLI. WE MEET AGAIN” is a spy romance of the Great War, involving the fortunes of an English actor (Herbert Marshall) and a Viennese actress (Gertrude Michael). The hero joins the British Intelligence Service and goes to Germany to spy on an armament plant. There he meets his former sweetheart (Gertrude Michael) who is assigned to spy on him. In the meantime, the head of the German Intelligence Service (Lionel Atwill) is spying on both of them. It’s a little complicated, with espionage and counter-espionage, but it all straightens out with the escape of the lovers over the Dutch border.

“Till We Meet Again” isn’t one of the more memorable spy pictures; it’s a little slow in getting started, and rather involved without being very ingenious. Herbert Marshall performs with his usual melancholy distinction, but Gertrude Michael didn’t seem to me to add greatly to the excitement of the piece.

nrriE PLEASANTEST film of the A month, if not. indeed, of the whole season, is “Mr. Deeds Goes to Town.” It’s a Frank Capra film, which means it has Jots of sentiment, lots of good humor and

lots of surprises. It’s about a small-town poet, Longfellow Deeds (Gary Cooper), who suddenly inherits twenty million dollars and goes to New York to find helpful ways of disusing of it. He is surrounded at once by eager applicants, all anxious to be helped or to help themselves, and all heartless and scheming; all, that is, except a beautiful girl re|x>rter (Jean Arthur) who is scheming like the rest, but whose heart, before the picture is over, gets safely back on the gold standard.

'Hiere is a grand wind-up in a courtroom scene in which all the good people get their rewards and all the bad ones their deserts, and Mr. Deeds is left with his clothes ripjxxl to pieces by his admirers but with his illusions returned to him intact. “Mr. I )ceds ( ¡oes to Town” is half an hour longer than the average picture, but, thanks to Frank Capra and Gary Cooper, seems at least half an hour shorter. Don’t miss it.

'T'lIIS SCREEN adaptation of the Broadwaysuccess, “The Children’s Hour,” has been a good deal altered from its original form, but is still fine, intelligent high-tension drama. Three high-priced stars, Miriam Hopkins, Merle Oberon and Joel McCrea, are in the cast, but the central figure is thirteen-year-old Bonita Granville who plays the part of little Mary Tilford, a demon schoolchild.

Mary Tilford is that rare child character —a little girl without a single redeeming feature, and in the picture, as in the play, she manages to run completely hog wild with the lives of three sensitive, intelligent adults.

Miriam Hopkins and Merle Oberon are the teachers whose lives and profession are ruined by the Tilford child, and these two glamorous girls approximate a pair of serious school teachers as closely as possible -which isn’t so very close. However, the picture belongs to Bonita Granville; and while it will take a lot of Shirley

Temple to take away the taste of Mary I ilford, little Miss Granville’s performance isn’t a thing to be missed.

rTvHIRTEEN HOURS BY AIR” presents a new shake-up of old material. It s the story of a transcontinental air voyage, with the usual mixed crowd of passengers; an heiress, a killer, a hysterical governess in charge of a maniac child, a detective, a romantic pilot, and a mysterious foreigner—all people who are so hopeless to try to mix socially and who can make things so exciting for each other a mile up in the air with the barometer dropping. To make things more complicated, the detective is disguised as a doctor, the foreigner is under suspicion as a gangster, the heroine seems to be a jewel thief, and the maniac child is equipped with a water pistol.

Fred MeMurray and Joan Bennett, as the principals, are attractive and competent, and Zasu Pitts, as the governess, flutters weakly as usual just above the level of consciousness. “Thirteen Hours by Air” is a lively and not too serious way of making you forget your troubles—if they’re not too serious troubles.

The Moon’s Our Home

' at least one romance in which the hero and heroine fight at the drop of a hat. In “The Moon’s Our Home,” Cherry Chester (Margaret Sullavan) and Anthony Amberton (Henry Fonda) tumble each other in snowdrifts and try to tear each other to pieces on the floor, with minor altercations along the way, accompanied by hurled atomizers and crashing bric-a-brac. Margaret Sullavan particularly, who plays a motion-picture actress with a raging temperament, is fit to be tied; in fact she is tied in the final scene, in her own jacket sleeves, by the resolute hero. So they sail

away in a police ambulance, bound probably for the moon their home, where at least they won’t find anything to throw at each other.

This picture is lively and amusing most of the time, and, owing to the charm and intelligence of the two stars, isn’t quite so rough and tumble as it sounds. The dialogue is entertaining and so are many of the situations, but the whole thing tends to collapse into a mere scuffle at the end. 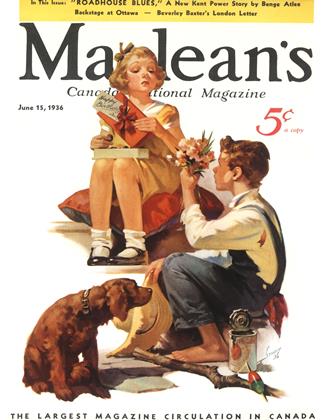