THINGS TO COME” is a huge, wonderful, fantastic spectacle film which shows civilization wiped out within the lifetime of the present generation, then restored, wrapped in Cellophane, for those of our descendants who think it worth while to survive. Within five years, if everything goes badly, our present society will be demolished, and after that there will be pestilence, barbarism, dictatorship and universal melancholy. Eventually, however, what is left of science will take over what is left of society and miraculously rebuild the world into something a little like a hundred Radio Centres in one. But even in this modernized world, with radio, television and air-conditioning reaching their highest pitch, there will be plenty of trouble for everybody. You won’t be able to catch a cold in 2036, but you may be shot to the moon in a rocket, which is likely to be considerably more fatal.

This is the future which H. G. Wells and Producer Alexander Korda have constructed between them, in the year’s most extravagant and lavish spectacle. While the picture doesn’t make it clear that things to come will be any vast improvement on things as they are, no one should miss seeing it. “Things To Come” is one of the most imaginative and exciting pictures of the year and not to be missed.

THE CINDERELLA story has been on the go for a good many centuries, and it must be good for it still manages to hold the interest. In “Small Town Girl,” Cinderella (Janet Gaynor) is a poor little grocery girl who is picked up by Prince Charming (Robert Taylor), a rich and dazzling young surgeon from Boston. And she stays out all night and gets into trouble, and when the adventure

is over she runs back home to her small town, where she is followed by the hero and restored to wealth, happiness and lots and lots of lovely clothes.

It’s a modem version of the story, of course, but the oldfashioned appeal is still there, enabling us to sit wide-eyed as ever at the knee of Metro-Goldwyn-Mayer, watching the tale unfold. There isn’t a great deal to be said either for Robert Taylor’s behavior or his acting in most of the picture, but Janet Gaynor is as sweet and appealing as ever and still keeps her invincible hold on the box-office. Most people will be willing to sit through “Small Town Girl,’’ but ’teen-age girls will get the most fun out of it.

The Farmer in the Dell

IT SEEMS to be the rule that the plays people write about Hollywood are generally brighter and more amusing than the plays Hollywood writes about the world outside, and “The Farmer in the Dell” is no exception. It tells the tale of an Iowa farmer (Fred Stone) who moves with his family to Hollywood, the move being made in order to put the pretty daughter (Jean Parker) into pictures.

Instead it is the farmer who gets into the movies, much to his surprise and discomfiture. He submits to his career with a sort of tearful indignation that is often very funny, and there is considerable lively kidding throughout of Hollywood and Hollywood executives. “The Farmer in the Dell” is no screen masterpiece, but it has its bright moments and on the whole offers better entertainment than many more pretentious pictures.

THE Ex-Mrs. Bradford” is a detective mystery of a very complicated, not to say distracted, sort. When a jockey dies under suspicious circumstances, Dr. Bradford (William Powell) urged on by his ex-wife, a writer of murder mysteries (Jean Arthur), decides to investigate. Shortly afterward a corpse drops through the door into Dr. Bradford’s consulting room, and it isn’t long before a folding bed lets down, revealing another corpse. ((Don’t ask why all these corpses: the picture doesn’t take time to explain).

None of these morbid circumstances depress the Bradfords, who continue to wisecrack while the dead drop all about them. The motives for the killings are rather confused, but the suspects are unmistakable and they are all lined up finally and sorted out.

There’s a suggestion of “The Thin Man” and also of “Star of Midnight” and “Rendezvous.” In fact, you get the feeling that the plot of “The Ex-Mrs. Bradford” was

obtained by mixing half a dozen other plots in a hat. It’s exciting and lively, however, and the best plan is to enjoy it while it lasts and not try to figure it out later.

A Message to Garcia

A MESSAGE to Garcia” is a highly exciting though romanticized description of an actual episode in American history—the delivery by Lieutenant Rowan of a message from President McKinley to General Garcia, assuring the latter of American support in the struggle of Cuba against Spain. Fox Films have added certain necessary elements to the original story a beautiful girl (Barbara Stanwyck) who assists Lieutenant Rowan (John Boles) in his hazardous adventure; a shambling ex-sergeant of Marines (Wallace Beery) who also lends a hand; a very bright monkey who has a bit part in a café the same one, if I have any memory for faces, which turned up in “Follow the Fleet;” a villainous international spy (Alan Hale); and a galloping rescue charge for the grand wind-up.

I liked Wallace Beery best, and after that Alan Hale. John Boles suggests the romantic tenor rather than the hard-bitten soldier of fortune, and Barbara Stanwyck always seems a little too practical to lie romantic, besides sounding as though she had sinus trouble. However, “A Message to Garcia” dejiends more on action than on acting and is excellent adventure entertainment.

EVERY Saturday Night” is a mild little comic strip of a picture describing the domestic adventures and misadventures of a “typical American Family”—father, mother, grandmother and five children ranging in age from five to twenty. Though five children and two cars would seem to put the Evers family a little outside the typical group in these hard times, their problems are all recognizable ones— boy friends and girl friends, allowances, bedtime hours, table manners, the use of the car, etc.

The various crises and episodes are strung together without much sequence, and the general continuity is likely to remind you of a train of box-cars. However, families in general will be interested in seeing their difficulties illustrated on the screen and “Every Saturday Night” (to be run henceforth, comic-strip fashion, as “Our American Family Series”), should prove a real success in neighborhood houses.

“Rotten,” she insisted. “You were trying to do something for me, and I practically slapped your face. Can you forgive me?”

“Bunk.” He smiled at her. “It was a tactless mistake. But you see, I—we didn’t know you felt that way.”

She asked, because she really did not know, herself:

“Why—that this place is something apart—separate. That you don’t want it touched.”

Ellen looked down. Was that it? Just her wish to protect Hobby House, to defend it from change? Was that all? She said nothing and presently he went on:

“I knew it was hard for you. with me coming back and facing you. I knew you were tom. I thought buying the place might help you over the hurdle.” Then he added honestly: “But that’s no credit to me. I was prompted. It was Kendall’s idea.”

She nodded. Yes, it would be Mac’s idea. He would play up like that, to the last losing stroke. She remembered how she herself had told him—was it only last night?—that the place held her. He had thought this would free her. Without meaning to, she said aloud:

“I know,” Phil agreed quietly. “We were both wrong. There’s a different answer to it, isn’t there? I should have known.” He paused. He turned toward her on the bench, his dark eyes grave and devoted on her face. He tt;x>k her hand. “Ellen,” he said, “come away with me. We’ll start over. We’ll get free of all the ties. 1 can give you things now. Will you?”

SHE LOOKED at him for a long moment before her voice came. The question was out now, facing her. It brought her only distress. There was nothing dishonorable in his asking it. He wasn’t betraying anything—not in their special circumstances. No. It was she who felt guilt. Guilt, because she was going to refuse him ! The top of her mind knew how incongruous that was.

He dropped her hand. She felt him withdraw a little, though his voice was soft and steady.

The guilt rose in her. He was faithful. She was not. She felt herself a traitor. But she could not lie.

Silence shut down over them. He sat still. She stared before her miserably. There was a terrible confusion in her, but no change. She did not love him. She faced the fact, feeling sad and empty, and not able to see beyond it at all. After a while he moved and cleared his throat. And without any warning he asked her the stunning question:

“Ellen, you love your husband, don’t you?”

She jumped. Actually, she felt herself start convulsively. She could half believe that she heard a click, as if a switch closed somewhere.

“You love your husband?”

She heard the words in her head, and she heard her heart begin to answer them louder and louder, like a bell ringing. Everything shifted and dwindled and was drowned out by the crescendo. It was such a plain, piercing statement. She had been a stupid child, clinging to the past and hiding in it. She might have kept on. She might never have grown up, if the past had not confronted her like this and been abandoned for good. But it had confronted her and suddenly, she had grown up. Confusion and indecision and dismay were all gone, leaving only one simple fact. It wasn’t new. It had been there, shouting at her for months and she had hushed it. Now she couldn’t hush it. 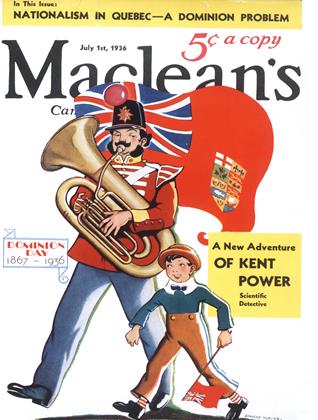